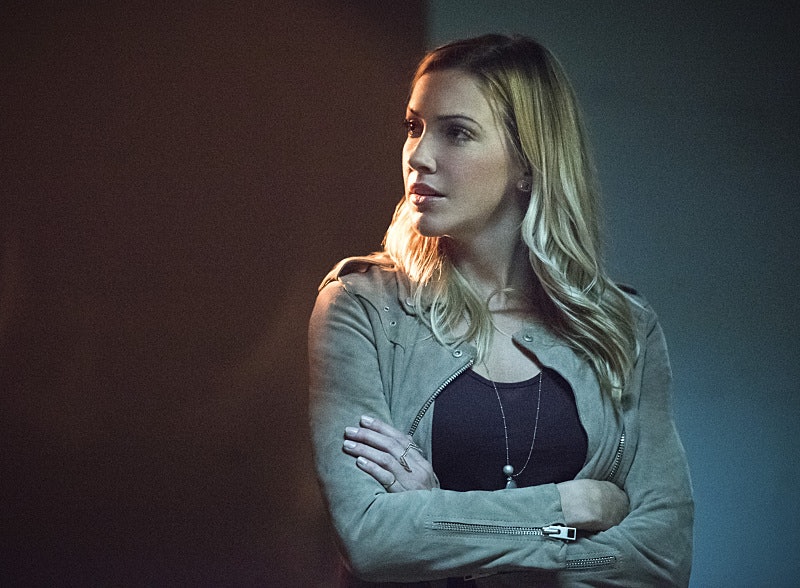 Though we may not know who, someone is going to die on Arrow Season 4. That's a guarantee. During the season premiere, "Green Arrow," there was a quick flash-forward to six months in the future. There, we saw the aftermath of someone's funeral with Oliver — and Barry Allen — standing by a gravestone. Oliver is clearly very upset, and Barry apologizes for missing the funeral (because of the new Flash villain Zoom, you know). However, the audience doesn't get to see who the grave is for in this scene. It could literally be anyone right now, so it's time to start getting worried about everyone. Still, there is one possibility that has stood to me more than others. Will Laurel be the one to die on Arrow this season?

The fact is, whoever dies has to be someone who is close to Oliver and knows Barry, since both show up in matching black suits, but Oliver seems to be more affected by the death. Laurel definitely fits that description, and it's not the only reason why I have a bad feeling her time on Arrow could be running out.

Of course, I understand that some fans will be doubtful of this prediction. Killing off Laurel would be a huge thing for the show to do, and she is the Black Canary, after all. Plus, she's finally working through things with her dad (sort of), has a good relationship with Oliver (most days), and stepped up to the plate when he took some time off from vigilantism. Laurel has also formed a great relationship with Thea, having an almost big sister-like bond with Speedy. But having a good life does not mean you're safe on Arrow.

The fact that killing off Laurel would be such a huge move for Arrow is actually part of what makes it so likely. Her death would cause a huge ripple through Team Arrow, leaving them grappling with her loss for months, though not to the point of devastation that someone like Felicity dying would bring.

We also need to remember that Sara just came back to life. Lance now has both of his daughters — until one of them is gone again. He is always on the edge of a breakdown, and I don't think Arrow is going to let him simply rebuild a happy family with both Sara and Laurel. Sara can't be the one to die, because she just came back and logistically, is going to star on the new spinoff Legends of Tomorrow . Laurel, on the other hand, is trying to establish herself as a masked vigilante, and still finding her footing. One wrong step could be the end of her.

If you know the Green Arrow comics, you know that it's really Oliver and Laurel who pair off and get the heck out of Star — formerly known as Starling — City. That doesn't look like it's ever going to happen with the path Arrow is taking right now, especially since Olicity is finally blossoming. That may be a good thing for fans, but it also means Laurel's character has already diverged so much from her comic book counterpart, her story could go anywhere — or come to an end.

Laurel has more enemies this season than anyone else, because while the rest of Team Arrow is focusing on taking down Damien Darhk and his H.I.V.E., the Black Canary seriously pissed off the League of Assassins. Those guys know how to hold a grudge, and she's facing a ton of threats at once. I don't want to see Laurel go, but right now, it seems like Arrow is laying the groundwork for Oliver and Barry to meet at her grave sometime in Season 4.