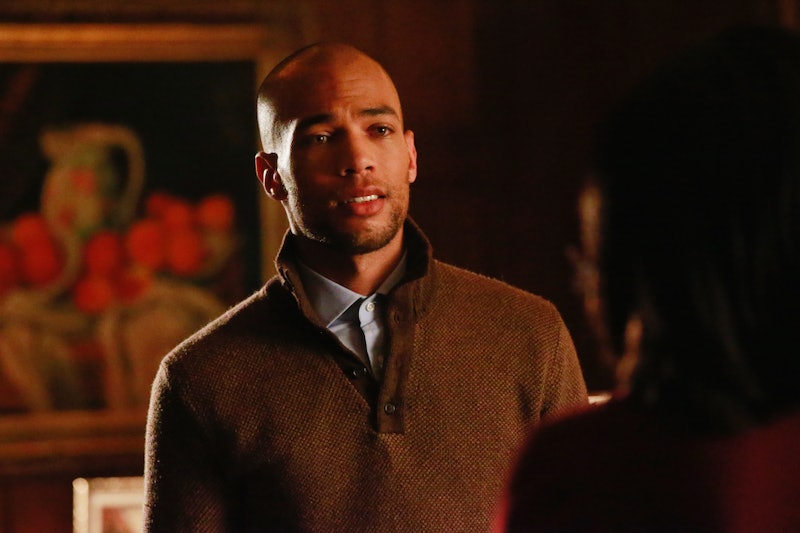 If there's one one takeaway lesson How To Get Away With Murder has taught us, it's that we should trust absolutely no one on the show. When you're covering up a crime, lying is the name of the game and these characters know how to play extremely well at this point. (Hey, remember when they were just innocent law students? They've come a long way, baby!) So if we can't trust even our beloved core characters, then any newbies that come into play definitely deserve a closer look. Because, odds are, they're probably hiding something. And that's precisely why I'm having a hard time trusting Annalise's client, Caleb. There's just no way this guy is completely innocent in all of this. But what exactly could Caleb be hiding? On HTGAWM , it could be just about anything.

Now I'm not saying that he and his sister Catherine necessarily killed their parents. On this show, whenever you're supposedly guilty of something, that's usually later proven to not be the case. (It's called How To Get Away With Murder, not How To Advertise Your Murder, after all.) But it's clear from that recent flash forward scene that he's certainly guilty of something. I mean, just look at all of that blood on his nice, undoubtedly expensive sweater.

I hope he knows a good laundry service because all that red is definitely going to leave a stain. It was an intriguing — if not slightly confusing — twist when Michaela left her Keating comrades to go see a very distraught Caleb, who not only was covered in blood, but also began inquiring about someone's well being. "How is she," he asked Michaela, who immediately responded by saying, "Good." Clearly, that was yet another lie, though he seemed to buy it for now. But we still have no idea who this mysterious "she" is.

Given the blood on his sweater we could assume that it's Annalise, but that seems a little too easy for such an intricate show like this. Perhaps it's in reference to Catherine who has been suspiciously MIA in all of the flash forwards we've seen so far. Or maybe he's responsible for killing the prosecutor lady, Emily Sinclair. Right now, it could be anyone at this point.

Then there's always the teased romantic status of Caleb and Michaela's relationship to consider. The two of them may or may not be living together, so why isn't she being completely forthright with him? Does that mean she doesn't trust him? Is she afraid of what he'll do if he knows the truth? Or is lying so second nature to all of them by now that she just can't help herself? Either way, there's a bigger story going on here than meets the eye and I can't help but feel like Caleb will end up being at the center of it all.

For a refresher on Season 1, watch Bustle's drunk recap below: