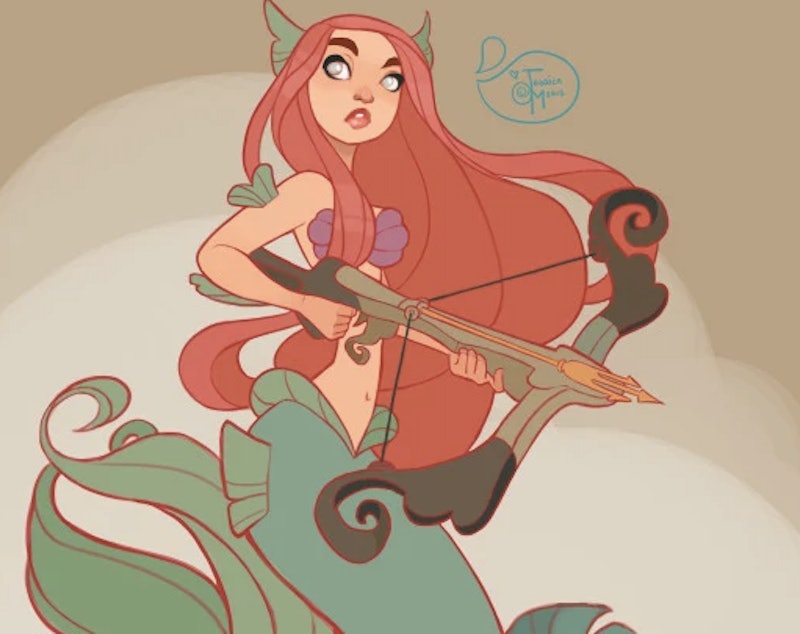 As a girl who spent her childhood pretending to be Princess Aurora and G.I. Joe's Alpine in equal measure, I always craved a happy medium. I mean, c'mon — Disney princesses love a good accessory, so it stands to reason they'd dig accessories that double as weapons. And now they can, thanks to a set of fierce renderings by artist Jessica Madorran featuring Disney princesses reimagined as warriors.

It's not a far-fetched concept if you really think about it. By definition, a warrior is a person who fights in battles and is known for having courage and skill. Hello! Let's break this down. Snow White fought against the evil queen and, oh, you know, a poison apple-induced coma. Cinderella fought against her stepmonster and wicked stepsisters. Aurora fought against eternal sleep, and Pocahontas fought against deforestation. Ariel fought against tradition and a maniacal sea witch. Jasmine, well, she fought against the patriarchy. Obviously Mulan needs no explanation. And the list goes on, as it were. So, the warrior was always within Disney princesses, simply waiting for someone to come along and dredge it to the surface — to actualize Disney princesses' inner badasses. Madorran was that person.

"Disney has a strange ability to captivate and entertain generations of people and, for me, it has also inspired me," Madorran told Bustle. "My Disney series began as fan art of characters I love. From the first sketch of Beauty and the Beast, it was really just meant to be my interpretation of what Disney had already made. But once I put that rapier in Bell's hand the idea was there for so much more." It was in that moment that Madorran fully grasped her intention. "Being able to portray these characters as the 'not so helpless' ladies they really are is the real motivating factor behind these drawings. In my Princess series so far, I have tried to give each character a sense of strength while also giving them a weapon that is both a little bit unexpected and at the same time appropriate to their circumstance," she shared with us.

"These ladies are definitely not damsels in distress! I have thoroughly enjoyed creating this series and am ecstatic for the enthusiasm that people have shown for the designs. I hope to continue finishing this series with a couple more of my favorite princesses and leading ladies soon."

Obviously, we'll all be on the lookout for that. And hey, if you're in search of a last minute Halloween costume idea, what could be better than dressing up as a Disney princess who just so happens to also be a deadly assassin? It's the best of both worlds — my childhood self is at peace. Check out the makeover Madorran gave your favorite Disney femmes and join me in wishing Mattel would make a line of toys like this. In the meantime, though, I'll settle for convincing my husband to let me put him on a chain come October 31 à la the badass Belle below.

Who needs Prince Phillip when you've got a battle spear the size of his head? See also: That dress, you guys. That dress.

3. Ariel, aka The Little Mermaid

Flounder alone is enough to give one nightmares, never mind Ariel's crossbow. But you've gotta give Madorran credit, 'cause trident arrows were a stroke of genius.

So sweet. So pretty. So fully capable of bashing in skulls with a hail. How quaint! Rapunzel has definitely been given an upgrade since her days of wielding a frying pan.

If Jasmine and Wolverine met, fell in love and made little finger-bladed babies, this new and improved Jasmine would be one of them. And how cute, er, fearsome is Rajah?

Dual-wielding swords give Snow White more than a little edge over the evil queen. No word yet on where Bashful, Doc, Dopey, Grumpy, Happy, Sleepy, and Sneezy have wandered off to, but clearly this chick is holding down the (tree) fort.

Belle's iconic yellow ball gown has been given a hood, and she's been given a poetically rose-adorned French rapier. Hopefully Hollywood sees takes a cue from this rendering for next year's big screen adaptation with Emma Watson.

It looks like Mulan can finally stop wondering, "When will my reflection show/Who I am inside?"

Head over to Jessica Madorran's Tumblr to drool over all of her drawings (I'm partial to her Alice in Wonderland).