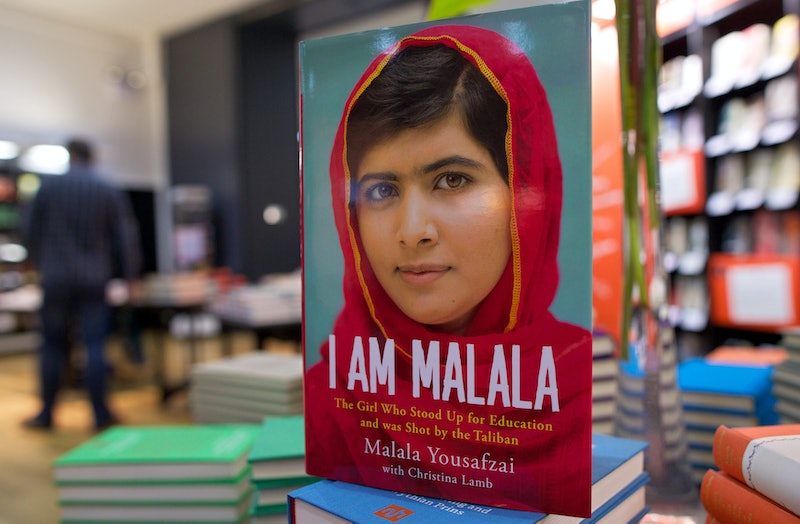 There’s a good reason that “provider of snacks” is the most coveted role when you and your book club are divvying up assignments every month. You can’t go wrong — everyone loves snacks. But selecting the next book you’re all going to read together? That’s a lot more pressure. And all you book-loving book club readers out there have to admit: Nonfiction titles for book clubs aren’t always everyone’s first choice when it comes to the next great read.

Don’t get me wrong — I totally understand why nonfiction doesn’t get as much love as the traditional book club go-to, the novel, does. After you’ve kicked off your shoes, snuggled into the couch with your best pals, and are about to dive headfirst into a glass of pinot grigio and some Whole Foods carrot cake, the last thing you want to do is start talking about real-life topics that are either: a) just kinda boring, b) way too complicated to discuss over cake, or c) so polarizing they remind you of that time you got kicked out of your poli-sci seminar in college. I don’t blame you.

But diehard nonfiction lover that I am, I also know how transformative reading nonfiction can be; and I know that a carefully curated list of nonfiction titles for your book club is guaranteed to create the space you and your fellow readers need to think more broadly, talk more openly, and engage in some really healthy debates — the kind that will bring you and your pals even closer than ever. You might even learn something new; both about the world and each other.

Get ready to take your book club to a whole new level (at least for a few titles, until it’s time to break out the Jane Austen again.). Here are nine nonfiction titles that your book club will love, I promise.

This is the book that I, and presumably readers everywhere, was talking about with my girlfriends for weeks after I read it. Heck, I'm still talking about this book pretty much every chance I get. Witty, hilarious, and really thought-provoking, Roxane Gay's Bad Feminist is like an invitation to ask your best friends their opinions on all subjects formerly taboo. Boyfriends you find unimpressive, indulgently banal reality television, the political implications of that one move your BFF always strikes on the dance floor — it's all fair game after this read.

An Unquenchable Thirst by Mary Johnson

I have never read a journey of self discovery as fraught with tension as author and former nun Mary Johnson's. In An Unquenchable Thirst Johnson takes readers into the convent and back out, as she describes the two decades she spent serving as a nun in Mother Theresa's order of the Missionaries of Charity. Filled with the uncertainties of coming-of-age, experiences of forbidden love, and the search for a meaningful life that I think all women encounter upon leaving girlhood behind, this memoir is beautiful, haunting, and will definitely give your book club a lot to talk about.

I Am Malala by Malala Yousafzai

This is one of those nonfiction titles that people just can't seem to stop talking about, whether they've read it or not. If you haven't, definitely consider making I Am Malala your next book club read. After Malala Yousafzai stood up against Taliban law and demanded her right to an education, she was almost killed for her bravery. As a champion of girls' education around the world, and the youngest-ever Nobel Peace Prize winner, Malala's story will have your entire book club inspired to tears in no time.

Paris Without End by Gioia Diliberto

Gioia Diliberto is one of the modern masters of biography, and her true story of Ernest Hemingway's first, fascinating wife, Hadley Richardson, is proof of this. Paris Without End takes an intimate look at the woman who accompanied Hemingway through his early rise to literary fame — residing at the center of the Parisian ex-pat community, spending time with infamous figures like the Fitzgeralds, Gertrude Stein and Alice B. Toklas, and frequenting the literary salon scene of the golden 1920s. Credited with being the only woman that Hemingway never stopped loving, Hadley Richardson is definitely deserving of a book all her own.

The Zhivago Affair by Peter Finn and Petra Couvée

If you haven't gotten around to reading Doctor Zhivago yet, read that novel first and then dive into The Zhivago Affair — it's a book club two-for-one deal. When Russian writer Boris Pasternak first wrote Doctor Zhivago in the 1950s, there was no possibility of the book being published in his home country. Critical of the Soviet Union and the Russian Revolution that led to its creation, the book was smuggled out of Russia and published widely in the West. Leave it to those rabble rousers at the CIA to print the book in Russian and smuggle it back in during the Cold War. This story is so fast-paced and captivating your book club won't even remember it's actually nonfiction.

The Disappearing Spoon by Sam Kean

This is a weighty little book that might not automatically seem like a book club choice. But, I think it's a really interesting read, and if nothing else it'll lead to some super therapeutic talk about all those traumatic high school chemistry class experiences (remember sitting next to the cute guy in 3rd period with goggle lines on your face every day?) If you've ever wondered about the scandal behind the history of the periodic table — or, OK, even if you haven't — The Disappearing Spoon will make you and your book club feel like the cast of The Big Bang Theory for at least one evening.

The Orchid Thief by Susan Orlean

You'll suddenly look at those orchids you give your mom every Mother's Day differently. Susan Orlean definitely makes the obscure fascinating in her work of investigative journalism The Orchid Thief . From the edge of the Florida everglades to flower shops and shows around the country, The Orchid Thief explores the underground world of the black market flower trade (who knew?), profiling some of the men and women who earn a living by flower stealing, smuggling, and selling. Your club can follow up this one with the movie adaptation, Adaptation.

Filled with all the heartbreak and sometimes unavoidable, complicated humor that accompanies death and dying, Rachael Hanel's memoir We'll Be the Last Ones to Let You Down takes readers into the life of a childhood spent surrounded by the dead. As the daughter of a gravedigger, Hanel was familiar with both death and cemeteries her entire life, but she didn't have her first earth-shattering experience with grief until her teen years. Covering life and death, cemeteries and small town America, this is another nonfiction title with all the beauty of a novel that your book club will definitely be glad they read.

Autobiography of a Face by Lucy Grealy

This memoir/autobiography tells the story of writer Lucy Grealy, who was diagnosed with cancer as a child, and as a result had a large portion of her jaw removed in order to save her life. Utterly heartbreaking, deeply moving, and refreshingly unsentimental, Grealy, who died of a heroin overdose in 2002, writes of what she considered the greatest tragedy of her life — the bullying that resulted from her surgery and her lifelong battle with her feelings about her appearance. Autobiography of a Face will make you think deeply about illness, survival, bullying, and the residual effects of childhood trauma, and will definitely spark some meaningful conversation.

More like this
30 Books To Read This AAPI Heritage Month
By K.W. Colyard
10 Must-Read New Books Out This Week
By K.W. Colyard
Zosia Mamet Opens Up About Her Eating Disorder
By Zosia Mamet
Watch The Emotional Trailer For Dolly Alderton’s 'Everything I Know About Love'
By Bustle UK
Get Even More From Bustle — Sign Up For The Newsletter