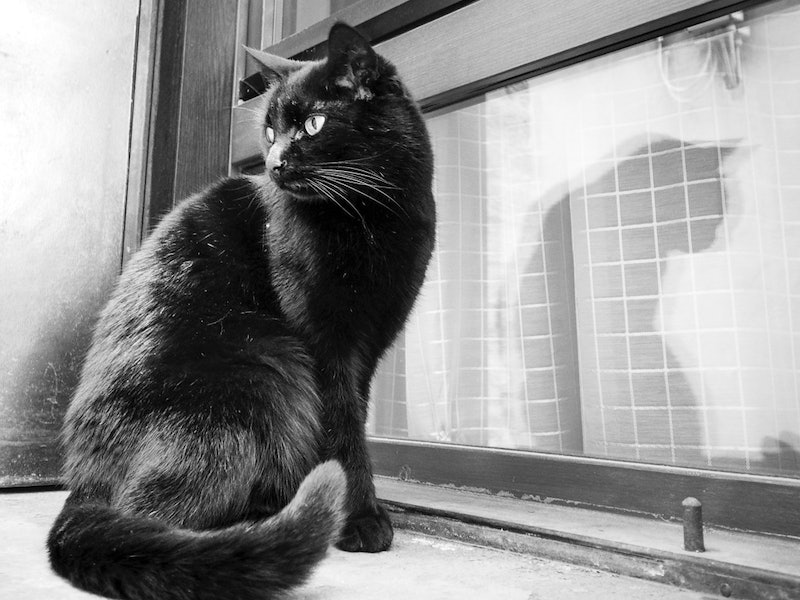 Have you ever wondered why black cats are "bad luck?" Like the vast majority of the Internet, I love cats in every way, shape, and form imaginable — including, of course, black cats. If I can find it in myself to love hairless cats, which quite honestly can be a teeny bit off-putting even to the most ardent cat lover like myself, there's certainly no way I'm going to let mere centuries of superstition get in the way of my adoration. If a black cat crosses my path, you can bet I'll be chasing the animal around trying to pet it for at least half an hour. If you think this is a humorous exaggeration, by the way, think again: In college, I was late to no fewer than six rehearsals and two tests because of cats.

Historically, though, people have been rather less enamored of black cats, leading to superstitions that persist even today. But where did their feared reputation come from? In honor of National Black Cat Day earlier this week, Chris Poole of the YouTube channel "Cole and Marmalade" illustrated the history of black cats' relationship with humans, from their auspicious beginnings to their current state in the modern day.

It's a well-known fact that ancient Egyptians worshiped cats, including black ones, but the stellar feline reputation began to tarnish in Europe during the Middle Ages, largely due to their newfound association with witches. Stray cats were often cared for by elderly women who lived alone — the precise type of person who soon became the targets of witch-hunts. As these kinds of things usually do, superstitions soon escalated: According to the video, the story goes that a father and son were traveling home one night when a black cat crossed their path, so they threw rocks at the animal until it ran away into a suspected "witch's" house. The next day, the woman in question was apparently injured, causing locals to assume that witches could turn into black cats at night. Naturally.

This superstition made its way to the Americas just in time for the Salem witch trials, and the association between black cats and witches is still strong today. However, black cats aren't universally hated. According to the video, they're actually considered symbols of good luck in Ireland and England these days, and the Scottish believe that black cats are signs of impending good fortune. As is the case with most things cat-related, though, Japan wins — black cats are frequently featured in business, shop, and restaurant windows because they're believed to bring prosperity.

That being said, black cats still have a ways to go to clear their name. Research has shown that they remain in shelters longer than other cats, are more likely to be euthanized, and are at a higher risk of animal abuse on Halloween thanks to their association with the holiday. The bottom line, however, is this: The color of a cat's fur has nothing to do with what goes on in your life, other than the joy of owning a cat. Come on, people.

If all this doesn't make you want to go out and adopt 13 black cats, I don't know what will. Check out the video below: