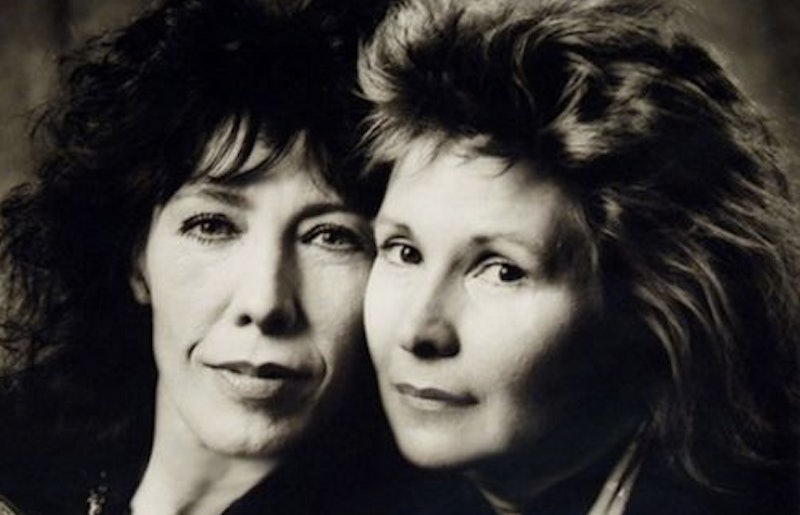 I can't say for sure, but I think this latest celebrity marriage is going to last. Lily Tomlin and Jane Wagner have gotten married after being together for 42 years. Forty. Two. Years. Yes, I feel pretty confident that this isn't going to end in divorce. A couple other celebs could maybe take a tip from the ladies and wait a little bit longer before deciding to wed.

It was an eventful New Year's Eve. I was hobnobbing with the attractive Madeleine and her hubby, the gifted Andrew Lloyd Webber, in Barbados in a gorgeous mansion by the sea... And my longtime friends, Lily Tomlin and her love, the writer Jane Wagner, got married on the eve of 2014. ... My wish is that their happiness will be as great as their combined talents.

It is one of the most delightfully snobby descriptions ever written. Don't you just want to join Smith with a cocktail and a caftan and gaze out over the open sea while spouting anecdotes about your old pal Andrew Lloyd Webber? Anyway, back to the story at hand, Tomlin and Wagner got married!

After the Defense of Marriage Act was ruled unconstitutional last August, the couple decided that marriage would be a possibility for them. Tomlin told E! News,

You don't really need to get married, but marriage is awfully nice. Everybody I know who got married, they say it really makes a difference. They feel very very happy about it. No rings, no bridal dresses. Maybe we'll be dressed like chickens.

The comedienne and author likely did not dress as chickens because Smith probably would have mentioned that.

Congrats to Wagner and Tomlin! We think you two are really in it for the long haul!