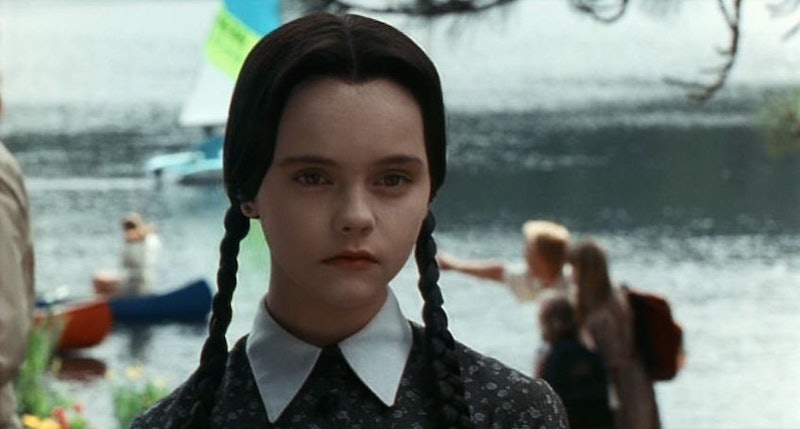 Growing up in the 1990s, I always admired goth girls. They seemed so fearless, giving zero f*cks about what other people thought of their dramatic style. There were certain accessories that most goth girls of the '90s owned as well, all of which made them look like part of a team while still maintaining unique styles. While I never adopted the gothic look for myself (in fear of being shunned by the popular kids), I couldn't help but admire it from afar.

In terms of gothic archetypes in the '90s, there was the simplistically styled goth who wore a black dress, tights, and boots just like Wednesday Addams. There was the bad gal goth who, like Nancy Downs of The Craft , fused goth style with some strong grunge vibes, often resulting in outfits comprised of tartan pieces, black lips, and a devil may care attitude. You might also have seen the Victoriana goth who wore jewels and clothing reminiscent of the Victorian era.

Totally owning your style and not caring about what anyone else thinks is the epitome of cool. Here are 13 things I saw the goth girls of my day wearing, all of which I wish I could've dabbled in myself.

IMO, black lipstick will always be synonymous with a gothic aesthetic. It's a way to instantly show the world that you don't want to fit into a traditional feminine gender stereotype. You can wear your heart on your lips instead of your sleeve, showcasing the color of your soul to the world.

The rule for '90s goth boots was: The more buckles, the better. The taller, stomp-ier, and more embellished boots were the best kind.

If boots weren't your thing or they were too hot to wear in summer, a goth girl would have been seen wearing a pair of novelty creepers, some of which had the addition of pinstripes and zipper details.

As a '90s goth, your parents may have been incredibly strict and you might have had to provide parental consent for a facial piercing, which arguably led to the popularity of fake piercings.

Obviously black nail polish was a must-have item for any goth of the 1990s, but it would often be worn horrendously chipped because goths had way more on their minds (like questioning the meaning of life or trying to make voodoo dolls) than removing their nail polish.

Anything that made you look totally hardcore was right up a goth girl's street.

A novelty bag in a goth-inspired shape such as this coffin one was an accessory many goth girls would have killed for.

Ripped tights were an accessory that your mom likely wouldn't have wanted you to leave the house in, which made them utterly perfect.

Perfectly pretty with a hint of funeral chic, these lacy fingerless gloves were ideal for Victoriana goths.

For angsty teens wanting to keep the world at arms' length, a studded choker would have sufficed.

One of the most iconic symbols in gothic history is arguably the cross. Worn as a pendant, it could be used to keep evil and mystical beings at bay.

Wearing a crystal pendant was a super cool way for a goth girl to add some occult vibes to her outfit and get the whole school wondering if she practiced witchcraft.

A velvet pouch was the crème de la crème of goth girl accessories. It would instantly add a mysterious edge to your ensemble and have people wondering what you kept inside. Tarot cards? Or the dismembered fingers of your enemies?

To be honest, it was probably just your lunch money.