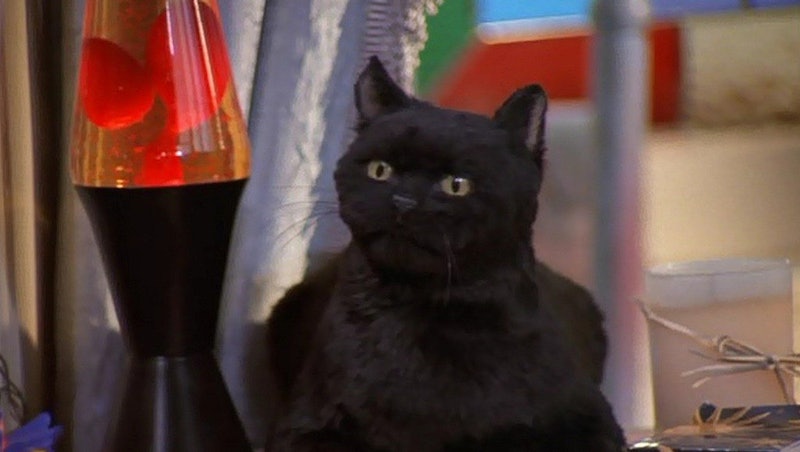 As much as I love my cats, I have a confession to make: I would love to spend my day with Salem from Sabrina, the Teenage Witch . Not only was he TV's coolest cat, Salem was Sabrina's best character. Sure, there were a lot of TV cats to choose from that could hit the number one spot, but none of them are as great as Salem. And, sure, Aunt Hilda was fun, and Sabrina had all the best sitcom mishaps, but the show would have been nothing without Salem's running commentary, witty comebacks, and desire to eat all the things.

Salem was a man once, but he was also the best cat Sabrina's family could have asked for. He talked, he plotted world domination, and he enjoyed quality snuggle time. Salem was a total boss despite being stripped of his witch powers, and he was usually the smartest guy in the room — especially if Harvey happened to be standing in it at the time.

No one tell my cats, but Salem has always been my dream furry friend. He also happens to be my favorite Sabrina character, because no one can compete with a sassy, talking ball of fur as adorable as Salem.

1. Salem Got All The Best Lines

Sabrina, Aunt Hilda, and Aunt Zelda got owned by Salem in every single episode. He had comebacks for their comebacks. The cat was quick on his feet, and, even though his sharp tongue routinely got him tossed outside by Sabrina, it was totally worth it.

Hey, total world domination goals count as ambition. Even when he was turned into a cat for fighting for his right to rule the world, Salem never gave up on his dreams. I admire that in a cat.

If Sabrina wanted comforting, she went to her aunts. If she wanted the cold hard truth... well, she didn't have to go to Salem, because he was already there to (metaphorically) point, and laugh, and then dispense honest advice sans filter.

4. Salem Was Cool With Costumes

You know how your cat will basically claw your eyes out for trying to put one little bow tie around his neck? Well, Salem dressed himself up in delightful costumes that brought joy to your life every single week.

Being sentenced to 100 years as a cat would bring most people down, but Salem (mostly) embraced his life as a cat. He enjoyed the finer things in the feline life, like pampering, cat toys, and really pulling off the whole aloof thing. Even without magic, he made the best of life and only whined when he had a really good reason, like when his cat bowl was empty or his mom was coming for a visit.

6. Salem Was The Actual Star

Salem knew he was the star of the show, even though his name wasn't in the title, and he loved every minute of it. Every other character was upstaged by Salem at some point, but no one ever upstaged Salem.

He had lofty dreams he refused to let go of, he loved pizza more than life, and, due to unforeseen circumstances, he had to live at home way longer than he planned. Salem was a true '90s kid — er, cat — and would ultimately become the voice of millennials everywhere.

8. Salem Just Had To Show Up To Get A Laugh

Do you remember how hard the rest of the cast had to work to get a laugh? Salem just had to exist on screen, and you were entertained.

Neither diets nor Sabrina and the Aunts could change Salem's undying love for food. He truly was the greatest cat of our time.

I hope this list has reminded you why Salem owned all the other Sabrina the Teenage Witch characters. Now you may resume judging your cat for not being a snarky, pancake eating masterpiece like Salem.