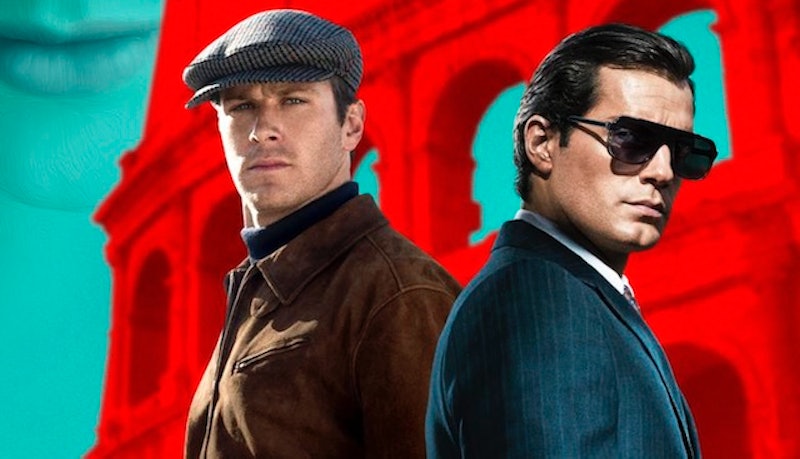 If you loved this summer's thriller The Man From U.N.C.L.E., you're in good company. Plenty of moviegoers couldn't get enough of Henry Cavill and Armie Hammer as secret agents in this sexy spy movie directed by Guy Ritchie. So if you're missing the boys of summer, you might find yourself wanting to watch The Man From U.N.C.L.E. online. The only problem is, your efforts keep turning up search results for the original 1960s TV series. So where can you gain access to the 2015 remake?

As always, there is good news and bad news. The film is available for streaming on Amazon, but at full purchasing price. I know that it sucks to pay $20 for a movie (#firstworldproblems), but since the DVD hasn't even been released yet, it's cool that this option is even available. You can pre-order the DVD, but it won't ship until the official release date of Nov. 17. And since that date hasn't arrived yet, it means that film isn't available for streaming on free platforms like Netflix, either. OnDVDReleases speculates that The Man From UNCLE may be on Netflix by mid-December, but in my opinion this timeline might be a little too optimistic since the film was just released in August. Have no fear, though; there are plenty of other places you can watch Armie Hammer online in the meantime and see the actor in all his glory. Some options are what you'd expect, and some will catch you totally by surprise.

If you're a diehard GG fan, you probably already knew that Hammer had a role in four episodes of Season 2 as a smooth-talking conman named Gabriel Edwards. Luckily for you, these episodes are all available on Netflix. Just try not to fall for the suave character like Serena did (not that you can blame her).

You can see Hammer on HBO Go as Clyde Tolson, the FBI colleague and romantic partner of J. Edgar Hoover (played by Leonardo DiCaprio). It's a fantastic film, but the makeup special effects they used to age the actors are equal parts depressing and creepy.

Trivia time: did you know that Hammer had a bit role in an episode of Arrested Development? Neither did this girl on Twitter, and neither did I! But Armie has yet to call me a cutie for my ignorance about his early career. That's OK — I'll just keep rewatching this one episode on Netflix and wishing that guys in my high school actually looked like that.

You may have never heard of this documentary miniseries, but it had Michael C. Hall as a narrator and featured some other major stars in its reenactments. Hammer was one of these participants, portraying Vietnam vet Gary Benedetti. The miniseries is available for streaming on Netflix.

If you're craving more of Hammer's famous performances, you're not totally out of luck. Many of his films — such as The Lone Ranger, The Social Network, and Mirror, Mirror— can be rented to stream on Amazon for much lower prices than they would be to purchase. Or else you can make it your mission to hold out until The Man From U.N.C.L.E. is released. I'm sure it's possible...