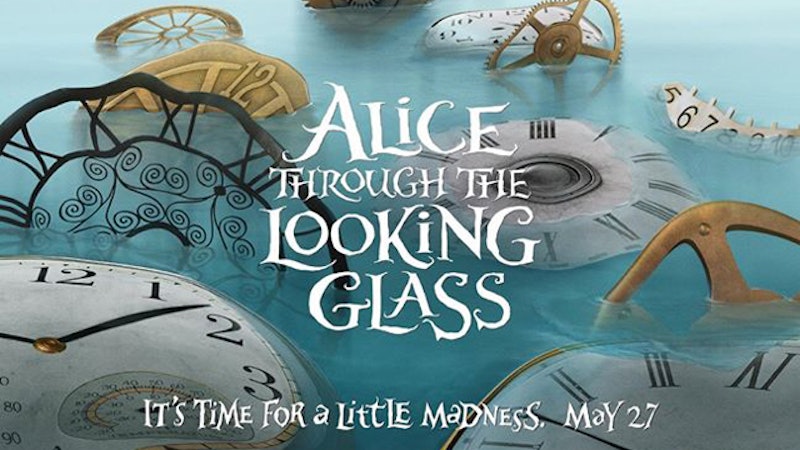 Clever Disney, I see what you did there. With the clocks turning back on Nov. 1, Disney released the first Alice Through the Looking Glass teaser, and it is clear the sequel will be playing with the concept of time. In fact, Sacha Baron Cohen will literally be playing the character of Time. The teaser itself is bare bones, but it does feature Mia Wasikowska's Alice sporting an awesomely whimsical outfit as she opens a door and tumbles through the sky (presumably) back to Wonderland — err, make that Underland (as the home of the White Rabbit, Mad Hatter, and Red Queen was dubbed in the 2010 Alice in Wonderland).

The original movie was a box office hit, but it didn't receive the most favorable reviews. I am cautiously optimistic about the sequel for a number of reasons, though. The teaser itself is heartening. Even though it clocks in at a mere 10 seconds, the glimpse it gives viewers of Alice is a colorful, intriguing one. One thing the original movie did right was play up Alice's strength, curiosity, and thirst for adventure, and given her outfit, Alice's life does not appear to have gotten boring in the time since.

Alice Through the Looking Glass hits theaters on May 27, 2016, and I have a feeling it is going to be the rare sequel that surpasses the original movie. Not feeling my level of excitement yet? Then follow me down the rabbit hole of possibilities that Alice's next journey has for awesomeness.

Alice Is An Adult Now

Alice was heading off to sail the high seas when the first movie ended. I very much want to know who she is now. Her outfit in the teaser is bright and playful in a manner that suggests she could be a performer of some sort. Where she once wanted to run away from the inevitability of a marriage she didn't want to be in, this time around Alice's life might be everything she imagined it to be — which raises the stakes for her return to Underland immensely.

The Mad Hatter Is Getting A Father

Johnny Depp's Mad Hatter was a deeply weird, but still fascinating character. Knowing his father (played by Rhys Ifans) will be introduced has me curious. What kind of backstory are they angling to give the Mad Hatter? It would be a shame to over-explain him, but at the same time Ifans is an amazing actor who I can't wait to see playing off of Depp.

Five years ago, CGI was not quite ready to create the intricate Underworld of Tim Burton's imagination. As a result, the first movie was stuck firmly in uncanny valley territory. CGI movies look amazing now and they rarely ever unintentionally produce nightmares. The short clip in the teaser already looks far better than what was presented to moviegoers back in 2010.

Time Is An Instantly Intriguing Character

I haven't seen Cohen's Time yet, but I love the concept of the character. The passage of time, memories, and a longing for the past all go hand in hand with an adult Alice. To personify the concept is to add a whole new dimension to the way the story will be told.

Even if you hated the first movie, you had to appreciate Fry's wicked take on the Cheshire Cat. Seeing him again will be worth the price of admission.

The biggest mistake the first movie made was not trusting that the audience would be interested in seeing Alice. The marketing material way overemphasized Depp's Mad Hatter, but seeing Wasikowska featured on the poster and appearing solo in the teaser is a relief. Alice was amazing in the first movie and this is her story. Seeing Disney embrace Alice in the marketing makes me believe they have a much better idea of what they are doing this time around.

See? Alice's next adventure already looks and feels far superior to her first.