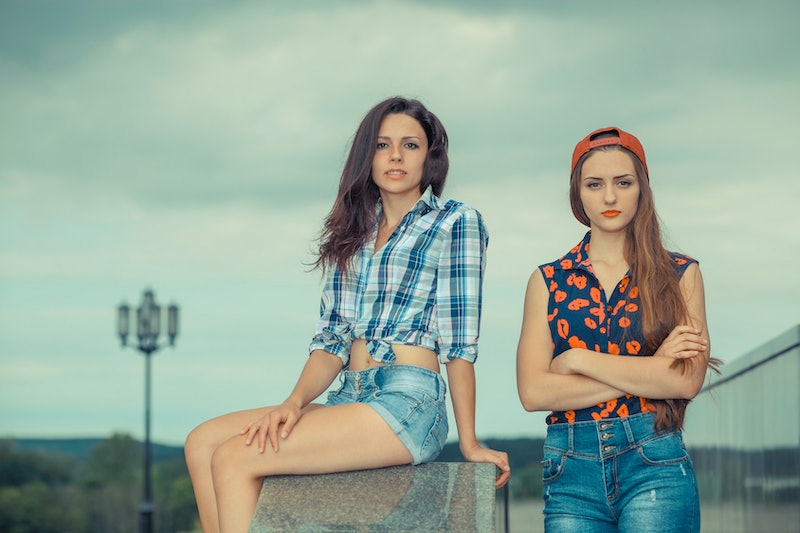 In the latest edition of Bustle’s sex and relationships podcast, I Want It That Way, we talked to Heather Hogan of Autostraddle about lesbian sex and relationships and girl-on-girl culture. For those of you unfamiliar, Autostraddle is a website dedicated to queer women, who are radically feminist, and want to talk about all facets of the queer experience. While a majority of the site’s users are queer, according to Hogan, there’s a good amount of straight women who also visit the site. Because Autostraddle takes pride in being a safe space for community discussions, women of all orientations flock to the site in order to openly discuss women’s issues—especially those centered around sex—without it having to be all about the male’s experience.

Here are six things you should know about lesbian sex and relationships.

According to Autostraddle’s Ultimate Lesbian Sex Survey from earlier this year, 77.8 percent of queer women orgasm most or every time they have sex with a partner, while only 57 percent of straight women can say the same.

Only 32.6 percent of those surveyed said they've experienced quirting, while almost 50 percent said they haven’t. But for those women who have squirted, 85.2 percent say they have orgasms most or every time they engage in partner sex.

3. Monogamy May Lead To Better Sex

According to Autostraddle, those in monogamous relationships feel much more confident in bed, they aren’t afraid to communicate about sex, and they’re willing to try new things.

5. A Little Over 50 Percent Of Lesbian Women Say Fighting Can Be Productive

In Autostraddle’s Lesbian Fight Club survey released this year, 3,500 participants answered questions about fights in their relationships. As it was found, 27 percent of them say they fight with their partners a few times a month. But nearly 60 percent try to avoid going to bed angry.

6. Women In Same-Sex Relationships Are Most Likely To Fight About Relationship Expectations

About 60 percent of those surveyed said relationship expectations are the number one thing they fight about, followed by pet peeves or annoying habits (55.6 percent), and then sex (41.7 percent). When it comes to make-up sex after an argument, only 38 percent say they do it “always,” while 55 percent say they do it “sometimes.”

Want more of Bustle's Sex and Relationships podcast? Watch people try to guess what these sex toys are used for:

More like this
TikTok's "Triangle Method" Technique Is The Key To Better Flirting
By Carolyn Steber
12 Aphrodisiac Desserts To Spice Up Your Valentine’s Day
By Kaitlyn Wylde
12 Anti-Valentine’s Day Memes For People Who Are So Over Romance
By Meghan Bassett
30 Sweet Valentine's Day Caption Ideas For Long-Distance Relationships
By Syeda Khaula Saad and Carolyn Steber
Get Even More From Bustle — Sign Up For The Newsletter
From hair trends to relationship advice, our daily newsletter has everything you need to sound like a person who’s on TikTok, even if you aren’t.