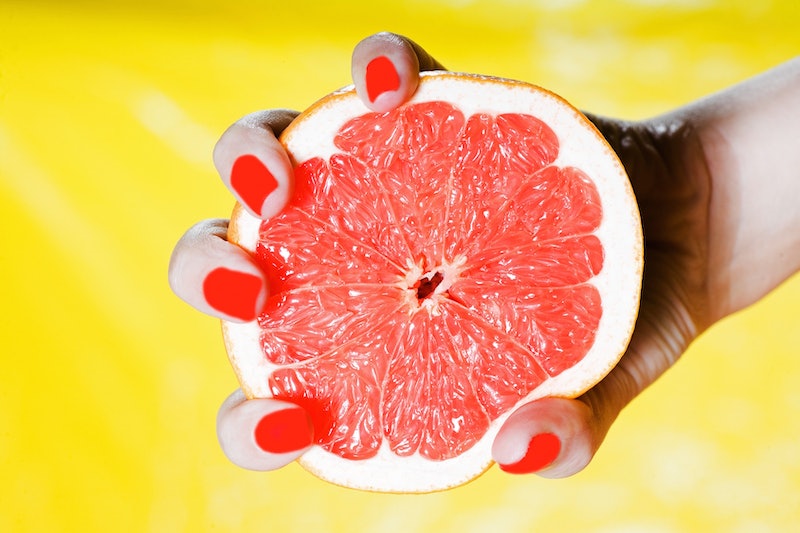 For millennia, humans have been fascinated by the mysteries of female ejaculation — where does that gushy stuff come from? What makes it burst forth? And what are its demands in our earthly realm? — and over the past few weeks, the Internet has been flooded (sorry) with discussion and data that may answer some of those questions. A team of French researchers recently conducted a small but high-profile study about squirting, which concluded that most of the liquid that comes out when females ejaculate originates in the bladder, and is composed primarily of urine. This, of course, has led to debate, both from other scientists who think the research was shoddy, and sexuality activists and female ejaculators themselves, who say this is all just another excuse to tell women that their own experience of their sexuality is wrong.

But that's just par for the course — because when it comes to our gushing vaginas, there's a long history of confusion, misinformation, and totally biased media coverage. Take, for example, the fact that either 10 percent or 69 percent of women can ejaculate, depending on which study you're reading, which is an absolutely insane variable. Add to that the fact that reportage on this new study is full of weird, frustrating turns of phrase like "[female] ejaculation remains an enigma" and "Whilst male ejaculation is simply a fact of life, female ejaculation ... has remained a bit of a mystery." What is the mystery, exactly? Does it feel that damned mysterious to the women who are doing it? Is the real mystery the fact that we can't accept that some women's bodies operate one way, and others operate another? It seems to me that this is a "mystery" that needs to be solved.

How Does Female Ejaculation Work, And How Does One Achieve It?

One thing that scientists and sex bloggers alike can agree on is that female ejaculation is usually the result of prolonged G-spot stimulation — the spot which, you'll remember, was recently revealed to be part of the internal structure of the clitoris. The other point they can agree upon is that sometimes female ejaculators, during orgasm, expel a liquid from the urethra. But here's where the conflict arises: some folks believe that liquid is created by the Skene's glands, which are located right by the female urethra and made from tissue similar to male prostate glands. Others, like those killjoy French scientists, think that when a woman ejaculates, she is involuntarily urinating. Potato, poh-tah-to, right?

I don't really care much if female ejaculate is or isn't made of pee — I've had period sex on a "wheat"-colored IKEA couch, so come at me, bro — but I did wonder why everyone, from women's sexuality activists to the grossest of pick-up artists, seemed so obsessed with achieving ejaculation. Was it really so amazing? Or did many of the ejaculate obsessives I found online simply view it as a cool party trick? An argument for the latter is present in the vast body of literature aimed at men who want to help their female partners ejaculate, none of which have sensitive titles like "How to Make a Woman You Like Feel Really Amazing." Instead, try "5 Fabulous Tips to Make Any Woman Squirt Easily" or "Make Her Ejaculate," which includes the line "To take it up a notch, use your other hand to press down on the area between her naval and her pubic mound," a move that any woman will recognize from the part of your annual gynecological exam where they're checking your uterus for polyps.

I try not to take sex or life advice from anything called "The Stallion Style," but the idea that a certain set of tips would work for ANY woman seemed absurd. Vaginas are wild cards! You can't generalize about them like that! Anything can happen when they're around! And my vagina is, perhaps, the wildest card around. Could these tips work for me?

Could Even An Uptight Control Freak Like Me Master Female Ejaculation?

I had never really given female ejaculation too much thought in the past — I had one isolated incident in college where a ton of liquid came pouring out of my vagina during a totally unremarkable sexual encounter, and then it never happened ever again — but the tone of the recent female ejaculation coverage raised my feminist hackles. As did the fact that female ejaculation has been banned in British pornography, under the rationale that it... might be too fun? (the same list also banned spanking and referred to facesitting as "life endangering," so I guess think twice before planning your honeymoon there).

And since raising my feminist hackles is the only way I can ever get myself to do anything (including take out the garbage and file my taxes) and because I am, if nothing else, an extremely dedicated vajournalist, I decided that now was the time to find out if I could squirt.

The truth is, that for someone who writes about sex often and masturbates pretty much every minute I'm not in public, I don't have a ton of interaction with my vagina. My own sexual world revolves around my clitoris, and I've had odd problems with my mystic cavern over the past few years that have, honestly, alienated me from it a little bit. Times when it mysteriously runs dry, times when all sexual contact seems to irritate it, times when it has been plagued by weird pains that gynos have told me were all in my head. My vagina feels weird more often than it feels good. I think of my clitoris as my well-behaved child, and my vagina as my unruly teen who ran away to sell hair wraps in the parking lot of String Cheese Incident concerts. In my mind, my vagina is mostly around so that my boyfriend has something to do while I touch my clit. It's like the fine china that I only use when guests come over. Which would probably explain why my initial excursions into trying to make myself squirt on my own went so poorly.

Attempt #2: Going To Babeland For Backup

Undeterred, I headed out to the wise vagina whisperers who work at sexuality emporium Babeland, to help me figure out how to do this. "Do you have anything," I said, "that I can put in myself that will make me squirt?"

There's nothing, it turns out, that can make you squirt; there are just ways to move things along in the event that you happen to be squirting-capable. "It helps to be really relaxed," the vagestress/saleswoman told me. Since "really relaxed" is a state that I experience about twice a year (generally after I have taken a Xanax to fall asleep on an airplane), I was immediately on the defensive. Isn't there a way we can work around this whole "relaxed" thing? Like, maybe with some heavy-grade sexual artillery?

The saleswoman took me to the back of the store, where they keep the good stuff. She presented me with a large curved metal barbell, one I had read about on the Internet — it is called the Njoy Pure Wand, and all the reviews I read had been raves. "Is it good?" I asked. "I want to be buried with mine," said the saleswoman. And with that, I plunked down a truly absurd sum of money for something that exclusively goes into my lady lounge.

Attempt #3: Bringing In The Boyfriend

I am a feminist who believes in bodily empowerment, Diva Cups, and the ongoing cultural relevance of the Indigo Girls, so I am ashamed of what I did next: I turned to my boyfriend, my original Vagina Whisperer. Prior to our perfect union, my beau had been with women who preferred vaginal stimulation to clitoral, and professed some expertise in this area. So, brandishing my wand, I finally took him up on years of offers to poke around in my Dusty Springfield and see what was going on in there.

The sexy stuff started promisingly enough, but when penetrating my Lady Marmalade became part of the equation, things seemed to take a turn for the ridiculous very quickly. I admit that this was mostly my fault. "Where is my G-spot? Is it here?" I demanded, grabbing my boyfriend's finger and poking it at at one part of my vagina that felt a little bumpy. "No, it's here," he said, pushing his finger up into some crevice I had never noticed before, which made me feel like I had to pee terribly. "Wait, where is that, show me!" I started yelling, pushing his fingers out of the way, shoving my finger in and poking randomly at everything inside me, including his finger. The whole event begins to take on a "Three Stooges-accidentally-headbutting-each-other" kind of vibe.

But eventually, I calmed down enough to give female ejaculating another shot. I went through my beloved clitoral foreplay, and then start poking around inside my vagina with the wand. Sometimes it felt interesting, sometimes it didn't, but it definitely only felt like an add-on: I knew I would not orgasm from it alone. I buzzed myself to orgasm on my clit while working this rod feverishly inside me, like a video game joystick, and it felt kind of exciting, at parts. But afterwards, when I saw that nothing had come out, I felt disappointed.

Several nights later, I demanded that we try it again. This time, I somehow accidentally poked myself in the bladder. I ended our encounter abruptly, sulking. I was definitely not a squirter. Not only was I not a squirter, but I HATED my vagina. Why did she always have to be so weird? Why couldn't she just be normal? Why couldn't she give me this one thing? In this moment, I felt like I was the sulky teen and my vagina was my mom, showing up uninvited to ruin any party I might manage to get going.

"I hate my vagina," I told my boyfriend.

A Happy Ending After All (No, Not That Kind)

So does this story have a happy ending? Maybe. Maybe my vagina and I needed to have that heated confrontation, like angry ex-lovers appearing together on a daytime talk show, to finally confront our problems together. I still don't totally trust her — to consistently give me pleasure, to not randomly hurt — but there was something about my inability to squirt that, after I thought about it, made me feel closer to her. We're both underachievers. We both have a hard time taking direction. We have more in common than I thought. And maybe we have it in us to patch things up eventually. Hey, she's frustrating, but she's family, and isn't that what it's all really about?

More like this
12 Aphrodisiac Desserts To Spice Up Your Valentine’s Day
By Kaitlyn Wylde
25 Inspiring Quotes From Black Women To Celebrate Black History Month
By Kyli Rodriguez-Cayro and JR Thorpe
18 Hinge Prompt Answers To Try If You’re Looking For Something Casual
By Lexi Inks
The 8 Best Crystals For Meditation, According To A Healing Energy Practitioner & Meditation Teacher
By Lauren Moison
Get Even More From Bustle — Sign Up For The Newsletter
From hair trends to relationship advice, our daily newsletter has everything you need to sound like a person who’s on TikTok, even if you aren’t.