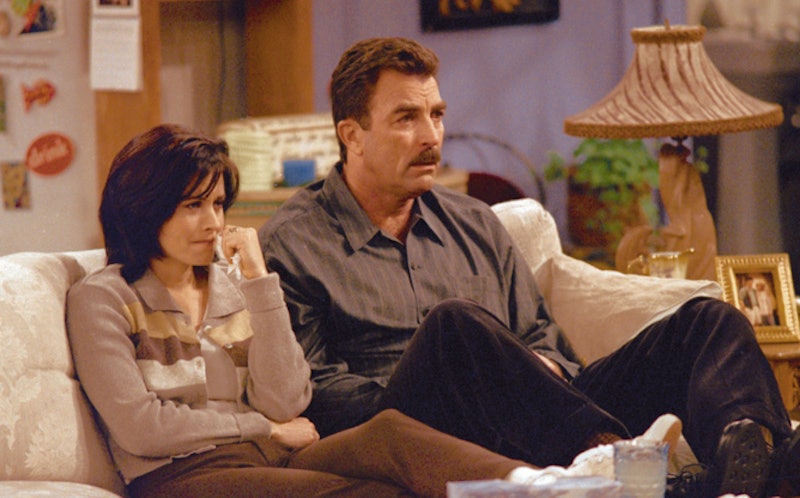 In my book, no love will ever be as real as '90s TV love (at least not for fictional people). It was so easy to offer your total investment in Ross and Rachel, Cory and Topanga, and Zack and Kelly because they were meant to be. Their love was decreed by the TV gods and there was no higher power than them, but for every preordained match made in TV heaven, there was an underrated '90s TV couple out there who just never got the love they deserved. Maybe they weren't written in the stars like The X-Files favorites Mulder and Scully, or maybe their relationship burned bright and fast. For whatever reason, the '90s had more than its share of couples who never got the love they deserved.

Most of the couples on this list were not endgame. They had messy breakups, they realized they weren't going to be forever, or they just drifted apart. While they were together, though, they were magical. Watching them was absorbing, frustrating, and wonderful all at once. Maybe they didn't have the kind of epic love that would secure their place among TV's greatest couples, but when they were together these '90s couples made my heart swoon and break just as much as Ross and Rachel ever did.

Ellen was a girl and she was Big Pete's friend, but it was a rare occasion when these two almost teenage sweethearts actually let themselves get romantic. It was better that way though. Ellen with all her inherit quirkiness complemented Pete's grounded nature perfectly, and if romance had ended their friendship hearts everywhere would have shattered. These two are the most perfect almost couple ever.

It's not easy to compete with the love between a vampire and a slayer, but the hilarious and heartbreaking romance of humans Xander Harris and Cordelia Chase was refreshingly honest compared to Angel and Buffy's epic tale. They fought, they kissed, and they fought some more. It was clear they would never last, but their chemistry was undeniable.

Monica and Richard might be the great unsung love story of Friends. Despite their age difference, Monica and Richard complimented each other beautifully and every moment of their relationship from her awkwardly comforting him over his divorce to their devastating dance floor breakup was wrought with emotion.

Before Joey and Pacey, there was Andie and Pacey and it was amazing. She pushed Pacey to be the best version of himself and Pacey supported Andie as she tried to cope with her mental illness and the loss of her brother. These two kids could banter with the best of them and no matter how much tragedy got in their way, they always managed to maintain a mutual love and respect for one another.

I will be the first one to admit Nick wrote a horrible love song and smoked way too much pot, but for a brief moment in time he and Lindsay were the most adorably awkward couple on the planet. I know the show wanted me to want Lindsay and Daniel to happen, but my heart always belonged to Lindsay and Nick.

Mark and Elizabeth's romance was full of rough patches (his angry teenage daughter certainly didn't bring them closer), but it was also full of mutual respect. They anchored each other, they shared a child, and when Mark died, Elizabeth was by his side.

Within the Charmed fandom, Phoebe and Cole are beloved, but the rest of the world is missing out. Cole was a demon and Phoebe was a good witch — they never stood a chance, but that didn't stop them from trying to defy the cosmic odds stacked against them.

Darlene was as sharp-tongued and disaffected as her mother, but the sweet and shy David turned out to be the one guy who could make Darlene care. I have never forgiven Roseanne for rewriting history in its final episode because I cannot imagine a more perfect match than these two grunge cuties.

It took Sean and Tamira an inordinate amount of time to get together considering they went to high school on a boat, but when the nerdy Sean (yes, baby Ryan Gosling played a nerd) and the gentlehearted Tamira finally confessed their feelings for each other, pre-teens everywhere fell in love. Sadly, they later forgot this show existed, but that should not diminish Sean and Tamira's place in TV history.

I'm a sucker for unrequited romances. Daria put so much effort into not caring about things it made her affection for Trent feel essential somehow. They never truly got together, but they had more unresolved romantic tension than any two animated characters should have the right to generate.

Ah, the '90s. Even the relationships you probably forgot about can still sucker punch you in the heart when you least expect it.