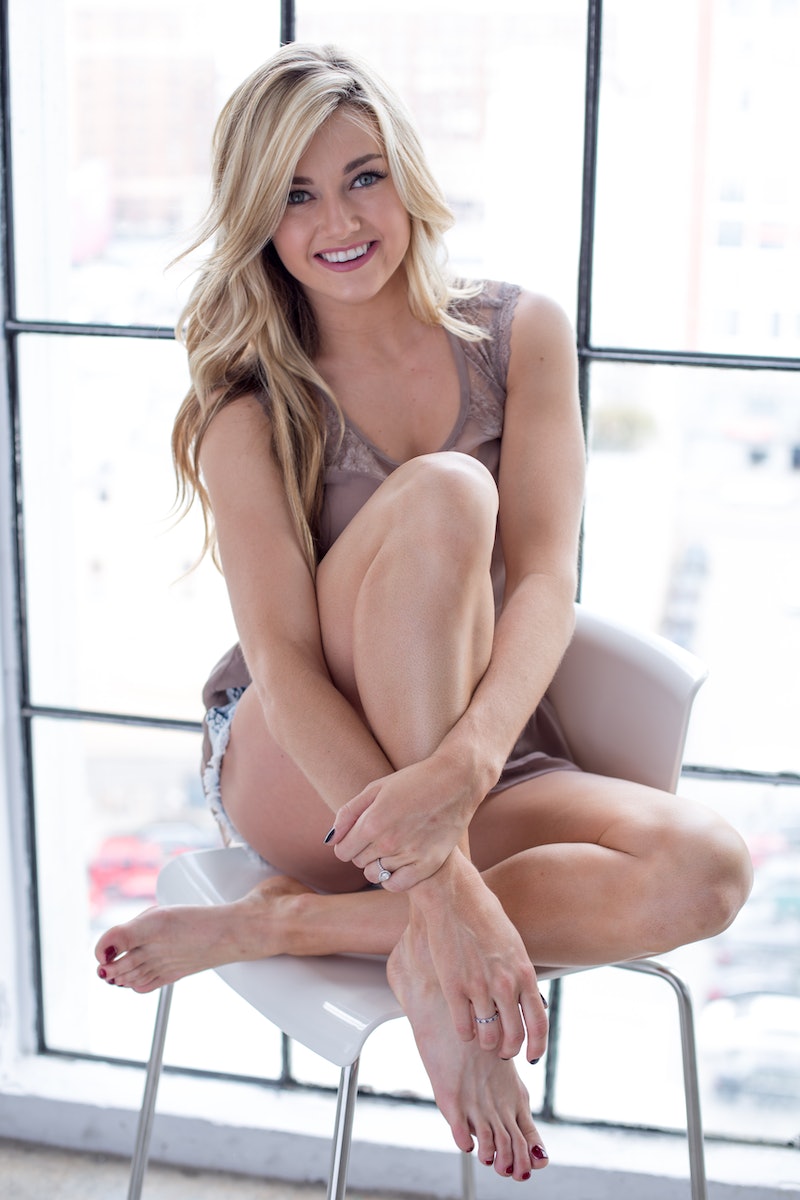 In 21 seasons of Dancing With The Stars, fans have watched a plethora of celebrities samba, cha-cha-cha, and paso doble in competition for the coveted Mirror Ball trophy. But, how much do we really know about the show’s dance pros — the ones who prop up and mold the celebrity dancers until they are well-trained, expert two-steppers? Well, we’re about to find out more about one — Alek Skarlatos' partner and DWTS pro Lindsay Arnold spilled to Bustle about her favorite music to dance to, her new husband, and her time on So You Think You Can Dance versus Dancing With The Stars.

Suffice it to say that Season 21 has been a little hectic for Arnold. “I found out I was going to be a professional super late in the game — the night before the Good Morning America announcement,” Arnold says. “Ever since then, it’s just been kind of a whirlwind. It’s been insane, but it’s been so incredibly fun. I’ve had so many opportunities to show what I can do, and it’s just been a really good time.”

And by showing what she can do, Arnold isn’t just talking about her dancing ability. A gifted choreographer, Arnold’s moves are the ones that make her partner look good from week to week.

From waltz to tango, Arnold is the guiding hand behind every move Skarlatos makes. That’s no easy feat! She takes on the process with a smile, but even she has her preferences. When asked about her least favorite dance to choreograph, Lindsay was ready with an answer, saying, “I would say the hardest is a samba. It’s not hard to choreograph, but it’s the hardest dance to teach, because there’s so much rhythm in your body that is needed to make it work well. That’s the hardest one to teach someone like Alek who doesn’t have a lot of dance experience.”

Skarlatos and Arnold have yet to perform a samba together on Season 21, but I have faith that she will shape him into exactly what he needs to be, especially if she has the right music. “I love The Weeknd,” the dancer tells Bustle. “I would love to choreograph to him at some point.” Wouldn’t The Weeknd be perfect for a samba? But, if she can't get that, she has another favorite. “A more recent song that I’m obsessed with is Adele’s new song, ‘Hello.’ It’s so good!" she says. "I already tried to get it cleared for this season, but it’s too new. I’m hoping for next season. It’s perfect.”

And, the 21-year-old may be one of the newer pros on Dancing With The Stars, but she’s definitely not new to the television dance scene. A former contestant on So You Think You Can Dance, Arnold is used to the intense scrutiny of these kinds of shows. “When I was on SYTYCD, the pressure was all on me," she remembers. "If the judges didn’t like the dance, it was because they didn’t like the way I performed the dance. On Dancing With The Stars, it’s much more about the celebrity.”

While that may sound a little easier to deal with, she adds, “That puts a lot more pressure on me because I can’t control what Alek is going to do on the dance floor. I can just hope that everything turns out right. So it puts a lot of pressure on the teacher to make sure that [their student] feels confident in everything they’re doing.” Seems to me like neither show is a walk (or dance) in the park. But, she's been excelling this season despite the added pressure.

With hours and hours of Dancing With The Stars rehearsals each week, it’s fair that the newlywed (she married longtime boyfriend Samuel Lightner Cusick in June of 2015) would bring some of that dancing work home with her. Is her husband a good dancer? “He dabbles, you know,” she says, laughing. “I’ll come home sometimes and teach him a little of what I’m teaching Alek just because I want to see how he would able to do it. If we were ever to compete on Dancing With The Stars together it would probably cause problems in the home!”

With only a few weeks left of competition, Arnold is throwing herself into teaching her partner everything he needs to know to win Dancing With The Stars. Will they emerge victorious? Only time will tell, but for now, she seems happy to be along for the ride.