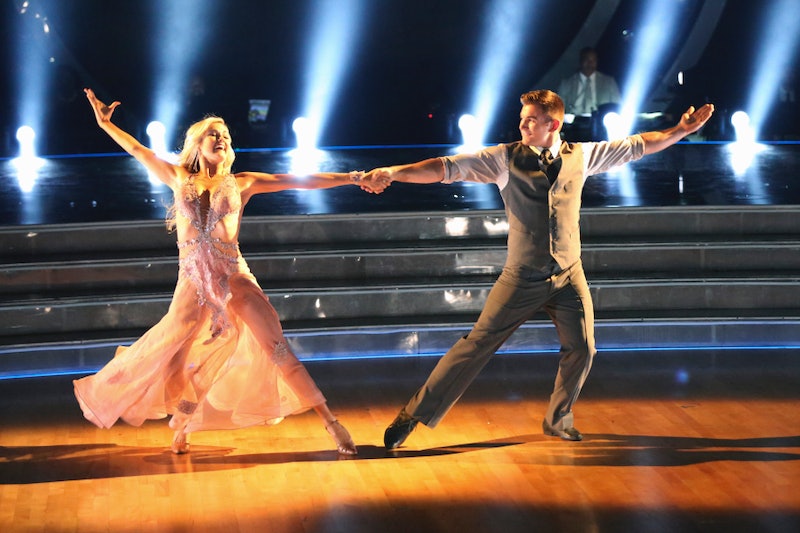 The relationship between Dancing With The Stars celebrity and Dancing With The Stars pro is an important one. If these two personalities don't jive (pun intended), the pair could be out of the competition faster than Bruno Tonioli can scream some weird double entendre and make everyone slightly uncomfortable. Luckily for DWTS pair Alek Skarlatos and Lindsay Arnold, they get along swimmingly.

In an interview with Bustle, Arnold says, “Alek’s transformation has been so incredible. I remember during the Good Morning America announcement in New York that he was like a deer in headlights, no idea what was going on… Now, it’s almost two months later, and he’s totally transformed. Watching him take this opportunity and make it his own and grasp it has been awesome for me.”

According to Arnold, she and Skarlatos were among the last couples chosen for the show, so they both had to jump right into the competition. Sometimes, it’s easier to just do rather than think about it. She agrees, noting, “I was just thinking about how we’re going into Week 8 in the competition, and I guess it just kind of flies by because you don’t even realize how far you’ve gone until you’re already there!”

From where I stand as a viewer, the whirlwind start hasn’t hindered this dancing duo at all. Week after week, the pair look confident and collected, hitting (mostly) every step with ease. Arnold has molded Skarlatos like clay, working him into one of the best dancers in the competition. During the partner switch week, though, she danced with Carlos PenaVega, and when pressed as to who is the better dancer, Arnold just can’t decide. “Ooh, this is tough! I mean, Carlos and Alek are completely different people!” she says. “They learn extremely differently. Carlos definitely picks up the moves more quickly than Alek — I think it comes a bit more naturally to him. That being said, it may take Alek a bit longer to get the steps, but when he does, he really performs them well.”

Dancing aside, there’s one topic that Skarlatos’ Dancing With The Stars fans really want to know about — his love life. Alek Skarlatos is notably single, and the show has poked lighthearted fun at his singledom and his crush on pro dancer Emma Slater. All of Dancing With The Stars fandom is rooting for Skarlatos settle down, but, according to Arnold, it will not be with Emma. Arnold says, “Alek and Emma had a little bit of chemistry when they were partners, but unfortunately for Alek, Emma is not available, and that really bummed him out because he had some feelings for her!”

My poor dancing prince! Though his journey to love may have been temporarily stunted, Arnold assures that she is doing her best to help him find love. “There are so many beautiful girls on Dancing With The Stars that are available,” The pro points out, “So we’re really pushing for Alek to make something happen! He’s actually pretty shy. He’s not used to having this many beautiful women around him.” What a problem to have, right?

But, back to the dancing. The pair have their sights set on that lust-worthy Mirror Ball trophy, and the competition will only get tighter from here on out. Who does Arnold see as her biggest competition on Dancing With The Stars? It’s just who you’d expect — Bindi Irwin. “Bindi is the obvious contender of the competition. She not only performs well every single week, but she’s been at the top of the leaderboard for weeks now,” Arnold says. And, it’s not only Bindi’s dancing skills that mark her as a leader. “She’s just such an amazing person, and I think that is going to help her in the competition because America loves her,” the dancer continues. “It’s so refreshing to see a young person who is so kind and who has such a good heart.”

So, will Arnold and Skarlatos trump Irwin and win this season of Dancing With The Stars? Only time (and judges and votes) will tell that, but I’m confident that they will remain close friends for years to come. And, maybe Arnold can finally get him a girlfriend!