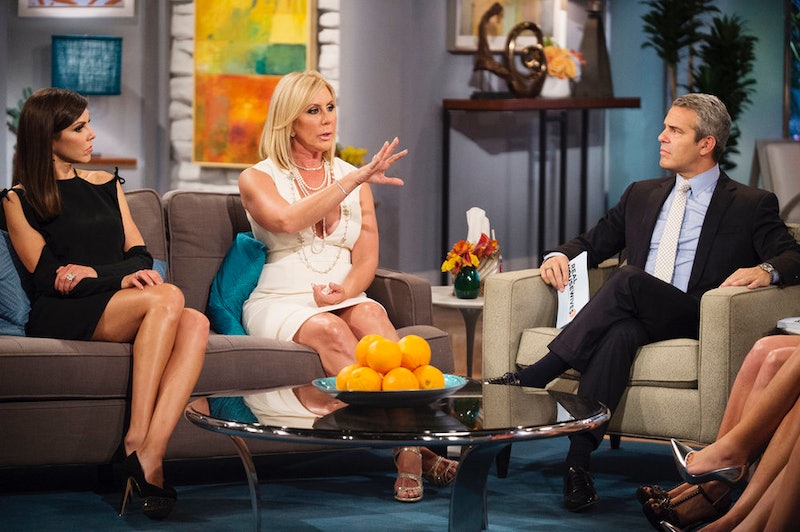 During the season finale, the time came on Real Housewives of Orange County for Brooks' health to be put under a microscope. Again. Throughout the season, it's been the topic of conversation, and Bravo waited until the third part of the reunion to get to the bottom of the mystery. Does Brooks have cancer, or doesn't he? The reunion didn't give us much of an answer, but there has been some new revelations in the case that will probably satisfy some fans.

On Sunday's final part of the Season 10 reunion, Andy Cohen wasted no time getting into the subject. For a while, the women went back-and-forth detailing what they know about the situation. Nothing new came up, until Shannon showed her own CAT scan from the same clinic that Brooks attended. Comparing the documents, Shannon said she believes that Brooks' documentation wasn't real, or at least wasn't from where he said it was. The header, the errors throughout, and even the width of the text were all different, she said.

In regards to his hints that Vicki was lying, Vicki said that she did "fabricate" some details of Brooks' health because she wanted compassion from the other women. She was hurt that she didn't get the "casseroles" and the calls that she was hoping for, which might explain why she never seemed to be in too much of a position to get down to the truth of the situation.

Vicki went on record of saying that as of the reunion, she doesn't know if Brooks does or doesn't have cancer, but "her gut" says that he doesn't have it.

Whether or not she's right, I feel for her, as she seems to have been really put on trial during this season, and I think it's a good thing that she's admitting to "fabricating" stories to garner sympathy. Hopefully, she continues this parade of truth and sticks to her guns by remaining the strong woman she has proven to be in the past 10 seasons.