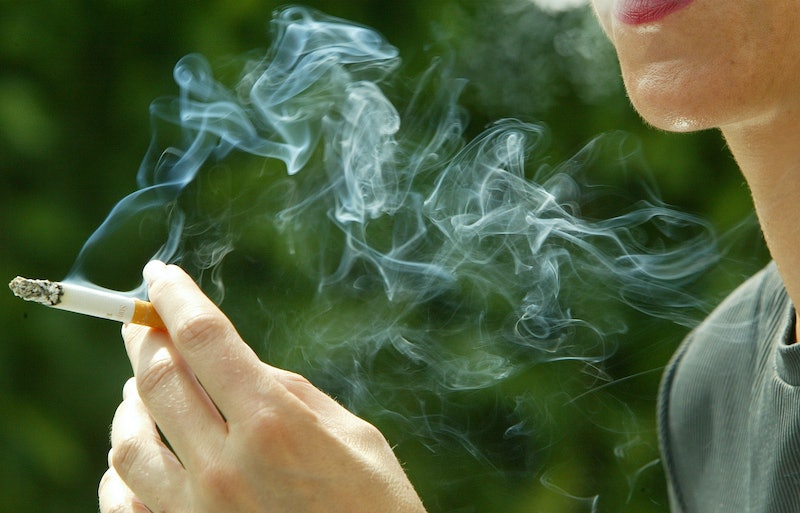 The numbers are in, and they are promising: Anti-smoking efforts have saved roughly 8 million American lives since 1964, the Journal of the American Medical Association (JAMA) estimates. For the past 50 years, since the surgeon general issued a warning on the dangers of smoking, the number of smokers has decreased from 42 percent to just 18 percent. Forty-year-olds now enjoy a five-year increase in life expectancy over their 1964 counterparts, with tobacco control responsible for 30 percent of that increase, according to JAMA.

However, as Bustle previously reported, 18 million Americans have still died from smoking and tobacco-related activities since that seminal 1964 surgeon general's warning. And even though smoking seems to be on the decline in the U.S., other countries around the world still use cigarettes as part of their daily routine.

Smoking declined an average 25 per cent among men in 187 countries from 1980-2012, and by 42 percent among women. Because of population growth, the number of smokers worldwide has increased and rates remain high in many countries. More than half of men smoke in Russia, Indonesia and Armenia, and more than 1 in 4 women smoke in Chile, France, and Greece.

The explosion of e-cigarettes on the market is seen by some as a way to curb smoking. But federal data shows that middle- and high-school students are smoking twice as many e-cigarettes, which doesn't sound terribly promising. And the European Union actually relaxed restriction on e-cigarette sales.

It is safe to say that we'll never see ads like these touting the cigarettes that "doctors trust," with "less irritation," that "relieve fatigue."

But we have seen our fair share of bizarre and effective anti-smoking pushes in our lifetime. Let's remember some of the more traumatizing ones.

The U.S. Food and Drug Administration was all for placing new labels on cigarette packs, which would cover nearly half of the box and 20 percent of other cigarette advertisements. When tobacco companies protested, a federal judge ruled in their favor in March 2012, and the Justice Department decided not to take up the case.

The illustrations were quite graphic, and a stark difference from the normal cigarette packaging that has been around for 25 years. According to CNN:

The proposed images include a man exhaling smoke through a hole in his throat; diseased lungs next to healthy lungs; a mouth bearing what appear to be cancerous lesions; a bare-chested male cadaver with chest staples down his torso.

Grossest (and most effective) Anti-Smoking PSA Ever?

Is this anti-smoking commercial seared into your brain? Well, I hope you haven't eaten lunch yet. In 1996, Debi Austin told viewers, "They say nicotine isn't addictive" before lighting a cigarette in the hole in her throat. Austin died of cancer in 2013.

It's hard to shock the French. But this anti-smoking ad did the trick. In a series of print ads, a young teen is seen with his/her mouth — holding a cigarette — precariously close to an older man's crotch. The tagline reads "Smoking means being a slave to tobacco." Some viewers were outraged, saying that the ads trivialized sexual abuse. Since we can't embed the photos, check them out here and judge for yourself.

The Truth Campaign gained major traction through large-scale advertising campaigns in the 2000s, presenting itself as a grassroots organization targeting Big Tobacco, although its actual funding is a bit shadier (hint: its funding is tied back to tobacco companies). Their current commercials focus on cigarettes containing the same elements of dog poop and cat pee, and it's quite disgusting. But perhaps Truth's most memorable commercial involved 1,200 people "dropping dead" in front of a major tobacco company, symbolizing the number of people that really die per day from tobacco products.

The U.S. Department of Health & Human Services launched a campaign in the late 1980s that followed the adventures of Nic (A Teen). Get it? Kinda goofy, but it worked. Nic can be seen getting picked on for being a smelly outcast who can't get a date. As the video says, "Don't Be A Butthead." Any excuse to use the word "butthead" again is OK by me.