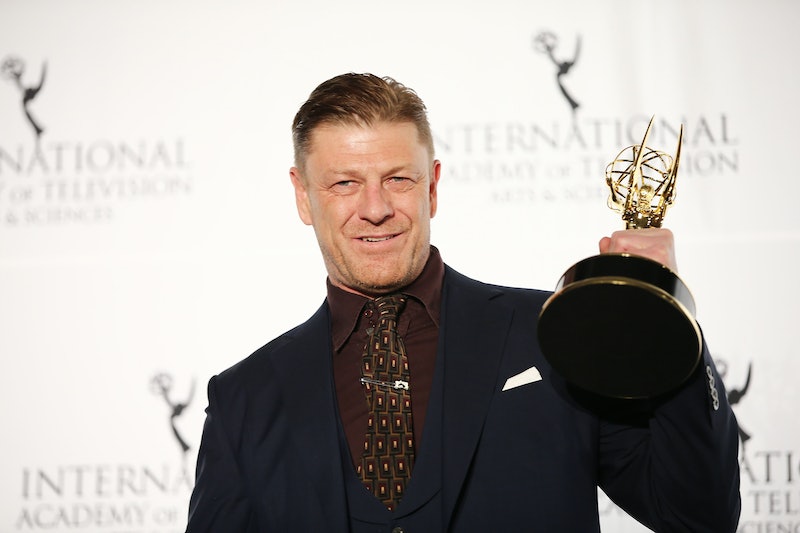 More opinions from the Game Of Thrones cast on the fate of Jon Snow: Sean Bean, aka Ned Stark, aka Jon Snow's dad (maybe), thinks that Jon Snow is gone for good — but, as a fan, I have to ask: Does he know anything? During an interview promoting his new show, The Frankenstein Chronicles, the 56-year old actor said he thinks there's no way Jon Snow could have survived: "It kind of didn’t look like it, I have to admit, but who knows? Anything could happen." That's not super helpful, Bean.

But Bean isn't the only one that knows nothing; a lot of the Game Of Thrones cast has offered up their own theories about whether or not Jon Snow survived the stabbing on the Wall. And basically, no one knows anything about anything! I guess there's just a gut feeling that separate those that believe Jon can't come back from the dead and those that still maintain hope. Because obviously A Song Of Ice And Fire author George R. R. Martin isn't dropping any details, and the producers and directors are keeping mum, too. (Besides the ones that are telling us there's no hope, like David Nutter, who says, harshly, "dead is dead.")

Even though I'm an eternal pessimist when it comes to most things, I just can't accept that Jon Snow is dead: why else would a man who looks a lot like Kit Harington be lurking around the Game Of Thrones set? He can't possibly just be there for emotional support for the rest of the cast. Let's see what the cast thinks:

Even though Bean hasn't been on Game Of Thrones since Season 1 when his character Ned was beheaded, obviously there's still interest in what he thinks about Jon Snow. After all, he played Snow's on-screen dad! (Unless you believe certain theories.) In his interview with The Express talking about The Frankenstein Chronicles, Bean said that this speculation surrounding Snow is nothing new: "I guess that’s the big question. It used to be: Who’s Jon Snow’s dad? Now it’s: Is Jon Snow really dead? But I think he probably is, what do I know?"

I don't know, Bean, what do you know?! Obviously the actor formerly known as Ned Stark has to know something. Does he know the real secret behind Jon Snow's parentage? Does R + L = J? I think his feigning innocence is a diversion tactic and he actually knows a lot more than he is letting on.

Arya Stark is convinced and heartbroken, of course, that her half-brother Jon Snow is definitely never to return from the dead . Why so negative, Maisie?! Williams was actually one of the first actors from the show that insisted that Jon Snow was dead after the fifth season wrapped with that chilling scene, and as of October, she's not budging. She said in an interview with Absolute Radio in early October: “All the time people are asking me if Jon Snow is alive and the answer is no! He’s dead! I promise," she said. Well, I love you Maisie, but can you at least let us hope?

Apparently, she can't. Shortly after the tragic finale episode "Mother's Mercy" aired in June, Williams had no sympathy for sad fans, according to People NOW: "We saw him get stabbed a lot in the chest, I think that’s pretty clear…. Well if it makes you feel better… ‘Yes there’s hope!’… no, there’s no hope." Oh.... OK.

Samwell Tarly, Jon Snow's best (maybe only) friend in the whole world of Westeros, doesn't hold out any false hope that Jon Snow lives. That's pretty bleak. In an interview with People's Choice, actor John Bradley talked about how emotional it was to say goodbye to the Lord Commander: "It was sad for me even though I knew what was coming. In fact, it was kind of more sad because everything leading up to it has an extra degree of poignancy if you know what’s going to happen... Jon and Sam’s last scene together and Kit and my last scene together had a certain texture to it, which [our scenes have] never had in their goodbyes before — it felt final." OK, it FELT final... but feelings are just feelings, Bradley!

OK, so Khaleesi is split. In fact, she's split 50/50 on whether or not Jon Snow is dead. Discussing the fate of Snow, Clarke told MTV what she thought Snow's chances of life are: “If I had to bet, I’d say there’s like a 50/50 chance. There’s some very helpful people there who could bring him on back to life." Unfortunately, that comment is NOT super helpful.

There are other cast members who hold out hope for Snow, like Carice Van Houten, who plays the Red Woman, Melisandre. At London Comic-Con in July, the actress said: "He can't be dead! No!" and that kind of denial really resonates with me. So even though all of these cast members are insisting that Jon Snow has left the building, I'm here to say: y'all know nothing. At least that much Sean Bean got right.

But unfortunately, we just have to wait until April to find out, or until more telling photos leak from the set of Game Of Thrones that show Harington is definitely filming — whichever comes first. Winter is coming... but Game Of Thrones isn't even coming back until spring. That's the true terror.