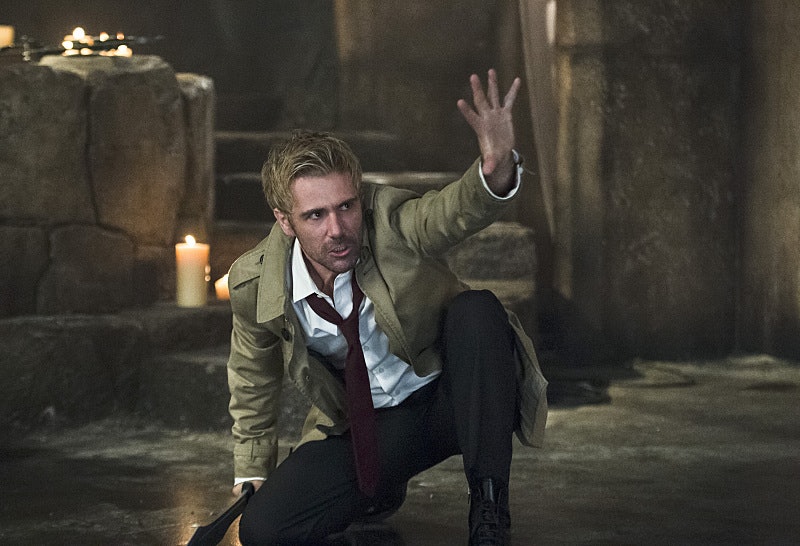 One of the great things about television is that even when a show is canceled, that doesn't mean you won't eventually see one of its characters pop up somewhere through a different medium. And that's exactly what Wednesday night's Arrow episode "Haunted" is looking to do with NBC's short-lived series Constantine. Though the show itself has come to an end, Matt Ryan, who played Constantine, will reprise his titular role on Arrow and team up with our Star City gang for a very important mission. But before we dive into all of those details, it's important for everyone to understand who exactly is John Constantine and how he will fit into the storyline.

Think of this guy as a sort of jack of all trades when it comes to chasing big bads. Specifically, he is most well known for his demon hunting capabilities and knowledge of the occult, however, his talents go even deeper than that. Constantine is also known to be quite the magician and possesses a vast understanding of spells and curses — which is precisely why Oliver needs Constantine to begin with. You see, Team Arrow has a huge favor to ask of him: they need his special expertise in order to restore Sara Lance's soul to what it once was.

Last week, we saw the repercussions that came after Laurel brought Sara back to life by using the Lazarus Pit. And just like Malcolm Merlyn warned and Thea herself has started to prove, once someone goes into these magical waters, they never come out of it the same way. The Pit changes you and not ever in a good way. Thea has developed a bloodlust and given the killing spree Sara has just started to go on in lieu of her escape, I'd say she's suffering from an even more extreme case. But given how well-versed Constantine is in all things magical, he's the best chance they have of changing Sara back to the person they all once knew and loved.

But this is more than just a matter of saving Sara's soul. It's also about protecting someone very near and dear to Oliver's heart: Thea. We recently learned on the show that the Lazarus Pit doesn't just give its users bloodlust, but also forces them to seek out revenge on the person who originally killed them. And in the case of Sara, that means her target will inevitably be Thea. (Even though, technically, it was Merlyn who was pulling her strings at the time.) So there's more than just one important life on the line here. No pressure, Constantine!

Don't worry, though. This detective has handled/conned his way out of so many supernatural threats in the past that I'm fully confident he can restore our heroine to her former self. (He's basically the Olivia Pope of the supernatural realm.) Or, better yet, his assistance could very well help her transform into the White Canary we know she's destined to become.