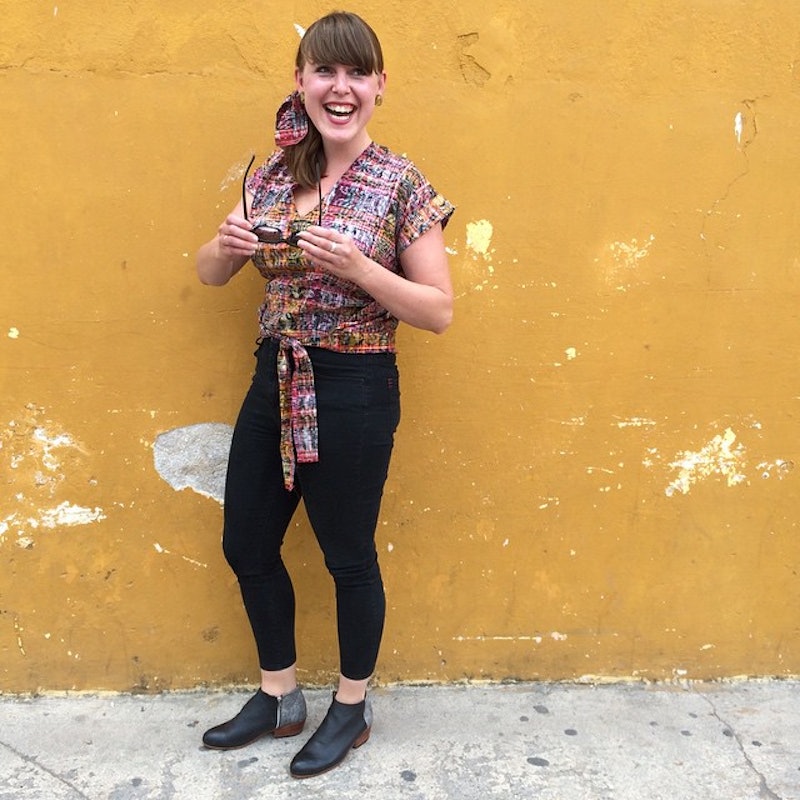 Not to say that I’m old or anything (although I confess that I often fall asleep at like, 8:30 p.m. these days, usually after my Kindle hits me in the face) but I’ve learned a lot of relationship lessons in the past 16 years, since my first boyfriend way back when I was 12. He was in my folk dancing group (yup, I was that cool) and when we french kissed in the back of the bus on our way back from a festival, I thought I would pass out from excitement. (I also thought his tongue felt like a slug but, you know, I choose to remember the romantic things.) Between him and my current partner, there have been many different types of relationships: short term, medium term, totally casual, very brief, move-in-together committed… You get the idea. And I have to say, I’ve learned a little bit from each and every one of them.

For example, there was the guy I dated in college who I broke up with because I wanted the freedom of dating around during the semester I was living in New York City, only to decide when I returned to campus that — just kidding! — I desperately wanted him. Did the fact that he had found a girlfriend in the time that I was gone have anything to do with it? No! Of course not! (Yes, definitely.) Lesson learned: Don’t think that he’s going to wait around for you, even if you’re a smoking hot 19-year-old.

Then there’s the poet/community activist I dated before running away to South America during the summer I was 24. I was broken and sad and had been dating a very standoffish, messed up dude in NYC before I left and just wanted someone to love me. Unfortunately, I was more interested in being loved than loving myself and ended up breaking that man’s heart. Lesson learned: Be careful with other people’s hearts. They are not yours to play with.

Those are just two of the many, many lessons I’ve learned in my 16 years of dating. Here are 12 more relationship lessons that I absolutely live by to this day.

1. “Hot” Is Not A Good Reason To Commit To Someone

Hot is a great quality for your partner to have — obviously you want to be attracted to them — but it shouldn’t be the main reason you’re trying to lock it down. Don’t be blinded by the beauty! Make sure that all of the other qualities you’re looking for in a partner are also present before you decide to be in a longer term relationship with someone.

One of my exes and I are way, way too similar, which is something I didn’t realize until I had a couple of year’s perspective on the relationship. (Not sure how I missed that one. We had basically the same haircut while we were dating…) Our similarities meant that we often messed up in the same ways and didn’t push each other as much as we should’ve. Don’t make this mistake! There’s a reason “opposites attract” is such a popular cliche.

3. Moving In Is A Good Way To See If Your Relationship Could Last

If you move in together, chances are you’re going to break up pretty soon thereafter. There are a million different stressors that come with moving in that will seriously put your relationship to the test. However, if you don’t break up within six months of starting to cohabitate, you’re probably in it for the long haul.

But for real though. Bad sex can get better but if you two just have totally different needs — like, say, they can’t get off without a full St. Andrew’s Cross but you’d really rather do it in missionary every time — then it’s not going to work out. On the other hand, the fact that you’re sexually compatible shouldn’t be the only reason you’re with someone either, unless the relationship is only about sex.

5. It’s Not Worth It To Always Be Right

Ugh, this one was a hard one for me to learn: Sometimes you just have to concede the argument, even if you know you’re right. You have to weigh what’s more important, winning or long-term happiness with your partner. While sometimes winning is absolutely what you want, other times you really just have to say, “You know what? You’re right, baby.”

6. Never Let Them Put You Down

Never, ever, ever. I stayed in an abusive relationship for far too long after my ex started insulting me in major ways. I hated myself for months after finally leaving him, blaming myself for not heading out the door the first time he called me a “slut.” While he was extreme, I learned to never, ever tolerate insults from my significant other. Period. The end.

7. Find Someone Who Makes You Better

Your partner should push you to be your best self, while still celebrating who you already are. They should want to see you succeed and do whatever they can to help you get there. A partner who makes you better and who is committed to helping you be your best self is a partner who’s in it for the long haul.

I tend to be a kind of obsessive, want-to-spend-every-minute-with-you lover. However, I’ve learned that space is super important, for my sanity, my partner’s sanity, and the sake of our relationship. Give yourself time to miss each other! A little time apart, whether it’s nights out on your own or even separate vacations, does wonders.

When you’re first in love, you think that the feeling is going to last forever, right? That giddy, bubbly, everything looks bright thing? Yeah, it doesn’t. When you’re with someone for a long time, you fall in and out love. That doesn’t mean you stop loving each other, just that the being in love part comes and goes in waves. If you find yourself in a trough, don’t despair! Keep treating each other well and that love will come back.

10. Relationships Don’t Have To Last Forever To Be “Successful”

Our culture has this idea that you have to be with someone until one of you dies in order for the relationship to be “successful.” However, I’ve had a few relationships that have lasted varying amounts of time that I would totally call successful, even though they didn’t end with a grave. Also, all of those relationships brought me to where I am today and I really like where I am today, so I’d say they were a huge success!

I really wish "the one" would die. As Dan Savage is known for saying, there is no “one,” just those that that you round up to one. No one person can be everything for any other one person and expecting anyone to be that sets you up for failure. Stop looking for “the one” and instead figure out to love a one as much as you possibly can.

12. You Will Fall In Love Again

I’ve been through a couple of really major heartbreaks and every time I thought, “This is. I’m never going to fall in love again.” However, every time, I did fall in love again. The human heart — even yours! — has more capacity for love and regeneration than you could ever imagine. Trust it.