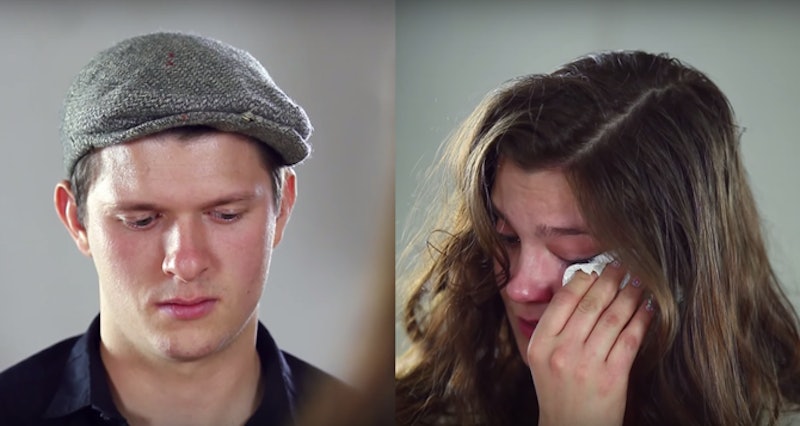 The Internet has been abuzz with the release of a new video from the The And, an interactive documentary in which numerous couples of various sexualities and genders ask each other extremely honest, personal, sometimes beautiful, sometimes uncomfortable questions about their relationship history, struggles, and successes. Some of the partners that you'll get to know are far into their adulthoods and have been together for years, others are teenagers sharing their last summer together before college, and a couple people are exes. As you view these conversations, you will be moved by the incredibly raw and unique perspectives of intimacy, trust, support, jealousy, and heartbreak.There is clearly a lot that we can learn from the documentary.

Watching The And has proven to be a profound experience for so many people because it lifts up such real, complex, and not always romantic depictions of relationships, because relationships require hard work and brutal introspection if a deep connection is ever to thrive. We get to witness the growing pains of relationships that many of us never learn how to handle from our parents, as the grittier moments are often hidden from us. But that means no one ever teaches us how to rebuild a damaged relationship, or how to discuss boundaries, or how to communicate in a healthy way when times are dark. The And lets us watch these conversations unfold.Here's a look at some of the lessons The And can teach us, though I highly recommend that you experience the project in its entirety to find even more of the wisdom within it.

Guys, relax. Stop analyzing that 15-second interaction with your crush about the different kinds of soda in the break room. According to the couples in this documentary, good first impressions are IRRELEVANT. There were obviously couples who used words like "magic" when describing their first interaction, but quite a few of them laughed about their partner's obnoxious jokes, ill-fitting clothes, and awkward dating behavior. If those kinds of first impressions still led to long-term partnerships, then there is hope for us all!

2. "Cheating" Does Not Always Signify The End Of A Relationship

It is, of course, up to each individual couple to decide their boundaries and what constitutes cheating. Numerous couples discuss the act of cheating in The And, and all have different opinions on infidelity, and what really is infidelity, anyway. Some are absolutely certain that they would never be able to forgive their partner, let alone look at them anymore. Others differentiate between emotional cheating and physical cheating, and thus aren't bothered by physical cheating. Other couples are polyamorous, and completely disagree with sexual ownership and only ask for open and honest communication.

If you are part of a monogamous couple and you are wondering if a relationship can ever recover from unfaithfulness, then you should look to Tamika and Stan, dating for six years, as a stellar, raw example of perseverance and honesty. During their conversation, Stan asks, "How can you be with me after I've broken your trust?" Tamika admits that she wondered that for a long time, and she owes their relationship to exhausting, thorough, unpretty, and ongoing communication and discussion that has allowed her to slowly rebuild her trust. As Tamika explained, "We had to hash it out. It took time, patience, talking, more talking." She also had to consciously take a risk, "step out on a limb, be vulnerable." Stan has accepted that these kinds of conversations are now part of the relationship. And this allows them to still be a strong couple today.

For real, if you are interested in polyamory, many couples in this documentary provide accessible breakdowns of how and why polyamory works for them. So check it out.

It's heartbreaking, but couples often use their fear of hardships as an excuse to abandon each other. The And allows us to witness couples embrace and prepare to overcome any obstacles, which is inspiring and comforting. Sidra and Ben have been married for 10 years and are now expecting their first child together. Throughout their conversation, the two hold nothing back about parenthood nerves and how their relationship may temporarily weaken following the birth. Sidra is horrified that she may subconsciously recreate her damaged relationship with her own mother, and Ben is aware that a new baby will alter their dynamic as a couple. Despite these stressors, Ben is able to comfort Sidra by expressing his belief in her maternal love, and they both remind each other that they have already survived so much as a couple, so what's one more obstacle? Their conversation is proof that fear shouldn't destroy a relationship, but instead open up new pathways of communication and allow for more vulnerability.

5. Don't Pressure Your Partner To Always Be Strong In The Face Of Mental Health Struggles

Cammie and Erin, a couple who have been dating for eight months, demonstrated beautiful acts of support during their interview. The first question that one of them reads in their session is "Where do you think I may fail you?" which prompts the other partner to immediately respond, "I don't place that kind of expectation on partners. I don't want my partner to ever think they can fail me... I just don't want to put anything like that on you." The relieved partner expresses how much that statement means to her, because she sometimes fears that all of her "issues" will one day be too much to handle and the relationship will dissolve. Strong partnerships allow room for "weakness," mental health struggles, vulnerability, growth, and complexity. As Cammie and Erin remind themselves, they are there for each others "fights against the world" and "fights against brain chemicals."

When the couples were asked to describe their greatest challenge as partners, an overwhelming amount responded with their families.— be it their intrusiveness, controlling behavior, or disapproval of the relationship. So if you've always worried about how your crazy family may negatively affect your future serious relationship, then you can take solace in the fact that you aren't alone.. and that some of the couples sharing these concerns have already managed to stay together for years.

7. Embrace All The Weird Things That Make You Feel Close

This is one of the most fun parts of any relationship. While, of course, some of the partners answered that they felt closest to their partners through sexual intercourse, others responded with much more specificity — feeling closest while watching Daria, making out with bad breath, seeing each other drool in their sleep, and even arguing.

8. Don't Let Go Of Your Independence And Don't Give Up On Your Friendships

If you aren't personally guilty of neglecting your friendships once you've entered a serious relationship,then you've probably witnessed a friend's sudden disappearance as soon as she changes her relationship status on Facebook. Falling in love creates a literal addiction to your partner, and you'll often behave less rationally. Giulia and Elijah, who have been dating for seven months and are sadly preparing for a breakup once they leave for college, addressed this problem in their interview. Any possible regrets that Giulia predicted having about the relationship all revolved around time she may have lost with her friends. In her own words, she said that she didn't "want to miss out on being socially independent." Giulia and Elijah were clearly enamored with each other and devastated by their impending breakup, so their strong connection should remind you that fostering your life outside of the relationship shouldn't weaken it.

9. Fights And Disagreements Are Normal

It cannot be said enough: fights and arguments are a normal, healthy part of all mature relationships. They are necessary to grow together as a couple. Don't be afraid of having them, and don't think that they signify a doomed relationship. As Stan told Tamika, "When we're at our best, we're outstanding. When we're at our worst, we're horrendous... but our worst is getting better." Similarly, partners Hayley and Sarah respectfully argue over whether or not to verbally defend one another against street harassment and then share their desire to eventually marry each other only minutes later. Sidra and Ben acknowledge the rough patches that they are bound to struggle through as new parents, but Ben asserts, "We can always make it back here," back to their good days. All of these moments between partners should serve as examples of how to argue, and as proof of why it is OK to argue.

10. You Will Always Have Things To Learn

Marcela and Rock have been married for seven years, but have been a couple for 25 years. Rock tells Marcela that his favorite part of the relationship is that "after 25 years, I am still learning more about you to love." UGH YOU GUYS <333333