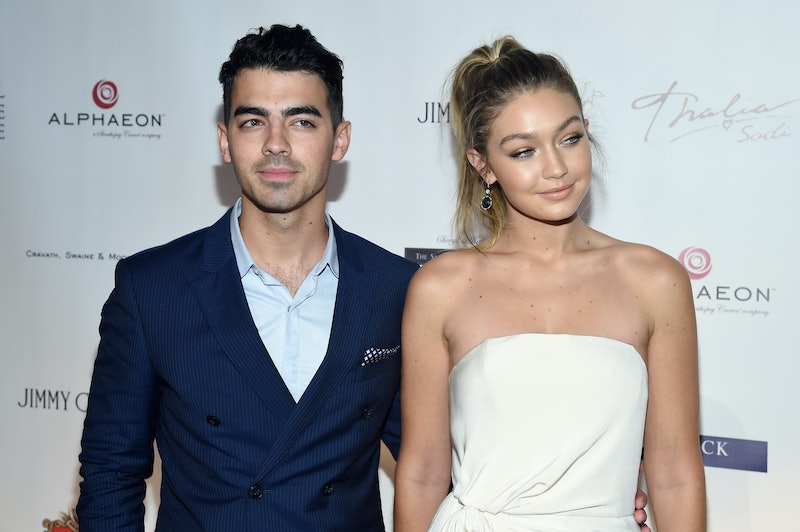 Did you hear that? Oh, it's just the sound of collective hearts breaking across the country. That's because reportedly Gigi Hadid and Joe Jonas have broken up. On Wednesday, People revealed the sad news, citing an inside source. The couple, lovingly dubbed "G.I. Joe" by fans, began dating early in the summer. While they were shy to admit it at first, Joe's brother Nick Jonas spilled the beans. (Oops! Gotta love brothers.) After that, Hadid and Jonas spent 4th of July together at Taylor Swift's patriotic bash, and then made their red carpet debut in October.

While, of course, it's a bummer that the best-named couple has come to an end, there is a silver lining here! Seriously, there is some good news: There doesn't seem to be any bad blood between them. The source told People it was pretty much a mutual split, saying,

Joe and Gigi’s relationship recently ended. Nothing serious happened ... it wasn’t a dramatic break up. It was just hard to make it work with their schedules. They will definitely remain friends.

Understandable that they have busy schedules, especially given Hadid's ever-growing career. After all, she recently landed a spot in the Victoria's Secret Fashion Show alongside pal Kendall Jenner. Something tells me she'll be just fine! Plus, she's got a squad of amazing friends like Taylor Swift to lift her spirits. As for Jonas, he's got a strong support system (including multiple brothers) to boost his mood.

Although any break-up is hard, at least these two can stay friends. That's gotta count for something!