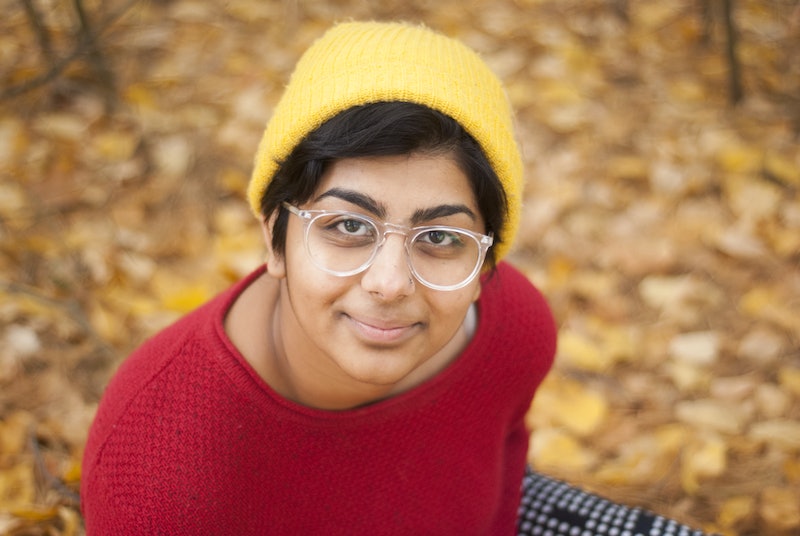 Growing up in the United States as a Pakistani and visibly brown woman hasn't exactly been a piece of cake. As someone who is constantly harassed and tokenized for my non-white skin and non-white features, I've develop a pretty thick skin — as well as an arsenal of comebacks for microagressions women of color face daily. I like to toss them out casually every time someone ignorant tries to mess with me. It's basically like having a superpower that's only activated when someone says something rude, ignorant, or misguided. What a time to be alive, right?

In case you're not quite familiar with the term, a microagression is a form of discrimination that can often disguise itself as a benign comment or something that's just a little ignorant, hence the "micro." Examples of microagressions would be asking gay people when they "turned gay" or telling a woman she should smile more — in both these cases, the intent of the speaker may not scream homophobia or misogyny louder than actual slurs or violence might; however, they are still harmful assumptions and ways to shame people nonetheless.

So if you're a woman of color and are met with an irritating and harmful microagression, try a variation of one of the following responses.

1. If: Someone Tells You They "Don't See Skin Color"

In order to appear like they're not racist, a lot of people tell me they don't even see skin color and are "color blind." Often, these are the same people who support #AllLivesMatter.

Try: Telling Them Why It's Actually Very Important to See Skin Color

2. If: Someone Tells You Your English Is Good Despite Being a Person of Color

When people first meet me, they love to compliment me immediately on my English. As a person of color who grew up in this country, has a U.S. citizenship, and has been part of the American school system since kindergarten, it's a strange thing to hear. The underlying microaggression in the compliment is one that says, "Your skin is different, therefore you aren't one of us," even though my upbringing says otherwise.

Try: Saying, "I'm Sure Yours Could Certainly Use Some Work, Though!"

OK, I know this response is a little sassy. But sometimes, sassy is the best way to shut a microaggression down and make the person who said it rethink the ground on which they stand. Throw out a bunch of your favorite big words (mine include effete, solecism, and desultory) in an articulate sentence, watch them slowly become confused, and walk away.

3. If: Someone Asks You Where You're Really From

For me, the answer to the question, "Where are you really from?" is the United States. Sure, I was born in Pakistan, but I came to the U.S. before I was out of diapers, did all of my primary and secondary schooling here, vote in U.S. elections, and embarrassingly know very little about the country where I was born. Even though I identify as Pakistani-American, how could I possible be from Pakistan when I know nothing of the culture or climate, let alone never actually having lived there?

Try: Explaining Why That Question Is Alienating

News flash: White Americans are not the only Americans. While I don't think people always deserve an education on why they're being problematic, it might be useful to gently remind them that you can be a person of color and be from the United States. If this response isn't sassy enough for you, alternative responses include, "Where are you really from? Because we're all immigrants here, aren't we?" or "You know, it's not about where we're from, it's about where we're going." (Cue the cheesy music in the background.)

4. If: Someone Raises Their Voice to Talk to You, Assuming You Don't Speak Their Language

And also somehow assuming that yelling will help your "learning process."

Try: Responding to Them in Whichever Language You're Most Comfortable

Because English is in no way inherently superior — and no amount of yelling will help them understand what you're saying to them in a non-English language, either. It's a two-way street.

5. If: Someone Tells You They Can't Be Racist Because They Have Friends of Color

This microagression works to grant those who aren't people of color immunity and invalidate anything a person of color may be saying to them about racism.

Try: Reminding Them That Their Friends of Color Don't Serve as a Shield

Sorry, but you can't really hide behind your "token black friend" or "token brown friend" as a way to exempt yourself from saying something problematic. You can still make harmful assumptions about race or commit racially charged violence and harassment while having friends who are people of color.

6. If: Someone Tells You "You're Really Pretty for an [Insert Race or Ethnicity Here] Person!"

This implies two things: One, that this person believes my beauty only exists within a certain race or ethnicity and doesn't fit white cultural beauty standards (therefore attempting to "other" me once again); and two, that people who belong to the race or ethnicity they're discussing aren't attractive.

Try: Saying, "Actually I'm Beautiful Because of My Own Unique Traits and Characteristics!"

Alternate responses include, "My beauty doesn't care what your white standards impose on it." My personal go-to is always "No, Im actually beautiful because I'm Pakistani." Bye, haters!

7. If: Someone Asks You to Speak for Your Entire Race or Country

And therefore reduce a vast number of people to one generalization or experience.

Try: Explaining the Complexity and Vastness of Racial, Cultural, and National Experiences

Because my experience as a brown person will vary dramatically from another Pakistani woman's, and that's OK.

8. If: Someone Tells You Not to "Pull the Race Card

You know, when they're being racist.

Because racism isn't a "card" you can pull and you're not getting riled up about an issue for no reason.