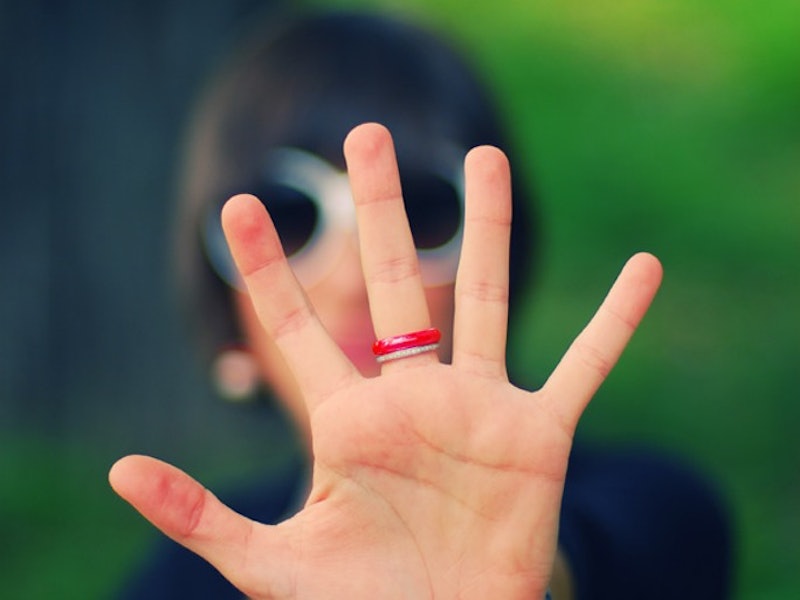 Though most women face sexual harassment, stereotyping, mansplaining, and other forms of subtle sexism on a regular basis, we don't always know how to respond to microaggressions in the moment. Taken aback by another person's sexism, we're often left with a case of "staircase wit" — formulating the perfect retort far too late (i.e. once you're already headed down the stairs, hence the expression). We're always reading articles about the poised and intelligent responses celebrities have given to sexism, but when it comes to thinking of comebacks ourselves, we sometimes need a little help.

To help out, here are a few of my favorite ways of responding to the microaggressions women regularly face. There's no requirement that you use them — or any comebacks, for that matter — if you don't feel comfortable, of course; sometimes, you're just not in the mood for a confrontation and you'd rather change the subject and avoid that person thereafter. But if you've deemed it worth your time to call out someone's sexism, whether to prevent them from committing future microaggressions or simply to defend yourself, here are some strategies you can use. Before you pull one out, you should understand there's a chance that they'll respond unsympathetically, so you need to feel good about your decision no matter how they respond — which you should anyway, since their sexism says nothing about you.

1. If: Someone Tells You Your Outfit Is Too Revealing...

This one takes many forms: "That shirt looks trashy." "That dress might provoke unwanted attention." "Are you sure you want to wear that skirt?" You've heard them.

Try: ...Saying "Nobody's Reaction To My Clothes Is My Problem"

It really isn't. People see women dressed in revealing clothing every day and don't harass them. If someone decides to harass a woman, it is because that someone made that decision, not because of her clothes — even if the perpetrator of the microaggression uses them as an excuse.

Catcalling is a form of sexism because it reminds women that they're not safe on their streets and that their bodies are considered everybody's business.

Try: ...Asking Them To Repeat Themselves

Stop Street Harassment founder Holly Kearl said in a talk at NYU that asking street harassers to repeat themselves makes them examine what they're doing. Knowing you're not an object but a person who can not only get hurt by their catcalling but also judge them can embarrass them — and possibly cause them to stop.

Asking women to change their faces so you have something better to look at conveys a profound sense of entitlement: How dare we let our faces fall into a position that's not aesthetically pleasing to a stranger?

Not everyone will relate to what you have to say about sexism and objectification, but since nobody wants to be told what to do with their face, this statement gets your point across in a language everybody understands. Last time I tried this, the man who told me to smile said, "I like your attitude." Winning, I guess?

4. If: Someone Uses A Sexist Insult That Isn't Actually An Insult...

"Bitch" often falls under this category since it often just means a woman who has opinions, as does "slut," because since when was liking sex a bad thing? (Oh, right. Since the founding of America.)

I borrowed this one from Gloria Steinem. If a bitch is a woman who speaks her mind and a slut is one who enjoys a lot of sex, then I'd say both are compliments. Saying "thank you" draws attention to the fact that these qualities shouldn't be negative.

In case you're not familiar with the term, mansplaining is when a man tries to explain something to a woman that she knows more about than he does.

Try: ...Showing Off Your Own Knowledge

It's OK to show off a little. Clearly the mansplainer has no trouble showing off, after all. If he wants to talk about Brazilian culture, tell him all about the years you spent there. If he's telling you all about black holes, go ahead and wow him with your astronomical prowess. He may act like he knows more than you, but watching a few Neil deGrasse Tyson videos does not an expert make.

6. If: Someone Doubts Your Abilities...

People often ask men to tackle the most difficult work projects, lift the heaviest objects, or take charge of a group because they believe, whether consciously or subconsciously, that women won't be able to handle it.

Try: ...Reminding Them Of Your Accomplishments

Especially in the workplace, you often have to advocate for yourself because people won't automatically remember everything you've accomplished. Reminding someone that you've done something before is a great way to make the case that you can do it again.

7. If: Someone Asks When You're Getting Married Or Having Kids...

As writer Emily Bingham points out above, asking women when they're having kids not only imposes a timeline on them that they might not consent to but also can hurt those who have been struggling to have kids. Same goes with "When are you tying the knot?" or "Have you met any nice boys?"

I found a few funny responses to the kids question on Ask MetaFilter. "As soon as they're worth more on the black market" and "As soon as I figure out how" are a couple of my favorites.

8. If: Someone Insults Feminism...

Try: ...Pointing Out What It Really Is And Who Is On Board