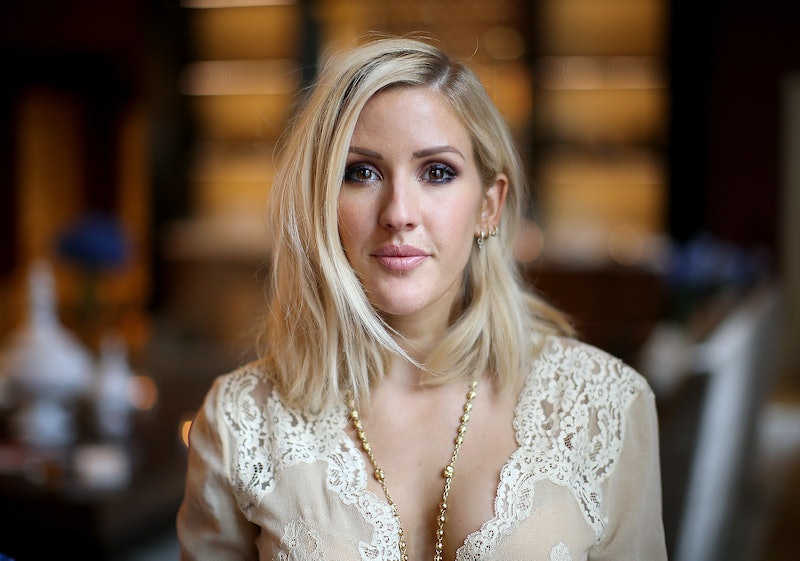 Ever since "Love Me Like You Do" came out, I've been craving new Ellie Goulding music. Don't get me wrong — the song from the Fifty Shades of Grey soundtrack was great, but it just wasn't enough! I wanted more music, like an entire album's worth. Luckily, Ellie Goulding's new album Delirium drops on Friday, Nov. 6, and the songs she's released thus far are amazing. From "Army," a track about her BFF, to the catchy, optimistic "Keep On Dancin'", these songs prove the album will definitely be worth the wait. In case fans are looking for a way to tide themselves over until then, they're in luck: Ellie Goulding released lyrics to all of the songs on Delirium through Genius, along with some special annotations.

On the Genius site, Goulding reflects on her lyrics and gives fans time to ponder their meanings before the songs are officially released. It's a perfect teaser to pass the time, because if we can't yet hear all the songs, at least we can pore over the words, right? Plus, in the video below, she shares her favorite lyrics, which are from the track "Scream It Out." She deems it one of the more "anthemic" songs on the album.

Here's a list of the best lyrics from Goulding's Delirium that will make you even more excited for its upcoming release. (If that's humanly possible!)

This song perfectly sums up those BFFs who are there no matter what. As Goulding explains in the annotations, "One of my best friends has been with me since college. We spend a lot of time on the road together. When I am with her, I feel like I can take on anything." That's exactly how friendship should be!

These lyrics feel a little Taylor Swift-esque — and there's nothing wrong with that. Reminiscent of "Shake It Off," the song spreads an empowering message about not letting people get you down and dancing through it all.

I've always had a thing for silenceBut lately I just need a voice I recognizeBaby, it's perfect timing now to...Scream it out, outI won't let you down, down

One of Goulding's favorite songs of the album, she writes on Genius, "It summed up a time in my life where I needed to recognize not being okay and then just communicating it and getting through it." Such an important message in terms of mental health and asking for help! Everybody goes through rough patches and sometimes all you can do is let it out.

Goulding says this song is pretty self-explanatory — and she's right. But she elaborates more in her annotations, saying, "The song tries to explain that feeling of being devoted to one person in the world. I guess I am most devoted to my music. It is kind of my entire life."

Damn, boy you make it hardShouldn't need a riddle to unlock your heartSo, say what's on your mindWe got other things that we could do with ourTime, we could rule the worldKnow you say you never need another girlBut, you're not making senseTrying to keep it moving while you're on the fence

Preach! The lyrics for this song describe what it's like when guys avoid saying what's on their mind. Sick of the games, Goulding sings, "Stop talking in codes, stop talking in codes." In the annotations, she explains, "We wrote around that lack of communication, not really knowing what another person is thinking, which is very common."

In this track, the lyrics imply it's about a couple that's meant to be, but hasn't quite worked out. The song begins with the words, "We're summer kids / Without a song, we're fading in to oblivion / But we're still the one."

Is there anybody out there waiting for me on my way?If that somebody is you, then baby, I just wanna sayTonight, nothing will bring us downTonight, we're at the lost and found

This romantic song seems to be about reuniting with an old love — perhaps from her hometown or somewhere she hasn't been in awhile.

You're the fear, I don't careCause I've never been so highFollow me through the darkLet me take you past the satellitesYou can see the world you brought to life, to life

Good news! The song from the Fifty Shades soundtrack is also on Goulding's new album. So obviously it had to be included in this list. These lyrics are among the best in the song.

Lost in you, lost in meAfraid of love, in too deepSo we just run and hideLightning fast, felt the crashScared to lose, fear attacksWe only know goodbye

From the sound of it, this song is about holding on to an already crumbling relationship, as if it's not falling apart.

When I look into your eyesBoy, I'm feeling deliriousBut you know this is seriousI'm sticking to you like glueOnly see you now and then, but I know we could have it allBecause before I was cynical, baby you were just cool

Not sure which part of these lyrics I like more — the rhyme of "delirious" and "serious," or the phrase "sticking to you like glue." Either way, I'm excited about this track, which seems to sum up what it's like being around someone you find irresistible.

You don't mess with love, you mess with the truthAnd I know I shouldn't say itBut my heart don't understandWhy I got you on my mind

When this song dropped in September, there were rumors that it was about Ed Sheeran. Clearing things up, Goulding said in an interview with MTV that the song wasn't about anyone in particular. Regardless of the inspiration, the lyrics above sum up trying to piece together the pieces when a relationship or fling didn't work out.

I can't show you my love that you showed to meWhen it isn't enough, I won't make-believeYou know I'm not the oneBaby, leave love aloneLet it healLet it heal

Sadly, sometimes relationships just don't work out, and that's the message conveyed in this song. All you can do in those situations is end things and let the person heal.

There's so much to lose, but so much to learnLet's call it a maybeBut we both know you're already goneAnd just because it feels like I'm breakingIt doesn't mean I will fall apart

This track seems to be about admitting defeat and letting her partner leave her for someone else. But she doesn't let it get her down, as illustrated by the lyrics, "Maybe it's good for you / It's good for me."

OK, now I can't wait to actually hear all of these songs. Is it Friday yet?!