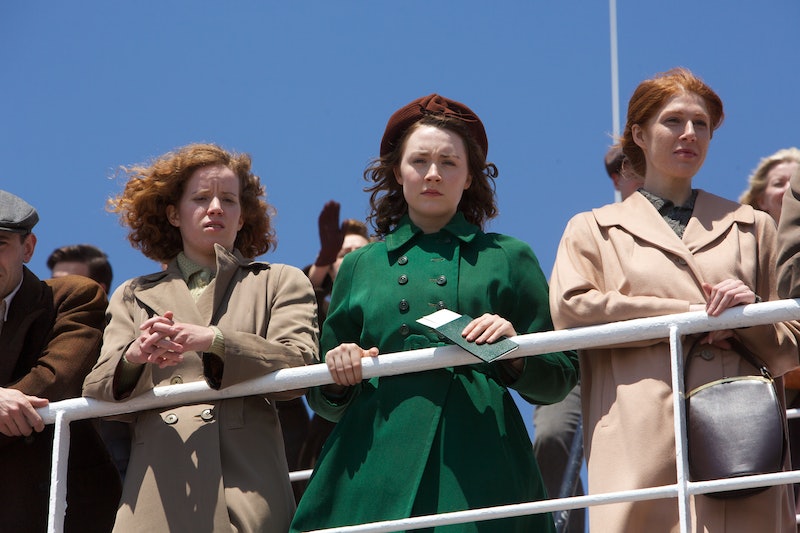 If there's one lesson to be learned from Brooklyn, it's that we're all immigrants, in one way or another. The film, which opens Nov. 4, is based on the novel by Colm Tóibín and stars Oscar-nominated Irish-American actress Saoirse Ronan in its lead role. The film is stunningly beautiful, with performances so powerful that there's buzz of Ronan earning her second Oscar nomination, and perhaps a win for her work as a young Irish woman sponsored by a New York priest to come to America in the 1950s. Though Eilis is shy and desperately homesick, she eventually makes friends, finds a job, and meets a charming young Italian-American boy named Tony, played by Smash 's Emory Cohen. From the moment I, in the audience, first saw Eilis and Tony begin dating, an overwhelming feeling swept over me and remained as I watched the rest of the film. "This is my family," my heart said.

You see, my mother is second-generation Irish. Her grandfather arrived in America from County Roscommon at the age of 15 in 1910. The woman whom he would eventually marry had come over a year earlier with her sisters, and was working as a cook. When my mom was a kid, my grandmother was still receiving letters from Ireland about how bad the potato crops had been that year, and so she would ship her relatives warm clothing each winter.

Like Tony, my mom had the advantage of her family having been in America for some decades, but like Eilis, my father met America at a young age. Along with his parents and sister, my dad left Italy and arrived in New York on the SS Leonardo Da Vinci in March of 1961. He was quite young, but he remembers the docks, the ship, and vomiting at the dinner table from the seasickness, an issue humorously addressed in Brooklyn. My parents met in Philadelphia, and continued a tradition that had begun decades before: Irish Italian marriages. Though Irish and Italian immigrants had butted heads, engaged in riots, and generally hated each other throughout much of America's early immigration years, eventually the tides turned and they quite literally fell in love with one another. “When people talked about intermarriage in the ‘50s, they weren’t talking about black-white, they were talking about Irish-Italian,” Irish-American historian and novelist Peter Quinn told Time about the film.

As I watched Brooklyn and saw Tony, a slick New Yorker adorably court Eilis, whose confidence grows the longer she remains in America, I couldn't help but think of my own parents. Though their situations were swapped, my dad being new to the country and my mom being the American, so much of the film rings true for the experience of new cultures that this country initiates. When Tony invites Eilis over for dinner to meet his parents, his mother serves pasta, followed by a main course of roast beef and peas, a meal that my grandmother cooked for me my entire life. When Eilis twirled her spaghetti into a spoon to try and impress her paramour's family, I chuckled. "You'll get the hang of it," I thought. After years of practice, no one in my family needs the spoon anyway.

But one needn't be Italian or Irish to resonate with the feelings, family, and history of Brooklyn. Practically everyone has a story like this; aside from Native Americans, everyone's family came here from somewhere. My husband's family came in a wave of Eastern European Jews, some from Russia in the 1890s, others a decade later from a town that was once part of Russia, once part of Poland, and is now considered Belarus. The point being: we're all foreigners.

Throughout history, humans have moved from one place to another. A century ago, Europeans were escaping war, famine, and persecution in their home countries and fled here. The world is now involved in a desperate migrant crisis again. Millions of Syrians have abandoned their homeland simply trying to survive civil war and terrorism. Though some countries have opened their arms, others have only met these immigrants with hostility. It seems like Europe has long forgotten its own migrant crises that drove so many of its citizens abroad.

It's not only Europe. Tens of thousands of children have crossed the border from Mexico and South America into Texas, seeking asylum from the violence and poverty that plague their own countries. Yet a man who wants to be president of this country discards them as "rapists" who are bringing in drugs and crime. At a Fourth of July party one summer, I met a man who was wearing a t-shirt that said, "Learn English or Go Home!" He had the Santa Maria Del Fiore, the famous Duomo of Florence, tattooed on his arm. I couldn't help but ask him, "Didn't someone you love come here not knowing English?"

Perhaps Brooklyn can help with that. If the people of America can watch the film and have the same overwhelming feeling of family that I had, maybe it will remind them that their families came from somewhere too. The people that are flooding borders now might look different, speak different languages, and have different religions and different customs, but if Americans can watch Brooklyn and remember that they, too, are descendants of people who were once in the same positions facing the same hardships, hopefully they can open their hearts to this new wave of people hoping to be part of our country.

More like this
"Lavender Haze" Star Laith Ashley Breaks Down Filming With Taylor Swift
By Jake Viswanath
Ozzie’s Coming Out Scene With Kitty On 'That ’90s Show' Has Twitter Sobbing
By Brad Witter
Janelle Monáe’s Nonbinary "Coming In" Was About "Truth & Authenticity"
By Brad Witter
Brooklyn From 'The Bachelor' May Have Accidentally Predicted Her Time On The Show On IG
By Grace Wehniainen
Get Even More From Bustle — Sign Up For The Newsletter
From hair trends to relationship advice, our daily newsletter has everything you need to sound like a person who’s on TikTok, even if you aren’t.