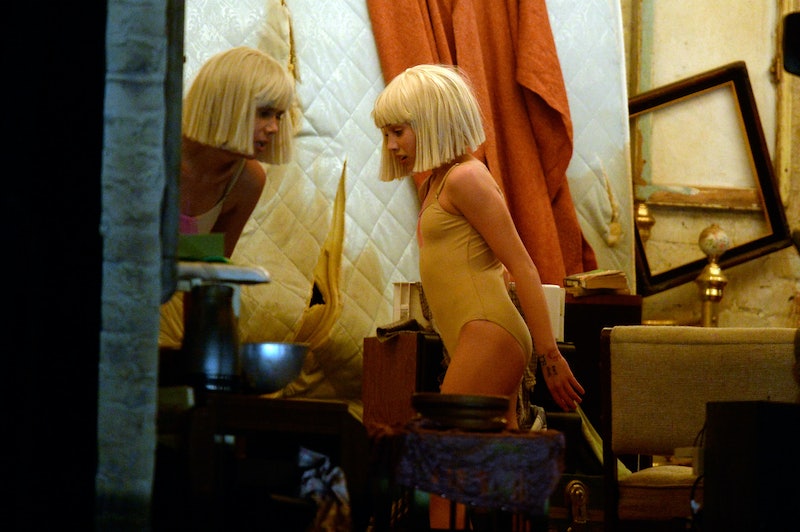 Sia is getting ready to take promotional pit stops across television and radios as the release date of her new album This Is Acting approaches. In fact, Sia will perform on Saturday Night Live on Nov. 7. But, the one thing sorely missing from her promotional rollout that made 1000 Forms of Fear such a culturally pervasive record: Her frequent dance collaborator Maddie Ziegler. Maddie and Sia's last project together was the "Big Girls Cry" video that came out in April of 2015. So, will the pair collaborate again soon? Can we expect Maddie Ziegler to perform with Sia on SNL?

It's not looking likely, especially since there's a new little girl in Sia's newest music video — Maddie appears to have been replaced. That's a shame, though, since Sia and Ziegler's collaborations are legendary. Ziegler joined Sia for almost every live television performance while she was promoting 1000 Forms of Fear. Ziegler and Sia's live performances always included a level theatricality and emotion that other acts can't reach. Here are a few of Sia and Maddie's best live performances together that show just how important Maddie is to Sia's onstage presence — so hopefully we'll be seeing her on Saturday.

The music video for "Elastic Heart" features Maddie Ziegler in an intense dance bout with Shia LaBeouf, and Sia kept a similar tone for her live performance of the song on SNL in January. The performance featured Maddie with dancer Denna Thomsen, in a number that switched from combative to supportive over the course of the song, much like it did in the music video.

2. "Chandelier" — Live At The Grammys

To perform a live version of "Chandelier" at the Grammys, not only did Sia and co. bring on an excellent set design that kept the decrepit tone of the original apartment while having enough glitz and glamour to be Grammys-friendly, but Sia also featured Kirsten Wiig dancing alongside Ziegler for an emotive and compelling two-person performance. It says a lot about both of them that they were able to match each other's high intensity during the dance.

3. "Chandelier" and "Elastic Heart" — Live On The Ellen Show

Sia seems to have a very good relationship with Ellen DeGeneres, which is great for everyone else because it means we get to see Sia go all-out with her live performances whenever she stops by the daytime talk show. The first time Sia performed on Ellen, which was also the first performance of "Chandelier" on live television, she brought an entire set to the show to allow Ziegler to re-create the video to the best of her ability. A few months later, Sia and Ziegler returned for a performance of "Elastic Heart."

Sia and Ziegler are keeping pop music weird in daring ways, and their unique live performances incorporate forms of dance and art that many audience members aren't usually exposed to. While we won't know until Nov. 7 if Ziegler and Sia will be reuniting, we can already tell that whatever performance Sia has in store will be unlike anything else.