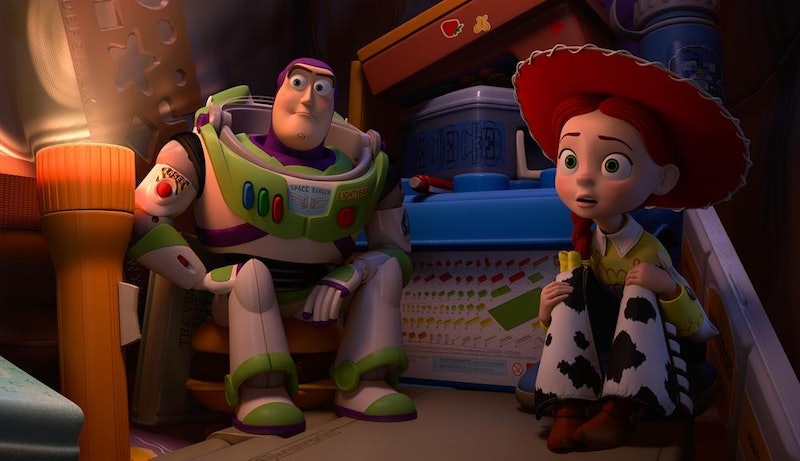 Have you ever thought to yourself, what if Aaron Sorkin made a Pixar movie? Yeah, me neither, but apparently back in the '90s, at Steve Jobs' behest, Sorkin offered a vague pitch to the studio. His idea was so Sorkin-esque you won't believe it. According to Digital Spy, Sorkin pitched a Pixar movie where writing supplies come to life and write a writer's story for him. He admitted he didn't have a second or third act of what sounds like Toy Story meets Adaptation, but given Sorkin's track record I think it is easy to imagine how his Pixar movie would have went down.

Sorkin's projects have certain things in common: an office setting, long walk-and-talk scenes, politics, and neurotic creative geniuses who are kind of jerks (remember Jeff Daniels' opening speech from The Newsroom ?). Now imagine all of those things crammed into a brightly animated Pixar setting. Weird, right? Sorkin isn't exactly known for projects with cross-generational appeal and I imagine kids would have been left more baffled by the movie than they were during the Inside Out scene where Bing Bong, Sadness, and Joy became non-figurative.

Never mind the kids though, the idea of a Sorkin Pixar movie is so awesomely bizarre it must be explored further. I know one thing for sure, his ode to office supplies would have included the following things.

An Angry Monologue From The Typewriter

Given Sorkin's passion for the days of yore (at least politically speaking), I'm going to guess the lead character would be a disgruntled typewriter passed from one aimless owner to the next. He's been used to write crappy middle school papers, to write overwrought love letters, and has had his keys smashed by careless children. Finally, he ends up in the hands of an actual writer only to find the man is a hack. He's mad as hell and he can't take all this crappy writing anymore!

A rousing speech is all it would take for the typewriter to rally the younger office supplies — mechanical pencils, post-it notes, and paper clips — to get behind his idea to write the novel themselves. They can do it because they are idealistic dreamers who can make the world a better place as long as they work together. The younger supplies immediately begin to hero worship the cantankerous typewriter.

The Typewriter's Ex-Girlfriend Becomes Instrumental To The Plot

Voiced by Amanda Peet, the piece of paper that got away will be the typewriter's greatest source of annoyance and inspiration. Less a piece of a paper and more a cheerleader of the typewriter's inherent awesomeness, she would urge him forward in his quest with banter and unabashed encouragement. By the end of the movie she would become the last page of the novel because they complete each other, but they would never last.

The Pencils Have All The Best Walk & Talk Scenes

As the young editors, the pencils are super busy and full of idealistic thoughts they can only voice as they scramble across the pages of the novel erasing, proofreading, and talking about how awesome the typewriter is.

They are the Josh and Donna of the desk organizer.

One Of The Pencils Inspires The Typewriter To Keep Writing

Toward the end of the movie, the typewriter would become deeply discouraged and begin lashing out at the lower level office supplies. Maybe he even starts to overindulge in typewriter ribbons. No one can get him out of his funk, not even his ex, the paper. Enter the pencil. She isn't a major character in the movie, but she has been observing the typewriter this whole time and as she relays how the typewriter has inspired her, he becomes inspired by his own inspiration.

The Office Supplies' Efforts Are Overlooked By The Writer, But It Doesn't Matter

In the end, the faceless writer takes credit for the typewriter's masterpiece. His team is heartbroken, but he tells them it doesn't matter. Only the work matters and they did the best work they could. The writer is a metaphor for the world.

Admittedly, Sorkin's Pixar movie would have been a weird and possibly not at all child friendly story, but those pencils would have been your favorite Pixar characters, and you know it.