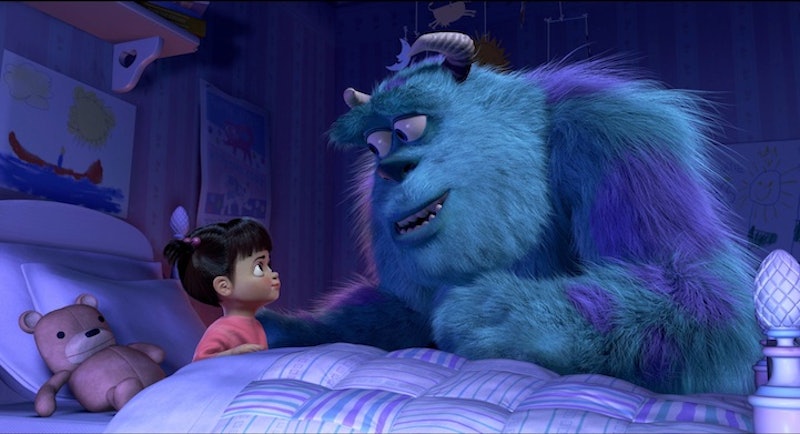 2014's summer blockbuster season was seriously lacking in the Pixar department. As a moviegoer, I have come to expect Pixar to offer up an animated movie designed to induce laughter while also unexpectedly punching me in the heart — it's a good formula — and was devastated to realize that there wouldn't be a new Pixar movie released in 2014. Thankfully, though, 2015 is already looking way, way up in this sense: This June, Pixar is releasing Inside Out , a movie all about the emotions inside of a young girl's mind. Because this is Pixar, everyone should bring emergency tissues to the theater just in case this film manages to break our hearts with such precision, we won't even know its happening. After all, Disney Pixar's weapon of choice with movies is heartbreak, and we have all fallen prey to their emotional manipulation tactics before.

No one expected the beginning of Up to be such a downer in its first few minutes, or for a movie about talking fish to make us all cry. Disney has a long history of not pulling punches when it comes to depicting loss in kids movies, but Pixar has elevated the art of melancholy to a whole new level. No one is safe from the pain of a Pixar movie, especially adults who are often reminded of just how hard growing up truly is. So far, Pixar has released 14 movies with varying degrees of emotional devastation levels. Below, I've listed them from least to most devastating.

Go grab tissues before you proceed, because this is about to become a major cry zone.

Were You Even Trying to Make Us Cry, Pixar?

Cars 2 was not Pixar's finest moment for a lot of reasons. Did we really need a movie about sentient car spies, and centered around Mater? No, we did not. The real disappointment was how utterly devoid of emotions Cars 2 was compared to the first film.

Monsters University was an okay prequel, but it was an empty comedy, lacking any of the heart from Monsters, Inc.

A Bug's Life is the most underrated of all the Pixar movies. It has an amazing revolutionary spirit, and Flik is a terrific character who gets shoved around by the system. However, it is not a movie that inspires tears.

One of the best superhero movies, The Incredibles has a little bit of everything — action, adventure, family drama, and yes, emotional moments. It's not a movie that inspires ugly sobs, but it has its share of touching scenes, especially when Bob thinks his family has been killed in a plane crash.

The original Toy Story is a masterpiece. It is definitely one of the most enduring films about friendship ever made. When you separate nostalgia from the equation, though, it is not a particularly sad movie: Aside from the scene where Woody watches as Andy slowly begins to replace all of his cowboy decorations with Buzz decor, it's mostly a buddy comedy.

Ratatouille is gorgeous from start from finish, but it is not until Remy's dish warms the critic's cold heart that the movie hits you straight in the feels.

Cars plays up the yearning for a past that the generation the movie is aimed at cannot remember. The ideas of aging, nostalgia, and dying small towns gives Cars an unexpected weight only adult viewers can fully appreciate.

"Go ahead, go grow up." The ending of Monster's Inc. is one of the most heartbreaking movie moments ever. The pain is real guys, and it's made even more real because Sulley is so certain he will never see Boo again.

If you can get through Brave without sobbing and calling your mom to say "I love you," then your heart is made of some industrial-strength steel.

Hey, you know what's a great way to begin a kids movie? By having the main character's wife and 399 of his children being murdered. Thanks for that, Pixar.

So humans trash Earth, leave it behind, and abandon a sweet robot to live out his life completely and utterly alone? That's the movie? Nope, the heartbreak is way too real.

Goodbye, childhood! It's all downhill from here, folks.

Up gets a category unto itself because no other Pixar movie has ever been as unexpectedly devastating as this one. Ellie and Carl's love story gives way to a movie that just keeps the punches coming. It's wonderful, but the tears never really stop with this one. Can Inside Out possibly one-up Up when it comes to the heartbreak factor? Knowing Pixar, they will probably try.