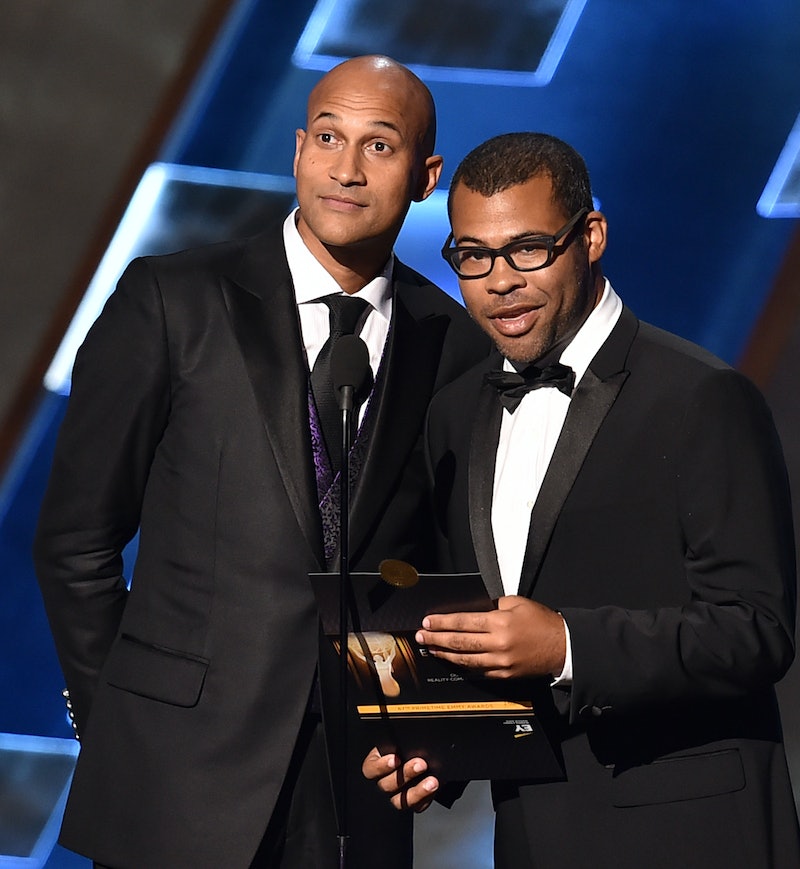 I know there are other fans out there that miss Key & Peele — the groundbreaking and hilarious sketch comedy show from duo Keegan Michael Key and Jordan Peele — since it ended its fifth and final season on Comedy Central earlier this year (sob). But, to those people, I say this: Worry not! Key and Peele have been busy, so we shouldn't be too sad, because they're going to be entertaining for a while. They're even branching out and collaborating with big stars! On Wednesday, Allison Williams was cast in Jordan Peele's horror movie Get Out in what will be her feature film debut.

Peele wrote the script and is set to direct the film, which, will deal with race relations. As Bustle's own Kaitlin Reilly explained, "tells the story of a black man (Peele) who visits his white girlfriend's family's estate." In a statement, according to The Hollywood Reporter , Peele expanded on the project: "Like comedy, horror has an ability to provoke thought and further the conversation on real social issues in a very powerful way... Get Out takes on the task of exploring race in America, something that hasn't really been done within the genre since Night of the Living Dead 47 years ago. It's long overdue."

So what else have these two been up since Key & Peele wrapped? Being prolific and hilarious, naturally:

They're Making Movies Together

Just because their sketch show is over, doesn't mean these two are done collaborating: far from it. In fact, this summer they worked on a comedy called Keanu in New Orleans, which, according to the Washington Post, is about "two guys who pose as drug dealers to rescue their stolen cat, named Keanu."

Key and Peele are bringing their joyful talents to the world of stop-motion animation! According to Variety on Tuesday, "Henry Selick, director of stop-motion classics Disney’s The Nightmare Before Christmas and Laika’s Coraline, is developing a new stop-motion feature with Jordan Peele and Keegan-Michael Key based on an original story by Selick." And it's going to be about demons and goth teens... I kid you not.

And that's not all: Key is also doing voice-work on the upcoming Angry Birds movie, and Peele is lending his voice to a Captain Underpants animated feature. Kids should enjoy Key and Peele, too!

After their brilliant guest-spot on Season 1 of Fargo , Key and Peele are continuing to dabble in guest-starring on other shows, and those shows are lucky to have them. Key, who also had a role in the last season of Parks & Recreation as Donna's sweet, gentle former beau, will be appearing on House Of Lies opposite Don Cheadle, it was announced on Tuesday.

They're Still Making Time For Their Boos

If you didn't know that Jordan Peele was dating Chelsea Peretti, well, consider me telling you an early birthday present. They are adorable together, and probably the funniest couple alive.

Another Show In The Works?

I don't want to get my hopes up too much about this one, but the duo told The Wrap that there could possibly be another Comedy Central show "in the works." I think they know where their loyal, loving fan base is at.

Luckily, it looks like we're going to see a lot more of Key and Peele in the near future.