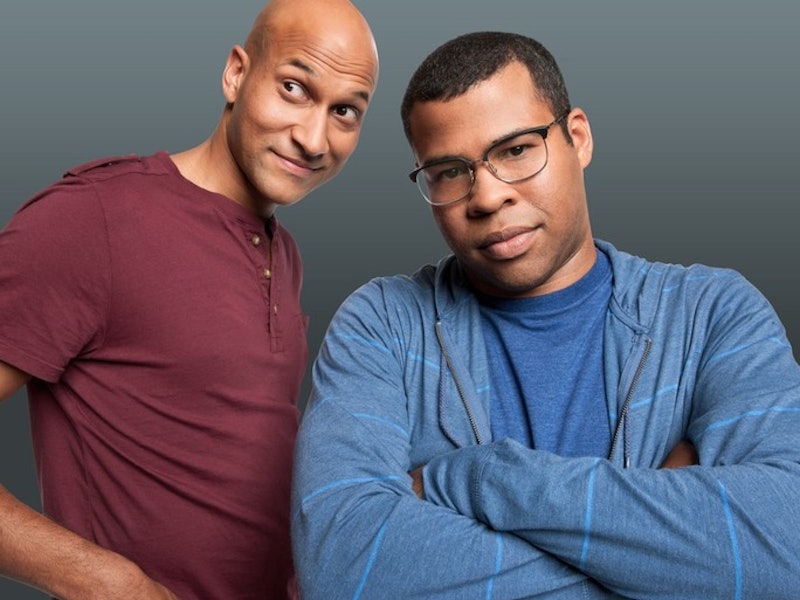 For those still reeling over the news that Comedy Central's Key & Peele will be ending its run after five glorious seasons, I have a silver lining for you. Keegan-Michael Key recently sat down with Jimmy Fallon on The Tonight Show to discuss his and Jordan Peele's reason for the arguably premature ending. "We're gonna go the British route," he told Fallon. "You know, where they do like three or four seasons of everything and they go, 'We're done! We're bloody well done!'" Although the comments were laced in jest — and Key's delightful take on a British accent — the sentiment offers some insight into why the surprising curtailing of the series may actually be a good thing.

Obviously, both comedians helming the series are choosing to end it on a high note. For this reason, the show will never risk becoming stale or taking part in the dreaded misstep known as "jumping the shark." Even the most beloved of series have fallen victim to a lag or abysmal story arc after staying on the air for so long. Hey, it's hard to keep things fresh after a certain number of years. Although I will be one of the many reaching for a kleenex during Key & Peele's final episode, I can appreciate that I will be able to properly re-watch the entire series without having to skip over a season.

This is far from the first time a series was able to go out with a bang. While some shows are given the axe against their will, others decide to pull the plug even when ratings continued to soar. This benefits the fans by giving them nothing but sparkling memories of their favorite TV fodder. Below are a few television gems that avoided staying on the air well past their expiration date.

The late '90s hit was still receiving lauds when Sarah Jessica Parker and co. decided to end the series on a high note. Although SATC fans ached for more episodes, the hit could have run the risk of growing stale had it gone on much longer.

Ah, vintage Jason Segel! Although this show was given the axe prematurely (i.e., it only lasted one glorious season), fans will remember the series as a beacon of '80s-inspired glory.

Each pulsing moment of this series was carefully crafted up until the series finale. With such deftly created story arcs, there was no chance of this phenomenal show ever jumping the shark.

While I'm still reeling over the fact that new Mad Men episodes will never grace my screen again, the show definitely left on a high note.

Even after nearly 10 years on the air, my beloved Stephen Colbert never disappointed with his political satire. Thank goodness we can all tune in for more Colbert fodder when he takes over The Late Show.

Although the Netflix reboot was unable to fully capture the magic of the original series (conflicting schedules tend to have that effect), the first three seasons of Arrested Development were pure gold. Case in point: I've lost count of how many times I have re-watched the entire series, and I have yet to grow bored of it.

Disagree with me if you must, but I needed all 10 seasons of this iconic sitcom. Despite its long run, Friends never failed to deliver the laughs, and many fans still ached for new episodes even after a decade with this gang.

Take heart, Key & Peele fans. There will always be sketches to re-watch, and — in the meantime — we still have Inside Amy Schumer.

Editor's Note: A previous version of this post incorrectly stated that Key & Peele was cancelled by Comedy Central, when in fact, the show's creators decided to end the series after five seasons.