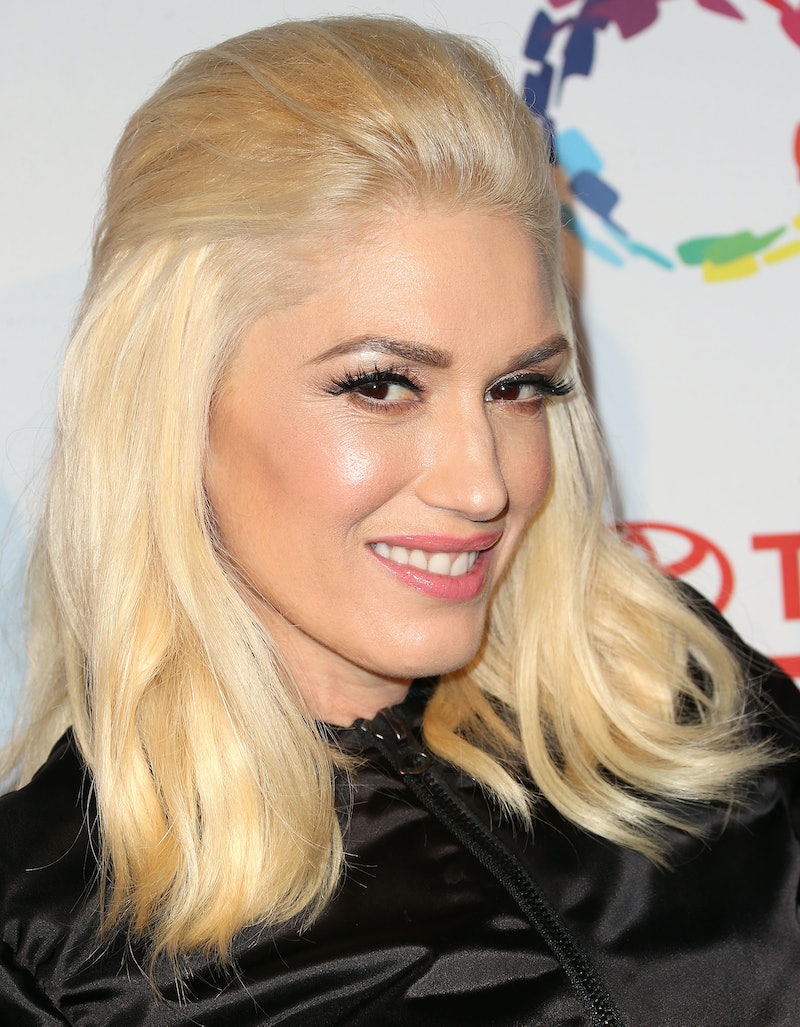 Being that both of them are recently single, it was just a matter of time before Gwen Stefani and Blake Shelton were the subject of dating rumors, but I never thought those rumors would be about dating each other. Yep, word on the street is that, reportedly, Stefani and Shelton are dating these days, after The Voice hosts were spotted attending several Halloween parties together. Allegedly, they were seen holding hands, and there are a few blurry photos from their evening together that could be construed as PDA-y, if you close one eye and squint a little. And to add fuel to the fire, E! has a source who claims that they've been getting "flirty" lately, and that they aren't trying to label their relationship just yet. Wait, is this actually happening? I highly doubt it.

(Update: Stefani's rep confirmed to Us Weekly on Nov. 4 that Stefani and Shelton are dating.)

For starters, the evidence so far — not so solid. OK, so anonymous sources are occasionally pretty legit, but I'm not convinced that this one is. And besides, every supposedly flirty thing that Shelton and Stefani are guilty of could also be seen as something friends who spend a lot of time together do. Until one of them confirms it, I'm not buying it.

In fact, there are actually a lot of reasons that Stefani and Shelton probably aren't dating. I'm totally willing to stand corrected if I'm wrong, but I don't think that's the case.

Their Halloween Night Was A Group Outing

In none of the photos of these two out on October 31 were they actually alone. They were always surrounded by people, and not in any particularly romantic settings, either. They even made an appearance at fellow host Adam Levine's party, which definitely looks like a friend thing.

Their Relationship Has Always Been More Platonic

I've never watched these two in action and thought, "yep, they're totally gonna do it." Stefani and Shelton have always given me way more of a brother/sister vibe than anything else, so it'd be pretty surprising to me if they were actually romantically interested in each other.

Being that her divorce from Gavin Rossdale was finalized, like, five minutes ago, it's obvious that she's just trying to keep busy, because as we are all aware, breakups are hard if you spend enough time alone thinking about them. As she told Carson Daly when she was a guest on his radio show earlier this week, "I was literally that party girl that you hear about when their life blows up and you're like, 'Oh, I'm going out! Watch me!' We're just trying to have fun, you know?" Girl, I totally get it.

Imagine What Their Relationship Could Do To The Voice

The dynamic of the judges is what draws people back season after season, and if Stefani and Shelton were to date and then breakup? That chemistry would be ruined forever! There's way too much at stake here.

Shelton Has Already Shut The Rumors Down

Earlier this month, when rumors first began to surface, the country star took to Twitter to nip them in the bud. There you have it, folks — Stefani and Shelton are not a thing. And if they are, they don't want us to know about it yet, and I'm good with that.

More like this
What Is Ariana Grande's Net Worth? When It Comes To Money, She Has No “Problem”
By Hugh McIntyre
Selena Gomez Is Fine Being Single, But She Still Manifested Romance On 'SNL'
By Martha Sorren, Jake Viswanath and Jack Irvin
Why Sara Pascoe's Husband Is Familiar To Comedy Fans
By Alice Broster
Justin & Hailey Bieber's Bond Is "Unbreakable" Amid His Ramsay Hunt Diagnosis
By Bustle Editors
Get Even More From Bustle — Sign Up For The Newsletter