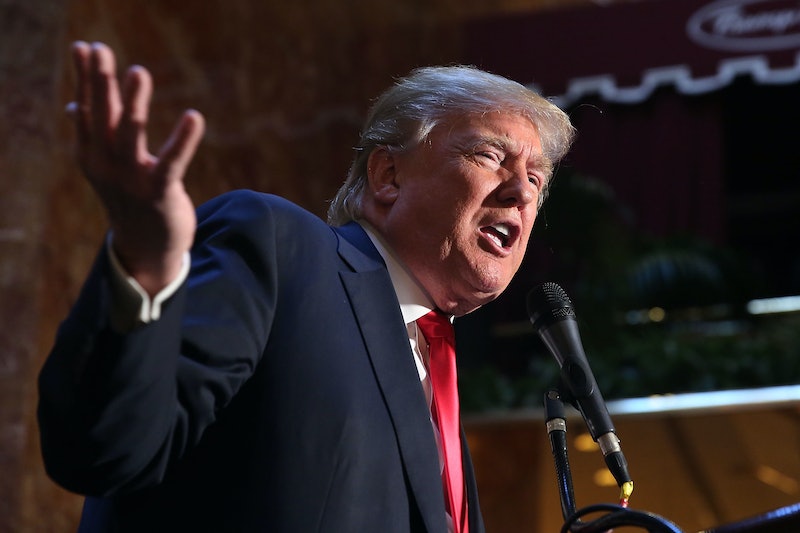 Here we go. You asked for it, America. Real estate tycoon, reality television star, Republican presidential hopeful, and all-around loudmouth Donald Trump will host NBC's Saturday Night Live this Saturday. Unsurprisingly, he's already off to an offensive start. In a promo released Wednesday night, Trump insulted fellow candidate Ben Carson and called him a "loser." Of course, you should watch the show for the jokes, to keep up with the zeitgeist, and to see what outrageous things the host will say. But, while you watch Trump host SNL, know one thing: he's a hater.

I mean that in the strongest sense of the word, not the way we all love to hate the Kardashians. Trump is an individual who has repeatedly, unabashedly commented on the inferiority of women, Hispanics, blacks, immigrants, overweight people, ugly people, and countless others. It may be fun to laugh at his antics, but jokes won't heal the serious offenses Trump has made. And a ton of controversy has surrounded his stint on SNL. First, there are the numerous petitions to remove Trump as host, some of which have garnered hundreds of thousands of signatures. The federal government has even gotten involved as the Congressional Hispanic Caucus officially denounced NBC's decision. Then, there's the social media campaign, #RacismIsntFunny, through which thousands are protesting NBC. Many gathered at 30 Rockefeller Center on Wednesday night to share their feelings in person.

Before we all start laughing along with Trump on Saturday night, let's remember some crucial points. For one, Trump's racist comments directed toward immigrants need to be revisited. He said Mexican immigrants were rapists, killers, criminals, and drug dealers. He stood by that claim and never apologized. Illinois Rep. Luis V. Gutiérrez, a member of the Hispanic Caucus, said SNL's invitation to Trump "is a level of endorsement that says to America that every hateful and racist thing Donald Trump has said since the moment he launched his campaign is acceptable and no big deal."

Then, there's Trump's sexism. The incredible stream of disgusting things this man has said about women makes it truly baffling that he has so much support. I could go on all night, but I'll list a few:

It's certainly not groundbreaking news that the early victories by the women on The Apprentice were, to a very large extent, dependent on their sex appeal.

If Hillary Clinton can't satisfy her husband what makes her think she can satisfy America?

Rosie O'Donnell is disgusting — both inside and out. If you take a look at her, she's a slob. How does she even get on television?"

And in case you're wondering, there's a whole trove of horrible stuff Trump has said about African Americans, Jews, you name it.

But, you know what? Trump doesn't care about any of this. "It doesn't really matter what [the media] write as long as you've got a young and beautiful piece of ass," Trump said in 1991.

Comedy is a wonderful thing. It allows us to build bridges between viewpoints and peoples that otherwise cannot see any commonality. But Trump is not appearing on Saturday Night Live for his love of the comedic arts. It's publicity he wants, not that The Donald needs any. Plus, it's a great way to make voters like you. Case in point: Hillary Clinton herself appeared on SNL's season premiere to prove that she can take a joke. Clinton and Trump, more than any other candidates, receive regular attacks on their character, so it makes sense that they would choose similar stunts to boost their PR.

But there's no room for Trump's brand of sexism and xenophobia in comedy. SNL, often at its best during election season, can be a great tool for exposing absurdities in our political system. Enjoy the show, have a laugh at Trump, or even have one with him. But as you're laughing, keep in the back of your mind: this hater could be our next president. There's nothing funny about that.