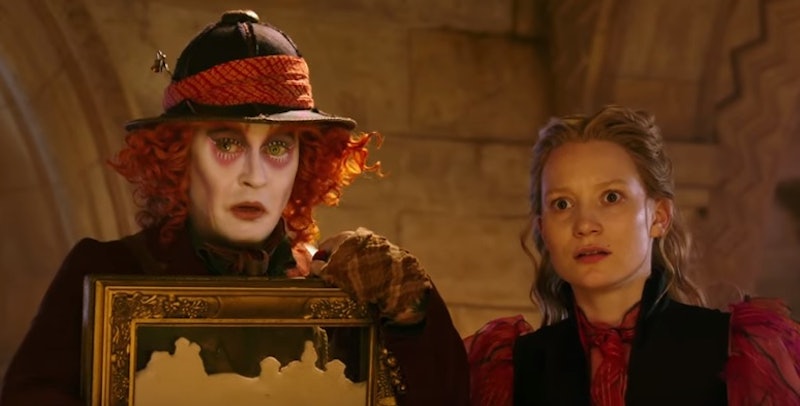 Disney takes you back down the rabbit hole — or through the mirror, rather — in the Alice Through the Looking Glass trailer. Full of riddles, the return of beloved characters, and the ominous ticking of a clock, the story behind Alice's latest journey into Underland swings into sharp focus. While she has been away, time has gone awry in Underland, and no one has suffered more than the Hatter. "Friends cannot be neglected," a voice-over intones as the camera pans over the Hatter standing in what looks like an apocalyptic wasteland. What could possibly have caused such destruction?

My guess is Disney's newest villain Time (played Sacha Baron Cohen), a man with a clockwork head, who is in control of the very fabric of time itself. As villains go, he looks wickedly cool. The entire trailer displays a confidence that bodes well for the film. The CGI is miles better than it was in 2010's Alice in Wonderland, and, while the entire original cast has returned, the focus is squarely on Alice and the Hatter. Time and friendship are worthy themes to build a film around, and the colorful flourishes make the movie as visually appealing as a return to Underland should be.

Dying to know more about Alice Through the Looking Glass ? You are in luck. Here are seven major clues the trailer dropped about the new movie.

1. Alice Has Been Gone For Quite Some Time

At the end of the first movie, Alice was ready to find adventure in the real world. The trailer sneakily avoids revealing anything about what she has been up to while she was away. The only clue is in the colorful outfit she's wearing when she passes through the mirror. It is far more elaborate and vibrant than a typical era-appropriate outfit would be, so perhaps Alice found excitement in reality after all. One thing is certain she has been gone from Underland for too long.

2. At Some Point Underland Becomes A Wasteland

I have a feeling there's a bit of time travel-related trickery going on here. I am almost certain whatever caused the destruction can be prevented by Alice. The real question is whether or not this a vision of the Hatter's future, his past, or is this the chaos Alice is walking into? If it's the latter, then expect an even more unstable Hatter than usual.

3. Alice Is Once Again The Savior

According to the Cheshire Cat, Alice is the only one who can turn back the hands of time. That puts Alice in a position to once again be the savior — and she may even have to redo some of her past triumphs, like slaying the Jabberwocky.

4. The Hatter Is In Danger

The Hatter's safety is central to the plot, but the trailer is not forthcoming about why he in particular is in so much danger. It has been revealed Rhys Ifans will play the Hatter's father, so it is entirely possible it is the Hatter's timeline Alice will be traveling in. The most important part of the Hatter being so pivotal to the plot is it sets up a quest based around the friendship between Alice and the Hatter, which is inherently a great focus for the sequel.

5. The Red Queen & Time Could Be Working Together

A quick scene at the end of the trailer reveals Time offering The Red Queen a gift. If these two are working together then Alice and the Hatter are in serious trouble. Together, they could make for an almost unstoppable team, and I can see The Red Queen realizing the benefits of befriending Time.

The detailing on Time's look is beyond impressive. If you are going to personify time and turn him into a villain, this is how you do it. All of the clock imagery, the passing through the doors, and the ticking give him a sense of omniscience. He feels like a worthy villain for Alice to face off against and because of the fluid nature of time, the stakes are real.

7. Alice Is As Daring As Ever

The best part about the original movie was Alice and her intense curiosity and daring. These things have not changed, and that is the absolute best news to come out of the trailer. Check it out below.

Alice Through the Looking Glass hits theaters May 27, 2016.