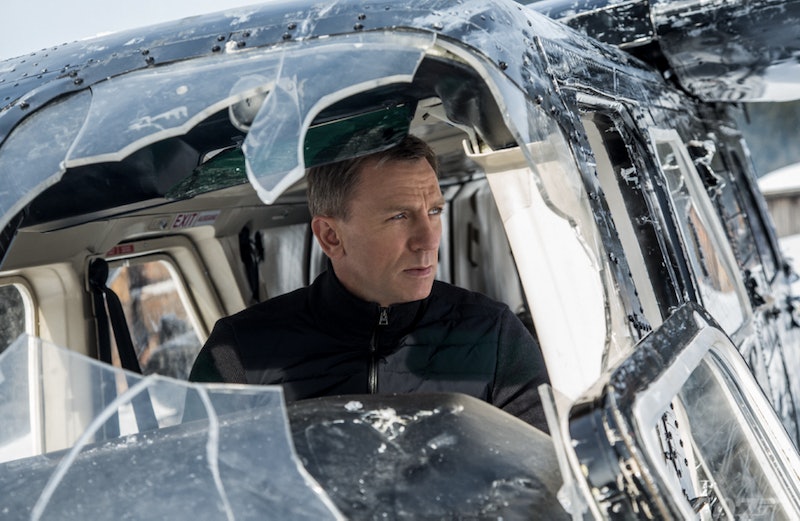 When I was growing up, like so many millennial James Bond fans, I watched 007 movies with my dad and my brother. There was action, there was drama, and almost most importantly, there was that iconic Monty Norman surf rock-inspired "James Bond Theme." But to put it bluntly, there simply weren't many women. For most of my James Bond-viewing life, I've left each film wishing I could be like James Bond, not — as so many men insist that female Bond fans do — be with James Bond. I want to save the day, have clever one-liners, and wield gadgets effortlessly while wearing an impeccable getup. So as the saga of whether or not star Daniel Craig will return to Bond continues post- Spectre , I have to wonder, what if the next James Bond was a woman?

I posed this question to Craig and his response was simple, but encouraging. "Sure, yeah, definitely. I think it’s a great idea. If it works it works," he says. "That’s the great thing about film is it’s all about imagination so of course it could happen. Not that’s it a huge push, it’s just that anything’s possible."

However, this idea of leveling the 007 playing field isn't one that some of Craig's castmates are entirely sure about.

"[I think it's] complete and utter nonsense. I think there should be great parts for women, I do think that. I just think that James Bond is not one of them," says Spectre villain Christoph Waltz. "I think that if a woman would play James Bond, it wouldn’t be James Bond. Can you do it? Of course you can, you can do anything, but does it make sense? Not one bit."

And as studios allegedly bid for the rights to James Bond after Spectre , I know it would be difficult to get any of the bidders on board to gender-swap Ian Fleming's 007 and even more difficult for many longtime fans to accept that a woman could fight and speak and woo the opposite sex in the same way that James Bond has for so many years. But is it really "utter nonsense"?

Part of the fabric of the Bond character is his hubris, and to an extent, his machismo. He knows he's got a way with women and he uses it to his advantage. Bond's got an immense sense of self and often acts with intentions that, perhaps deep down, are from a well-meaning place, but that often exude the Big Man on Campus vibe. But who's to say that a woman can't also embody those characteristics? It would seem that the real impetus is on the Bond fan to accept that a woman can do those things, more than it is on the potential gender-swapped film to prove that fact.

Still, that acceptance may be a bit of an uphill battle, even for the actors in these films. Even one of the women in Spectre, actress Monica Bellucci, isn't sure the swap would work.

But here's the thing about falling back on tradition: It's an excuse that inherently impedes progress. What's more is that it's a rather thin excuse. There was a point at which fans suggested Craig couldn't be Bond because he has blond hair and blue eyes, whereas every Bond before him was a brunette, and I'd argue that Craig has absolutely demolished the notion that Bond can't be blond at this point. What if we tackle the "Bond can't be a woman" suggestion next? Would it change anything beyond the visual, the way Craig traded brunette hair for blond, if a woman were to swap a man's tailored suit for something cut for a woman? Well, no, but the visual might not be the only obstacle.

There are the gender norms that govern each and every Bond film, including Spectre. "He’s a gentleman, he’s actually — this film’s a real [example of] chivalry. He’s going to save my character and he’s going to save also [Lea Seydoux’s] character..." says Bellucci.

OK, so 007 is a gentleman. And if the new Bond was Jane Bond, she would likely need to be saving someone as a part of her mission. In the vein of tradition, she'd either be a woman saving other women (yay for female camaraderie or hell, yay for a romantic LGBT storyline in a mainstream film) or a woman saving a man (hell yeah!). Would it change the pattern of "James Bond meets woman, James Bond saves woman, James Bond beds woman" that so many stalwart Bond fans have grown accustomed to? Not really. What's so wrong with woman meets man, woman saves man, woman beds man, anyway?

Making Bond a woman could challenge many Bond fans in a big way, especially those who view Bond as the age-old "man every man wants to be and man every woman wants to be with." But for the record, while Craig is a wildly attractive guy, desire is obviously not the sole reason many female Bond fans flock to the franchise. We love the action just as much as the next dude. I can't possibly be the only woman who wants to see a woman onscreen kicking ass and taking names, after all, there's a reason Melissa McCarthy's Spy garnered so much attention and why Katniss Everdeen in The Hunger Games is such a hugely important figure for young women. A woman can be the suave spy. She can love and leave a sexy man on her way to saving the world. She can shirk the rules and use her license to kill a little more liberally than Ralph Fiennes' "M" is comfortable with. Fans who cling to tradition just need to be willing to accept that.

And that is where it gets tricky. While it's entirely possible to hand the hero's role over to a woman, history does suggest that it'd be near impossible to find a movie studio willing to put in the work to facilitate such a risky reboot of the beloved 53-year-old franchise. Bond is a slam dunk of a film for a studio — even Quantum of Solace, which was panned by so many critics before its release, bested Casino Royale's box office with over $168 million in ticket sales and was the seventh biggest film worldwide in 2008. If studios need a federal investigation into why their films employ so few female directors, I have little hope for a studio actually gender-swapping a tradition as sizable as Bond.

That being said, no one's going to stop me from writing my own Bond-inspired, female-led, spy thriller on my own. So take that, Hollywood.