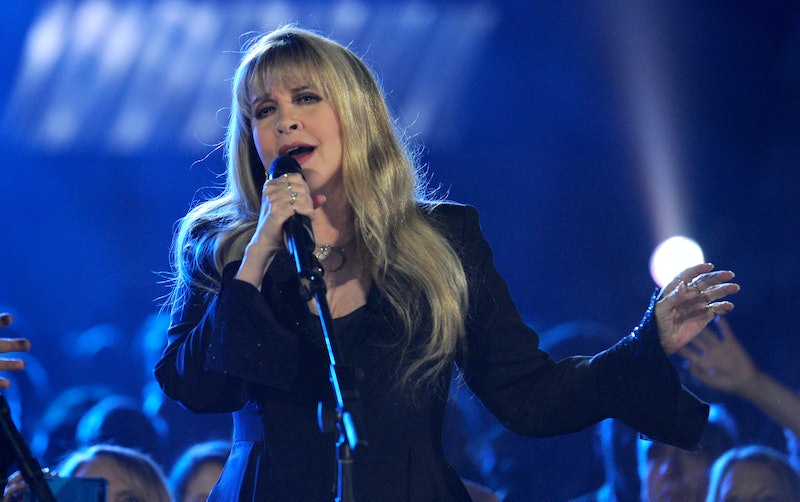 Literal devils made deals and Nan telekinetically forced Patti LuPone to drink bleach, but let’s not bury the lede — Wednesday was all about Stevie Nicks’ guest appearance on American Horror Story. We’ve known for a month or two now that the White Witch would make her way to Coven’s New Orleans at some point. The question wasn’t so much “when?” but “how?” Would she be an international witch, on holiday in The Big Easy only to discover that all things magical had fallen to shit? A creature from the black lagoon who was also somehow a shape-shifter, and assumed the identity of… I don’t know, a social services employee? Would she be Misty’s long-lost swamp mom?

In the end, Stevie just played Stevie in what was probably the best use of Stevie Nicks on a show that has made extensive reference to Stevie Nicks. Remember when Chris Martin showed up on Andy Millman’s hacky BBC sitcom in Extras, like he was “just passing through” the steel mill or plastic factory where everybody worked? And then settled into a performance of “Lights”? Same thing, but with Miss Robichaux’s and a melancholic performance of “Rhiannon” to really drive things home. Maybe Stevie was meant to be a witch in the AHSC universe? Unclear. But shoehorned in or not, we still got a lovely scene-long musical number and the chance to watch Lily Rabe and Stevie Nicks twirl-dance like no one was watching. Treme is off the air for good; SOME New Orleans-set show has to provide us meandering musical interludes.

One of AHSC’s truly fine qualities is the way it never settles in its pursuit of crazy. It would have been easy, for instance, for the creative team to call it a day after “sex crime minotaur” way back in 2013. But to that they added “serial-killing ghost sax player,” “racist head in a box,” “witch hunter hair salon bloodbath,” and so much more. Every time you think this show has reached the glass ceiling of FCC-baiting ridiculousness, it smashes through with an acid-laced magic hammer.

I won’t go so far as to say that “Lance Reddick Satan” tops any of those special gems we just mentioned, but the effort is clearly there. Post-hair salon shootout, Laveau is visited in the middle of the night by a creepy phantom: red eyes peering out from under a feathered top hat; long, cocaine-ready fingernails. His name is “Papa Legba,” but I know him as Baron Samedi from the first Roger Moore Bond, Live and Let Die, which will do nothing to calm my nightmares tonight. Anyway we finally, finally, learn at least a little bit about where Marie Laveau got her eternal life. Along with the price of that reward: babies! I’m sorry, I meant killing babies! Once a year! You can tell that Laveau really doesn’t like doing this so much, which is totally understandable.

Now crashing with the Robichaux witches, Laveau lets Fiona, her new bestie, in on this lifetime of sadness with Papa Legba. While Laveau is describing the absolute horror of this deal, all Fiona can think is “you mean I won’t die?!?” and before long is summoning Legba herself with his traditional five lines of coke. But it turns out to barter one’s soul away you actually need a soul, something Legba assures Fiona she does not possess. Is this the meanest thing you could ever say to someone? Supreme Rulers of the Underworld are not typically known for their tact, but mean is mean.

Fiona, in typical Fiona fashion, takes this setback not as a call to reevaluate her life’s choices and grow in a positive way… but instead to murder everyone she can. And she starts with Nan, who had the misfortune of being near Fiona moments after she’d come to this conclusion. Is this the innocent soul that Legba might want to make a deal? “LOL No!” says Legba, who reminds the assembled murderers that Nan only recently forced a woman to drink bleach. Innocence doesn’t last long on a show like this.

Some quick check-ins on other developing plots:

Fleetwood super fans will know the song that Stevie sung us out on tonight (sample lyrics: “has anyone ever written anything for you?”; “I want you to remember me”) but me, like Fiona — I just took it in, you know? May we all find some peace in our lives, reflecting on the number of people we’ve murdered in pursuit of eternal youth and great quips.