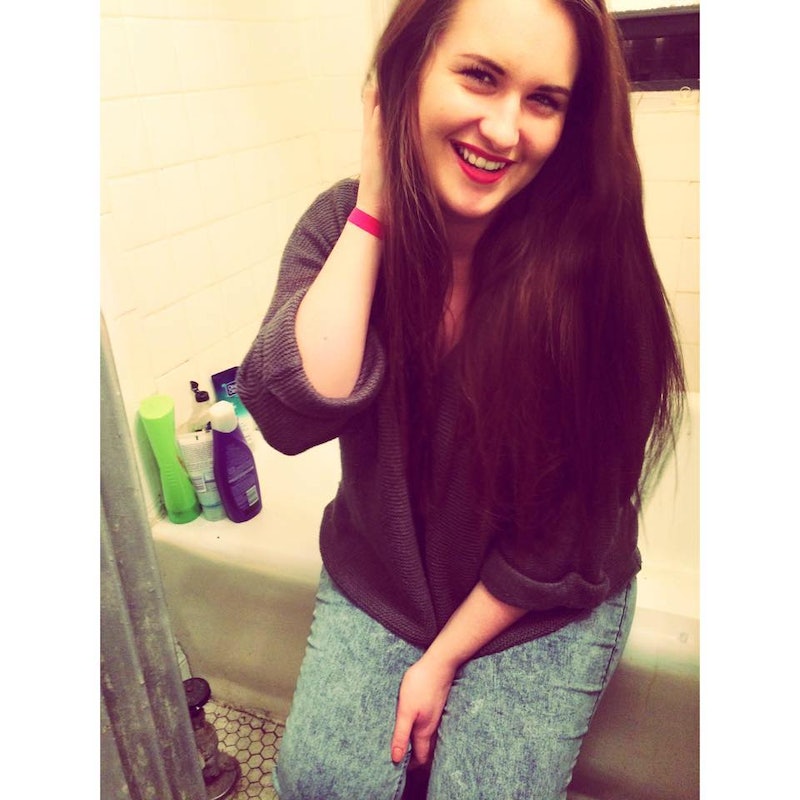 The strategy behind Tinder is simple: You see a few photos of someone, read their bio, decide if you're attracted to him or her, and swipe accordingly. Or at least, that's how you're supposed to use it. Apparently, tons of people have a much more interesting method for getting matches on the popular hookup app.

It's kind of become an open secret that a lot of guys will just swipe right on everyone in order to maximize the number of potential matches, then later go through and unmatch people to "weed out" those they aren't really into. IMHO, this sounds insane and a little counterproductive, but nevertheless, I decided to give this bizarre strategy a try — what's the worst that could happen?

I'll admit, I was a little nervous: As a woman, part of the reason I'm so picky online is because there truly are some jerks out there. It's not fun to subject yourself to the misogynists on dating apps, and I was afraid this experiment would end with me talking to someone totally creepy who would make me feel uncomfortable. But since it was only for a day, I figured it wouldn't be a big deal, and I could just block any unsavory characters when the experiment was over. I thought it would be a good exercise in broadening my horizons, because it's so easy to pigeonhole yourself into talking to the same kind of person over and over. Even if it's just for kicks, it should be fun to break up the monotony and see what happens when you give everyone a chance. And plus, I'm still single, so something clearly isn't working — maybe I just need to shake up my routine?

So here's what happened when I boldly ventured forth into the world of always swiping right (even if it was only for a day).

When I started, I already had 1,031 matches (yeah...I've been on Tinder for a while), so I planned to use that number to figure out how many new matches I got after swiping through 50 lucky (?) men in a row. I have to admit, I was sorely tempted to break the rules and swipe left on a few people who I just knew — whether by their pictures or bios — that I simply would not be compatible with. Also, part of me felt a little guilty: These guys had no idea they were part of this "experiment," and would probably be confused AF when I later unmatched them after chatting. Still, I soldiered on, because the point of this exercise was to take me out of my comfort zone. We're all human, after all, and I was trying to see what would happen when I was less judgmental and opened myself up to the idea of at least being friendly with some interesting strangers, regardless of the sexual context intrinsic to the dating app.

When all was said and done, I wound up with 1,072 matches, meaning that 41 of the 50 guys I swiped right on had liked me back. I was a little surprised, because that's a really good return rate, but again, who knows how many of those guys had been doing the same thing as me, and simply swiping right on everyone?

TBH, being a match with most of the guys I swipe right on isn't exactly a new phenomenon. I don't say this to brag, because I feel like most women have a similar experience with Tinder. Maybe it's because the pool of attractive women is smaller, or maybe it's because guys always swipe right, or maybe it's because my tasteful sideboob shot gives a certain vibe. Whatever the reason, I — like many other women — am used to men competing for my affections online, because there are simply more men than women on dating apps.

So it was no surprise that match after match kept popping up, although it was a little annoying because I couldn't just get into a swiping groove. I had to continually pause to click the "keep playing" button, since I wasn't planning to message any of these guys until they talked to me. And before you bemoan me for being one of "those girls" that waits around for guys to make the first move, you should know that I usually do message first, but wanted to keep things fair for the experiment and didn't feel like saying "hi" to 50 guys at once.

Despite the times when I was sorely tempted to cheat and swipe left "just once," I avoided falling down that slippery slope, and several cringe-filled minutes later, I had about 40 notifications indicating a new match, which was slightly overwhelming.

Most of these, honestly, did not look promising. I felt a little weird, like I was lowering my standards and leading people on despite knowing that I wanted nothing to do with them romantically. For example, a lot of these guys seemed uneducated, or only interested in sex, or like the stereotypical "nice guy" who complains about how he's "so nice" but women just "don't give him a chance." And of course, if I'm being transparent, there were some who I just did not find attractive in the slightest. But for the sake of the experiment, I didn't immediately weed out people I didn't like — I waited for the messages to roll in.

As I was on my swiping spree, message after message kept popping up and interrupting me — I could barely keep up. I decided to ignore the messages until after I was done swiping, and boy, is it a good thing I did. If I had seen the messages I was getting from these characters, I might have bailed on the experiment altogether. My suspicions were correct: A lot of these creepy-seeming guys were just that, and wasted no time in messaging me things like "hey beautiful" or "ur too pretty to be on this app."

I have to admit, this is the part of the experiment where I started to cheat (sorry, guys). After seeing some of these messages, I simply could not bring myself to respond, because I didn't really feel like opening a dialogue with guys who I knew I wouldn't want to converse with. After the guy pictured above started in on his whole "nice guy" rant, I just knew that I couldn't handle getting into an argument with someone who genuinely believes he's entitled to a response from a woman online, so I just blocked him and moved on.

And if I'm being 100 percent honest, there were also messages that I saw and just flat out decided "nope, I will not even pretend to entertain the thought of being interested in this guy" (see below). Although I was breaking my own preset guidelines for this experiment, I think it really goes to show how naive I was to think that things would turn out peachy if I just acted like I was interested in every rando on Tinder. The fact of the matter is that the left-swipe function is there for a reason: To filter the matches you get so you don't have to deal with an influx of messages that you don't want.

All in all, it was a pretty disastrous experiment. Instead of finding a new, unique connection that made me glad I "opened my mind," I was left with exactly what I should have expected: A lot of guys who just weren't my type, whether it was because they had photos of only their abs, couldn't spell properly, or just came across as way too desperate (i.e. calling me babe right off the bat).

Sure, it was fun to try it out, but I think the key differences between the behavior of men and women online have a lot to do with the relative swiping strategies we each use. This is a generalization and I know it doesn't apply to everyone, but I think that men can get away with always swiping right because women are usually less prone to initiating conversation. They accumulate a ton of matches, and then at their leisure, go back through them to get rid of those they aren't really into, and start conversations with those they like. When I swiped right on everyone, however, I immediately subjected myself to a high volume of messages I didn't really want to respond to in the first place, so I ended up getting overwhelmed really quickly.

While I think it's good to keep an open mind with online dating, this experiment taught me if you want to find a quality partner (or even just a hookup buddy), you should never sell yourself short. Save your Likes and Super Likes for people you genuinely want to get to know, and don't waste anyone's time by swiping right just because it's "easier" or "faster" than actually looking through photos. Be confident and go after what you deserve, and who knows — maybe you'll end up finding love on Tinder.

More like this
Hinge's New NFAQ Feature Is Demystifying Queer Dating
By Emma Carey
The Best Time To Date After A Breakup, According To Experts
By Bustle Editors
Are Virgo & Capricorn Compatible In A Relationship?
By Kristine Fellizar
Virgo & Sagittarius Zodiac Compatibility, According To Astrologers
By Kristine Fellizar
Get Even More From Bustle — Sign Up For The Newsletter