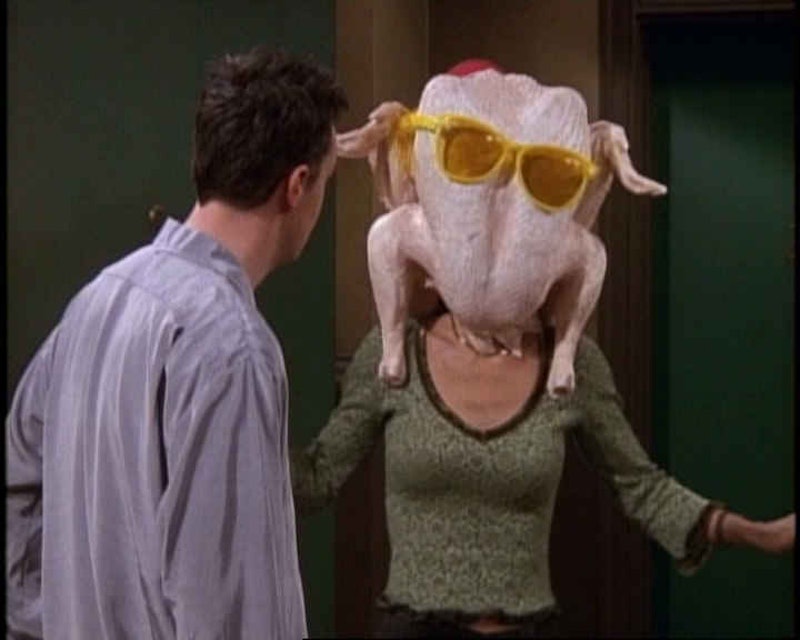 Many of us usually like to think of Thanksgiving as a holiday steeped in tradition, separate from passing trends of the moment. Like a Norman Rockwell painting frozen in time, Thanksgiving is supposed to stand for things that are eternal, like family, gratitude, love, and all that other sentimental stuff — not the momentary crazes that will seem ridiculous next week. But that’s not really how it works, is it? Like everything else, Thanksgiving is a reflection of whenever it’s happening, which will be amply proven this year when everyone is snapchatting their way through Thanksgiving dinner and taking selfies with the turkey. Turkey Day in the '90s was equally a product of its time; instead of live-tweeting the pie eating, your family was calling the Butterball hotline to figure out how hot the turkey was supposed to be because — gasp! — you couldn’t just go on the Internet to check. Guys, it was a crazy, harrowing time to be alive.

As we gear up for Thanksgiving, 2015 style, let's take a moment to remember how we did it back in the day:

1. At some point during the festivities, you’d get angsty and feel like you were the Angela Chase of your family

If you were an adolescent or teenager in the '90s, it was simply a given that you’d be filled with existential angst at least once during the preparation or eating of the meal. You’d retire to your room, turn up the music, and calm down. When you came back out again, your relatives would kindly refrain from mentioning the fact that they just heard you blast “Stupid Girl” twelve times in a row.

Except for the aforementioned angst-fest. Then it was Garbage and Nirvana all the way.

3. You and your family partook of an exciting variety of '90s beverages.

Did you want Crystal Pepsi, or Surge? Or Orbitz?! How to decide? (For adventurous adults, Zima was the obvious choice.)

4. You prepped for the holiday by watching endless Thanksgiving episodes for your favorite shows.

Nineties classics from Boy Meets World to Dawson’s Creek had Thanksgiving themed episodes. You could usually bet that, at some point in the episode, cooking preparations would go terribly wrong, people would get really mad, and then everyone would suddenly realize that they have SO MUCH to be thankful for. OR characters would volunteer at a soup kitchen and then realize that they have lots to be thankful for.

IMHO, the Best Thanksgiving Episode Award has to go to that time Monica cut off Chandler’s toe while trying to seduce him with elbow macaroni.

5. You watched the Macy’s Thanksgiving Day Parade to check out the new Sonic float.

1993 was a particularly notable (and destructive) year for the parade. Heavy winds sent the new Sonic the Hedgehog balloon into a light pole, causing Sonic to collapse. The sad, deflated video game hero then proceeded to knock over a lamppost, injuring a child and a police officer.

6. You also tuned into the parade to watch your favorite bands lip sync their ways through the most glorious hits of the day.

NOTE THE DANCING M&MS. The little blue fella at 1:15 is officially the saddest M&M of all time.

7. You or someone you know decided to deep-fry a turkey. It did NOT go well.

In 1996, Martha Stewart Living introduced us to the deep fried turkey, and with support by Alton Brown and other Food Network stars, the deep fried bird became a national obsession. Although the passion for frying turkeys has died down since then, many people still attempt it, with hazardous results. It turns out that deep-frying a 20-pound ball of meat is hella dangerous! Who could have guessed? The National Fire Protection Association estimates that deep-fryer fires destroy 900 homes, cause $15 million in property damage, injure 60 people, and kill 5 every year. As of 2013, Texas (my home state) had more grease and cooking related insurance claims on Thanksgiving Day than any other state in the country.

Other turkey innovations of the '90s included brining turkey and Tofurkey. Less glamorous than a deep fried turkey, to be sure, but also less likely to burn down your house.

8. During dinner, someone would inevitably start talking inappropriately about politics, because it was Thanksgiving, so of course.

Regardless of the year, Thanksgiving dinner is always defined by someone deciding to talk about politics or religion at the table. A big debate ensues, and everyone gets pissed off until they are distracted by pie. The '90s was no exception — the only differences between then and now were the topics of unwelcome discussion. Hot button issues that a parent or relative would have the clumsiness to bring up while they were passing the potatoes included: Rodney King and the L.A. riots; the 1992 or 1996 presidential election; the Clinton/ Lewinsky scandal; that time Sinead O’Connor ripped up a picture of the pope on live TV. You know that this year the same thing will happen, only it’ll be about Obamacare or gun control or Donald Trump. Have we learned NOTHING?

9. After the big meal, your whole family would settle in to watch a TV show or miniseries ON TAPE.

At least in my family, holidays were an opportunity to binge watch our favorite shows and miniseries. Doing so was kind of a big deal because, before the days of streaming video, we had to actually buy that sh*t, and it was expensive. So we’d invest in our favorites, and then watch them over and over. For pretty much the entire second half of the '90s, our go-to holiday watch-a-thon was ruled by the BBC version of Pride and Prejudice.

10. You spent way too much time trying to figure out if it is actually possible to fit your head in a turkey.

And if you do get it on your head, how to you get it off?