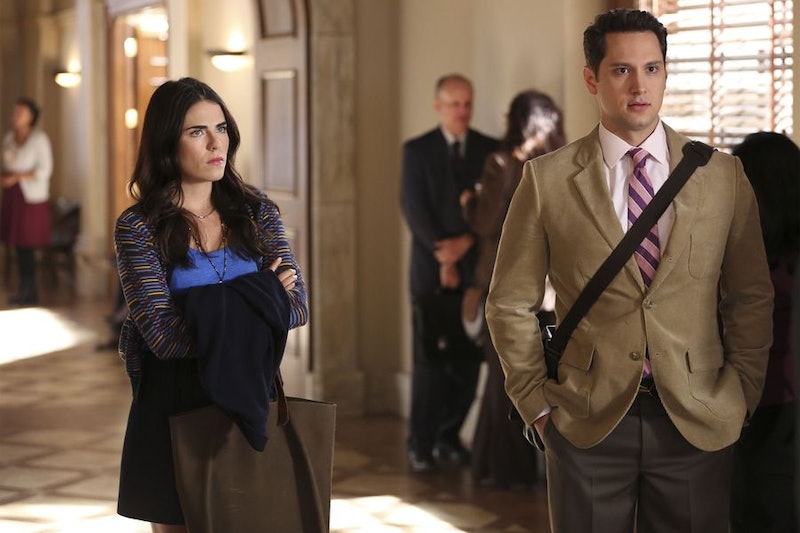 Everyone on How to Get Away with Murder has a past, but Asher's past at Trotter Lake has been at the forefront of HTGAWM Season 2. Up until now, Asher has seemed to be the aloof student who has no idea what is going on around him (aka a heck of a lot of murders). Well, Asher still doesn't know what's happening around him, but we've learned in recent episodes that Asher might have been involved in a gang rape when he was younger. The details are still hazy, but Emily revealed to Bonnie in "Two Birds, One Millstone" that a girl named Tiffany had been gang raped at Trotter Lake, which is the secret location Asher has been trying to cover up since the beginning of the season.

But, how involved was Asher at Trotter Lake, or was he even involved at all? We should probably get it out of the way and say that it seems that Asher has been working his tail off to cover up the rape. So, whether he was simply present, participating, or halfway across the country when the rape occurred, it's not OK that he's covering something up that violated a young woman. There's a good chance that his passivity will come into play while the secrets of Trotter Lake get ironed out, but there's also a chance that Asher is trying to cover up something that he personally took part in.

I've never looked at Asher as a bad egg. But as his dark past has slowly been revealed this season, it's becoming more and more obvious that I don't know anything about anyone on this show. The idea that Asher is willing to turn in someone for a murder they didn't commit just to keep his own hands clean makes me think that he's in deep with this Trotter Lake situation.

There are a few ways Asher could be involved in Trotter Lake. He could have been an active participant in the gang rape. I'd like to think Asher wouldn't do that. His reaction to Bonnie's molestation past really seemed to shake him up — as it should — so hopefully he would never participate in raping a young woman. It is a possibility, though.

I feel like Asher's involvement will turn out to be that he was present, but didn't stop it. It seems most in line with the show, as it will tackle how allowing something to happen without stopping it is just as much of a problem as actively participating. If this is the case, it will certainly be interesting to see how the show handles it. Obviously, whether Asher participated or just was present at Trotter Lake when others raped Tiffany, his covering it up is no good.

Overall, as the pieces are put together, Asher might find himself reliving the guilt of Trotter Lake. It could explain his visit to the police station in the flash forward sequence. Perhaps, after all the covering up, he's finally ready to tell the truth.