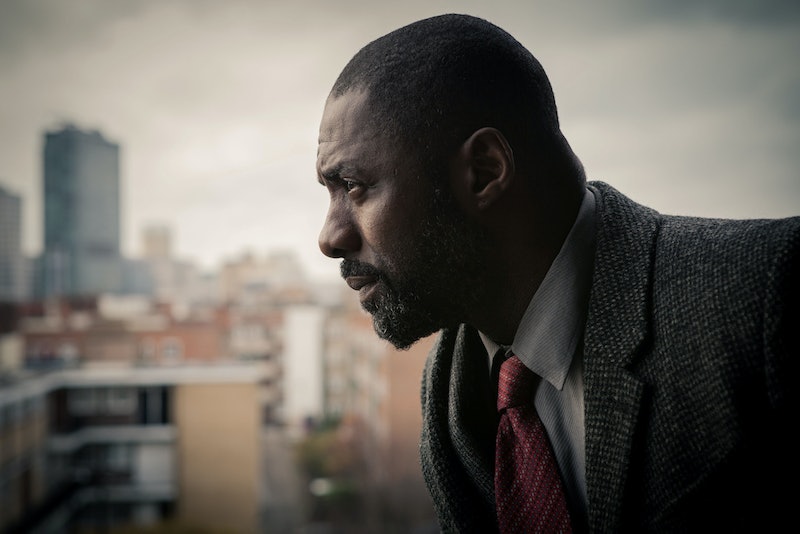 Not even a twisted happy ending with his serial killer love Alice could keep Luther from returning to his work as the smartest detective in London. BBC America announced Luther Season 4 will be a three-hour special that will air Thursday, December 17. Instead of airing the episodes in three parts — like an actual season — fans of Luther can settle in for a one night event of intense action as Luther comes out of retirement to hunt down a cannibalistic serial killer. I am certain that will be as gruesome as it sounds. The special will introduce new characters of the non-lethal variety into Luther's world as well, including Rose Leslie as Emma Jones.

This super-sized event isn't quite a fourth season considering it's now a special, but it is more than enough Luther to get any fan's blood pumping. The show has always been fueled by Luther's slow-simmering rage, and his latest adversary is his most twisted one yet. The special has a lot to live up to considering how flawless the Season 3 finale was, with the biggest question being, why is Luther coming back to work another case? After losing his best friend, it seemed Luther was ready to leave police work behind and start a new life — with Alice by his side.

Questions about Luther's motives aside, there are a few things this special absolutely needs to include. My list of demands are short, but mighty:

I know Ruth Wilson is busy with The Affair and there is nary a mention of her in the special's description, but my Luther/Alice 'shipping heart just wants one tiny scene. If I can't have an Alice cameo, then I will settle for her not being dead. Honestly, I don't think Luther can get any sadder and still exist as a person.

Luther Glowering At The Camera

The man glowers so good it hurts. I need him to be angry, intense, and ready to dangle some people out of windows. That is the Luther way.

In my head, Luther's adversaries fall into two categories: Alice and Not Alice. I want this bad guy to be a memorable one. The fact that he, you know, eats people pretty much guarantees he will be, though — there is a chance for Luther to go all Silence of the Lambs with this story and I am OK with that.

Leslie is amazing in everything she does. From Downton Abbey to Game of Thrones, Leslie has always made a lasting impression. I cannot wait to see her interacting with Idris Elba. If she becomes Luther's new partner then a thousand points to Gryffindor because that would be the best news ever.

I would never want Luther to lose his edge (I don't think that's even possible), but the man has been through so much, he deserves a win. After losing his wife, Justin, and the respect of his colleagues, Luther felt defeated. Despite his unorthodox methods, he is a passionate detective and he is brilliant at solving crimes. I hope this is the story of how he gets his groove back.

A Renewed Love For His Job

It's unclear how much time has passed since Season 3, but the special will introduce new colleagues for Luther and draw him back into the police world. It has to be hard to love a job that has taken so much from him, but Luther is the antihero the streets of East London need. He's just not Luther without his work. In that spirit, I hope he can throw himself back into work and actually gain some sort of satisfaction from what he does.

Elba's intensity level as Luther hovers around a billion. It's one of the few shows that can make me hyperventilate. I want this three-hour special to terrify me and put me on the edge of my seat (literally). The special has what sounds like the creepiest bad guy of the series so far, and I have high hopes Luther's cat and mouse game with him will take this special to a whole new level, action wise.

Remember, Luther's big one night event airs December 17 on BBC America. If you miss it, Luther will cry one, perfect single tear for you.