The case for space has been made: The White House has given NASA permission to continue operations with the $100 billion International Space Station until at least 2024, the space agency said Wednesday. The gigantic satellite was planned to splash into the Pacific in 2020, but has been awarded four more years by the Obama administration so that it'll be around to kick off the beginnings of the commercial space industry.

The White House decision is seen as a move to not only reassert the American presence in orbit, but one that will boost commercial interest in space. Plus, NASA gets more time to get things ready for their upcoming human mission to Mars, which is expected within 20 years.

The space station could be operable all the way until 2028, as long as it can secure funding — currently around $3 billion a year — and "a bit of luck." With the predicted boom of "space tourism," defined as zooming off into the stars for kicks with a very expensive price tag, other companies could partner up with NASA in years to come to secure funding.

"If we as a species are going to get off the Earth ... and we want to push out beyond low-Earth orbit, we're going to have to use this small foothold called the International Space Station to go do that," chief of space operations at NASA Headquarters Bill Gerstenmaier said. "This is our only opportunity to really move forward."

NASA is keen to send a human to an asteroid by 2025, and to Mars in the 2030s. The space station is critical to those goals because it offers the space agency information about how a long-term mission affects the body. As we reported:

Not to state the obvious… but the human body has evolved, from scratch, to adapt to Earth. The long-term effects of spaceflight are still unknown, but we know that eventually, the skeleton will probably start deteriorating and muscles will start to atrophy. The heart slows, the immune system weakens, and your body basically screams to be taken back to Earth. This might be OK for short-term spaceflights, but long-term plans to leave Earth are going to leave your body looking like those creepy dead pirates in Pirates Of The Caribbean. So…just keep that in mind.

Other commercial companies are pretty interested in using the space station, too. SpaceX is looking to be a leader in "space tourism," with a $3.5 billion contract with the station and its own plans to develop commercial spacecraft. Orbital Sciences Corporation holds a similar contract with the International Space Station, and they're planning on a test launch of their rocket and cargo ship Thursday from Wallops Island, Va. after a solar flare caused a delay.

The International Space Station is not just an American vessel. It's is the product of international co-operation: it came about from a 15-nation collaboration, and at the moment 68 nations use it for various purposes. Unfortunately, the European Space Agency and the Japanese Aerospace Exploration Agency aren't yet on board with the White House plan, which means the the already-strapped NASA might wind up splitting operational costs with Russia's Roscosmos after 2020.

Even though chances are good the two agencies will agree — NASA is waiting on their governments' approvals — America is prepared to go it alone, NASA's chief of operations has declared. With Russia.

"We're prepared to do what we have to do if the partners choose to take a different path," said Gerstenmaier. "I fully intend our partners to see the benefit, and they will be there with us in the future. (But) we're prepared, if we have to, to do this with Russia (alone)."

Take a flight around the space station. 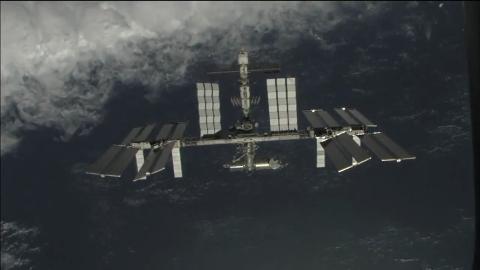