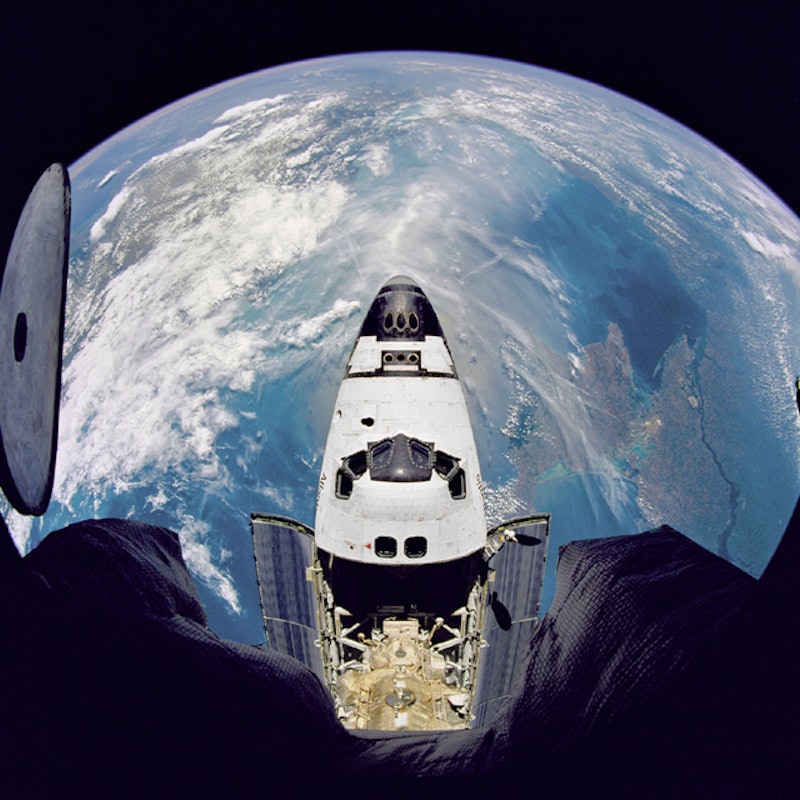 It's confirmed: We're in the future. The bizarre rise of "space tourism" has opened the gate for a bunch of wannabe-Buzz Lightyear start-ups, and the latest, World View Enterprises, promises to take you to the outskirts of space ... in a balloon. Not quite a hot-air balloon, but close: for $75,000, a fraction of the cost of a seat on Richard Branson's upcoming Virgin Galactic spacecraft, you can take a high-altitude balloon to Earth's atmosphere. Think of it like Sandra Bullock in Gravity, only without spiraling abruptly into outer space. At least, one hopes.

So, how does it work? Well, the World View balloon is classed by the Federal Aviation Authority as a "space vehicle," because it's built to withstand the pressures of outer space, but it probably won't get that far. It intends to fly you just 30 kilometers away from our humble planet, and outer space doesn't technically start for 100 miles past Earth — so you'll kinda just be hanging there. But what a hang it'll be.

"Seeing the Earth hanging in the ink-black void of space will help people realize our connection to our home planet and to the universe around us," insists World View's spokesperson, "and will surely offer a transformative experience to our customers." Or, you know, you could go and see Gravity in IMAX. (Bones and muscles start to atrophy shortly after one leave Earth's atmosphere, so you probably won't be allowed to take popcorn in the balloon.)

World View hopes to kick things off by 2016, and will seat eight people per balloon. “In essence, we’re a spacecraft," co-founder Taber MacCallum told the Washington Post. "In fact, we’re a spacecraft." We're pretty concerned that he doesn't seem sure, considering what Gravity taught us about spaceflight gone awry...

Still, World View's project is tame compared to some: Dutch start-up ‘Mars One’ plans to send a bunch of humans to live on Mars in 2023. (Oh, and broadcast the whole thing on satellite television.) Russian company Orbital Technologies is set to open a space hotel in Earth’s atmosphere by 2016, and two Democratic lawmakers recently pushed legislation that would put a national park on the moon. Plus, the World View balloon is the cheapest space-flight to date: a seat on all other intended spacecrafts starts at about $200,000.

Start counting those pennies ... except, what will they be worth in space? Well, PayPal's on it: they've has already launched an initiative to figure out how the hell we'll pay for things on the moon, and the FAA estimates that, by 2020, "space tourism" will be a multi-billion-dollar industry. Sociologists are already arguing about the ethical repercussions of inventing an entire industry only available to the super-rich, though some critics have rebutted that airplanes were once intended for the same demographic. Now that they're accessible to almost everyone, Richard Branson's clearly gotten bored and declared himself the king of all flying travel ever.

Or, you know, it might just be this all over again. We're just sayin'...

More like this
Read Dan Levy's Heartbreaking Message After The Club Q Shooting
By Stephanie Topacio Long
Iran Has Issued A Death Sentence Over Mahsa Amini Protests
By Catharina Cheung, Darshita Goyal and Maxine Harrison
Joe Lycett Just Took HIs David Beckham Qatar Protest To A Whole New Level
By Sophie McEvoy
The 8 Best Walking Shoes For Metatarsalgia, According To A Podiatrist
By Lauren Moison
Get Even More From Bustle — Sign Up For The Newsletter