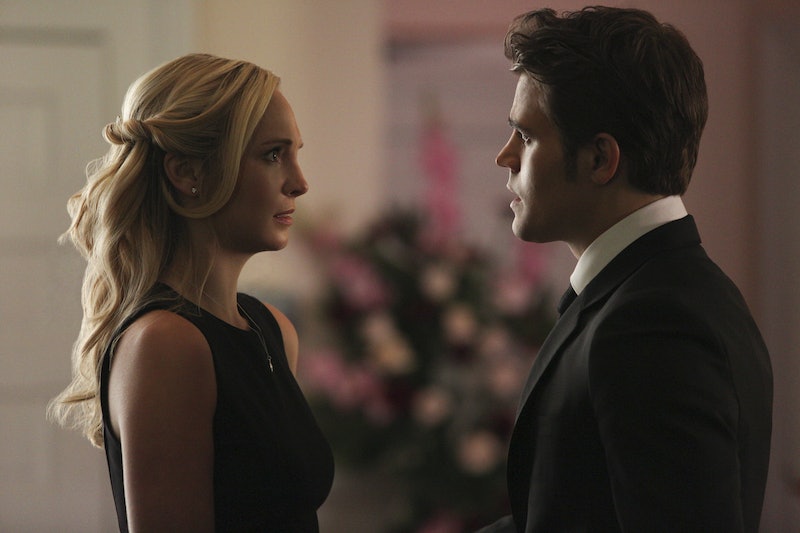 While most of the most beloved characters on The Vampire Diaries have at one point or another gotten together (read: aggressively made out), there’s nothing we fans hold dearer than a select few romances. One of them being, of course, Steroline (aka Stefan and Caroline). Which is why when I learned during a flash forward in the second episode of Season 7, that the two don't end up together, I let out a weep that was alarmingly loud and enthusiastic. (And yes, I'm secure enough to admit that. This is a safe space, right?) Anyway, the question that's been plaguing me since that revelation — besides how Caroline ended up in the field of broadcast journalism — is the why and the what behind it all. As in, why did Caroline and Stefan break up? And better yet, what could he have done that was so terrible? (If you do remember, Caroline told her assistant that she never wants to hear the name Stefan Salvatore again. *shudders*)

As you're left ruminating on that question with me — because we are only mere mortals and we ruminate over these things — I have a better one: What are we going to do to get to the bottom of this? According to TVLine, executive producer Caroline Dries says there's a lot more going on here than what meets the eye re: the Steroline breakup. She even hinted that there's a "legit" reason for the duo's romantic demise. Also, this: "It’s beyond petty jealousy or Stefan cheating on Caroline or anything like that." OK, Dries. That doesn't rule out much. You've left me no choice but to speculate. Here are my theories:

1. The Valerie Drama Was Too Much

Between her being an enemy and hating Caroline's guts but being potentially still being in love with Stefan, the triangle is too much for Caroline to handle. Caroline feels like she's always the "other girl" and just can't anymore. She literally just can't even, Stefan.

2. Caroline's Not Down With Being A Step Mom

Hear me out. Maybe Stefan's son isn't actually dead? (Never say never, when it comes to death in TVD). Perhaps she feels that any son of Valerie's, especially one that comes back from the dead, would bring some negative vibes into her life. Namaste, Caroline.

3. Stefan Takes Sides With The Heretics

What if Caroline gives Stefan the cold shoulder because of the Valerie thing, and then Stefan reads it as her being over him, so he turns off his humanity, and joins the heretics? Sounds unforgivable, honestly. (Also, classic Stefan, am I right?)

4. Stefan Gets Caroline Pregnant And Abandons Her Too

They fall even more truly, madly, deeply in love, play Savage Garden, make a vampire baby (vampires can't make babies, I know, but have you seen the sh*t Bonnie has pulled? She could magic something up), and then Stefan abandons her. That would really sting.

5. Elena Comes Back And Stefan Falls For Her Again

Honestly, never give up hope. I know it's the unpopular opinion, but I will hold out for Stelena until Caroline Dries knocks on my door herself and tells me it's never going to happen.

True or false: I'm too emotionally invested in this?