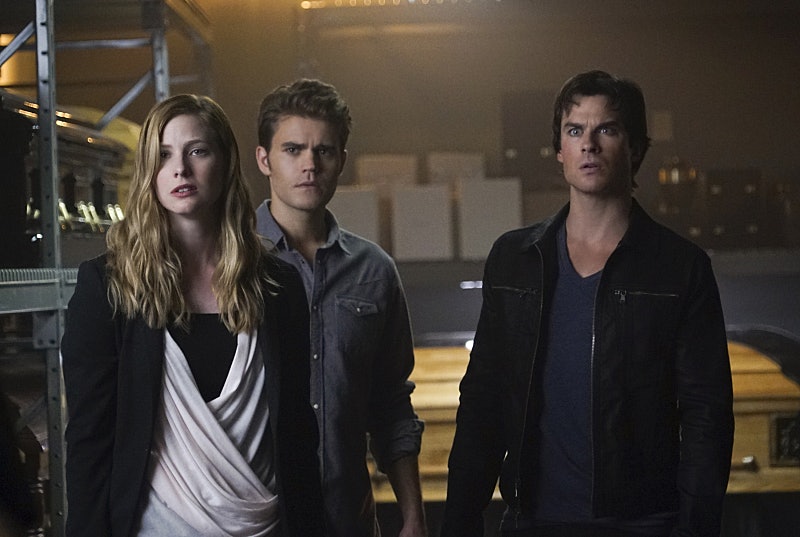 They always say that mother knows best, but in the case of Lily Salvatore, I'd say she may be the ultimate exception to that rule. Seriously, this woman does not know the first thing about being a good parent, even in regards to her Heretic family. Not only did we learn that she is the one responsible for Elena's 60-year slumber (apparently she gave Kai the idea for the sleeping spell), but she's also obsessed with bringing her "one true love" back from the dead, no matter who ends up getting hurt in the process. And thanks to Thursday night's Vampire Diaries episode "Live Through This," she was finally able to see her dream come to fruition. Using the Phoenix Stone, Lily brought Julian back from the dead on TVD , but their reunion is far from getting a happily ever after, especially now that Damon and Stefan have every intention of killing Julian once and for all, though for very different reasons.

Damon wants Julians dead because he knows just how much it will destroy his mother — much like how losing Elena destroyed all of them. He wants Lily to get a taste of what true happiness feels like, so that he can rip it away from her and make her suffer the way he's been suffering. (There's that bad boy Damon we know and love!) Stefan's reasoning, on the other hand, is a bit more noble in nature. He's not in this fight to hurt his mother, he just wants to see Julian dead for everything that he did to Valerie, which includes murdering their unborn child.

So I hope that Lily enjoys this little romantic rendezvous of hers while she can because she's just made two huge enemies out of her own flesh and blood. And I think we can all agree that when Damon and Stefan team up together, there's nothing that they can't accomplish. And let's not forget that aside from being vampires, they also have a powerful witch (Bonnie) and Heretic (Valerie) on their side, which will certainly help to tip the scales in their favor. Lily may have won this particular battle, but something tells me she's about to lose the war.