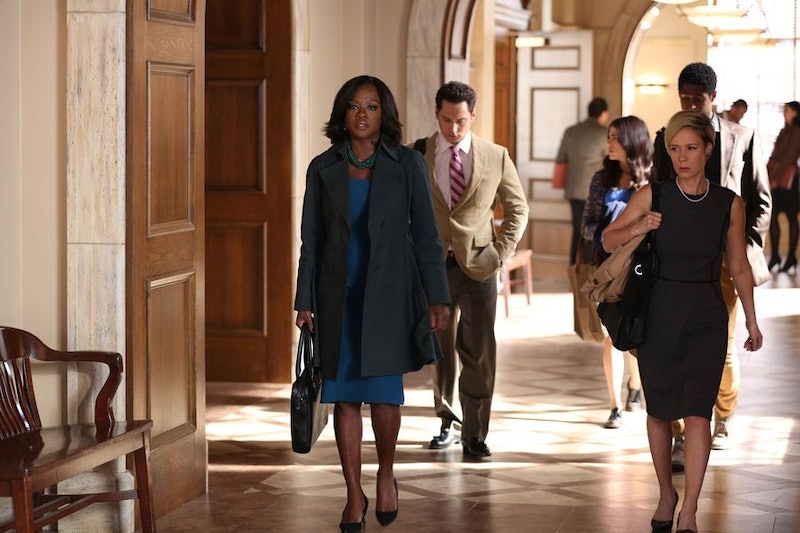 After being burned before by false predictions on How to Get Away with Murder , I've learned my lesson. You can't take anything at face value on this show, because nothing is as it seems. Except, maybe this is the exception. On Thursday's episode, it appears that Bonnie kills Emily by pushing her off the roof at the Hapstall house. Like, it really seems like Bonnie kills her. But, after digesting that scene and thinking about it, now I'm not so sure Bonnie killed Emily on How to Get Away with Murder, because something was missing. A scream.

Let's walk through this. In the final moments of the episode — obvi — Connor and Michaela are running from the Hapstall house when Wes and Laurel stop them from the balcony. That's where Emily falls to her death from the roof, and when Connor looks up, he sees Bonnie standing from where Emily (probably) fell. Minutes before, Bonnie was telling Annalise that she wanted her to die, and we know that Bonnie has killed before, so it's not completely out of the realm of possibilities.

But, Emily didn't scream. If Emily were shoved off the roof by Bonnie, you'd think that she would scream or there would be some reaction to her falling to her death. Instead, it was silent. Uncomfortably silent, actually. That makes me think that maybe Bonnie wasn't actually on the roof to kill Emily. Maybe she was up there to save her. And maybe Emily jumped at her own device.

Why Emily would kill herself is beyond me, but we don't know everything about her yet. We know that Annalise is constantly going head-to-head with her, so maybe something happens in a case that causes her to jump. Or, perhaps Emily is the one that shot Annalise, and the guilt was so bad, she couldn't take it. Either way, jumping by choice would explain why there was no scream, versus being shoved off the roof.

The only real motive Bonnie would have to shove Emily off the roof is to protect Annalise. News flash, I don't think Bonnie is too worried about protecting Annalise at this time. Bonnie just told her that she wants Annalise to die. So, while Annalise may like to believe that Bonnie would do anything for her, I think Bonnie has a different agenda, and this time I don't think killing someone is on it.