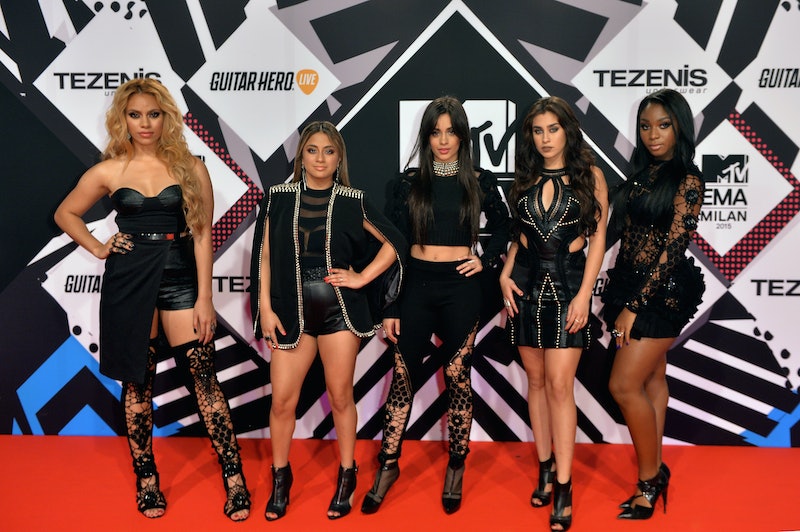 We recently learned that pop supergroup Fifth Harmony began recording their new album (which they've dubbed "5H2" for the time being) at the end of September. According to SPIN, the five young women have already hit the studio with big-name hit-makers like Max Martin and Stargate, and now, we can add another impressive collaborator to the list: Meghan Trainor. Yes, in a new interview with Billboard, Trainor revealed she's writing songs for 5H's upcoming LP. One new track is called... wait for it... "Tinderella." Sigh. Really? A reference to the hottest dating app of the moment? I know the "All About That Bass" singer can do better than that.

Trainor wrote two of the catchiest tunes on Fifth Harmony's debut album, Reflection — "Sledgehammer" and "Brave Honest Beautiful" — so I'm not opposed to her contributing to their sophomore effort. However, member Dinah Jane Hansen recently told SPIN that the band is heading in a much more "mature," meaningful direction on 5H2, and "Tinderella" just screams gimmicky to me. The song's title (and probably its lyrics, as well) would make it seem dated in just a couple of years (or however long it takes for Tinder's popularity to dwindle). Head on over to Billboard to hear Trainor's comments.

The fact is, Fifth Harmony should no longer be recording disposable, gimmicky pop songs. Reflection was a strong debut, but now, they need to take things to the next level. Fortunately, it sounds as though they're up to the task. Describing the group's new project to SPIN, Hansen said:

It’s a side of Fifth Harmony that no one’s really seen. In the beginning, we were super happy. Our first album was very jumpy. This time, we’re showing who Fifth Harmony really is behind closed doors. ... We’re writing [about] our own experiences about love and everything, stuff that’s actually what’s going on right now. We’re all 18, 19, 22, so a lot is going on in our lives. ... We’ve all experienced breakups and love this year. I feel like sometimes we just need to speak more about what we’re going through.

Hear, hear! Luckily, Trainor said she didn't know if "Tinderella" would end up making the final 5H2 track list. Phew. Let's hope she has other songs to bring to the table.