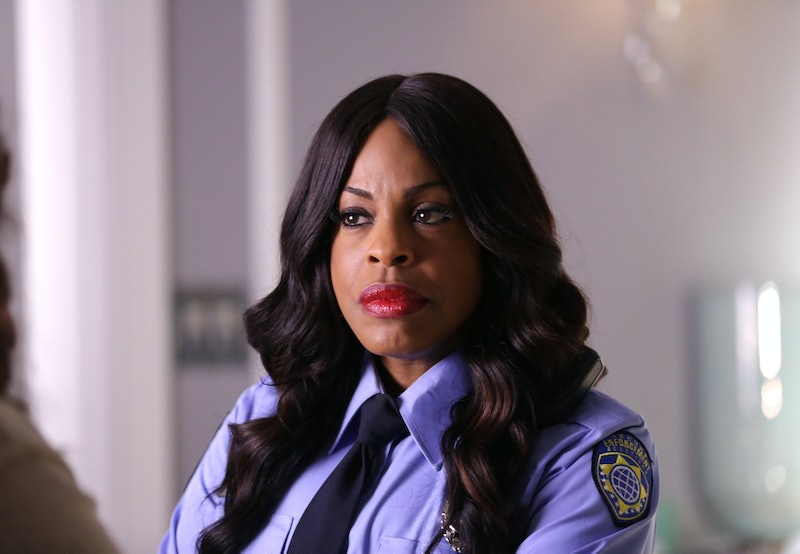 I've seen enough crime shows to know that sometimes a killer — or unsub (if you will) — tends to insert themselves into the investigation of the crimes they've committed. Well, I'm pretty positive that that is the exact situation for one Denise Hemphill on Scream Queens , aka the Red Devil. Or one of the Red Devils. Yes, super sleuth Denise Hemphill is up to something on the show, and it might just be killing a whole bunch of people. Not only would Denise make a shocking killer, but there's plenty of reasons that prove she is guilty of the crimes.

Denise may come off as the comic relief of the show, but she's way more than that. Ever wonder how come such a terrible security guard is supposed to patrol a sorority house from a masked killer? Yet, when the masked killer comes around with a chainsaw she is never there? Denise Hemphill, apologies for your friend who is in the Best Buy parking lot in the sky, but you're looking guiltier and guiltier every single day. My guess is if we went on your Twitter, Denise, you'd be tweeting Shonda Rhimes a ton of How to Get Away with Murder theories.

Here's why Denise Hemphill is probably one of the Red Devils.

She Wanted To Join Kappa Back In The Day

Denise wanted to be a Kappa pledge when she was in college, but the women didn't let her join. Denise could be holding a grudge against the house and be terrorizing them alongside Gigi to get back at their injustice against her years ago.

She Was Personally Hired By Gigi

We learned Gigi was involved with the Red Devil after she visited the lair to try and "rescue" Zayday. While there, Denise was a mess of a "security guard" and tased Gigi, which might explain why Gigi was so mad with the Red Devil's performance later on at their meet-up.

She Can Divert Suspicion Away From Herself

Denise has been doing her own "investigation" while on campus, but all of her suspects seem innocent. Either she is trying to divert attention away from herself or...

She's Actually The Worst Security Ever

Denise might just be a really really terrible security guard, but something tells me it's all for show. Denise could be putting up a facade of the incapable security guard who never shows up to the crime scene until after the Red Devil leaves (which is very suspicious).

"Super sleuth" Denise Hemphill, I've got my eye on you.