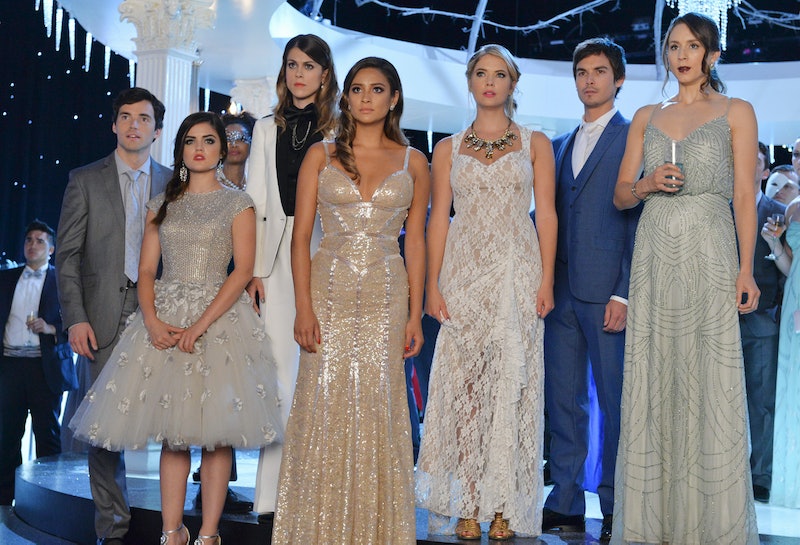 Pretty Little Liars loves a good festively themed episode, but, until the Christmas Special (How The 'A' Stole Christmas), their main wealth of festive cheer revolved around the costumed, spooky fun of Halloween (I don't care what anyone says, you can definitely have festive cheer for Halloween). Although PLL definitely does creepy super well, the episode gave the show a chance to blend darkness with true Christmas joy (and it also gave us all an opportunity to enjoy several characters in sexy Santa get-ups. Merry Christmas, indeed!). It was also the perfect scene for utilizing some dark references to A Christmas Carol, and for reminding us all that A never takes a holiday.

It'd be easy to become so distracted by all the dazzle of the Winter Ball, the twinkle of the Christmas lights, and the sight of Ezra wearing nothing but a big festive grin and a pair of tiny Santa shorts to not notice some of the more minor details of the episode, but it's okay, you guys; I've got it covered. From Hanna being her usual wonderfully scatterbrained self to valuable clues, the Christmas Special of PLL was packed full of details which you maybe didn't notice the first time round.

1. Mona Is Reflected In The Eye Of The Title Credits

Considering the revelation that (Spoiler alert!) Mona was the one who accidentally killed Bethany Young, this is some pretty great foreshadowing buried within the credit sequence.

2. The DiLaurentis Ice Ball Is A Benefit For Homeless People

Let's not forget that Mona also once did community service serving food to the homeless, and that Hanna and Emily spoke to a homeless-looking character earlier in this season. There are very few shows which incorporate homelessness into their story, so kudos to PLL for keeping it real.

Seriously, when I write out my will for my loved ones to find, it's going to be written in beautiful cursive and with the sort of platitudes that would make Sylvia Plath embarrassed of its poetics. Mona barely even tried with this note!

4. Speaking Of Which, Mona And Bethany Have Eerily Similar Handwriting

Suspiciously so. Either that or the educational system of Rosewood needs to up its handwriting game.

5. That Santa Is Super Shady

So, Aria makes contact with the Santa on the street and gives him her Christmas wish. In return, he hands her a "gift." Which just so happens to be a creepy snow globe from A! Just think about that for a second — at some point A has handed him this snow globe and told him who to give it to, and he's gone, "Yeah, cool." If none of the Liars had made contact with him, then he would have been carrying that thing around with him forever. What would he have done with it? Given it to Mrs. Santa Claus? Worst gift ever.

6. Mona Looks Ridiculously Cool As The Ghost Of Christmas Past

OK, so you totally noticed this. But, still, everything about this look is so on fleek it hurts. It's like a Hot Topic store got snowed in, and Mona crawled out of it looking like an ice-goth champion.

That town is giving off some major adorable old school festive vibes. Remind me to contact my local government immediately and demand that they step up their decorations game.

We all know how much PLL loves to reference classic movies, and this episode is no different. The entire sequence in which Toby watches the DiLaurentis house from his wheelchair, camera in hand, is a pretty spot on shot-for-shot replica in reference to a scene from Alfred Hitchcock's Rear Window .

10. They Don't Notice The Obvious "A" Costume

Come on, ladies! How many times have we established the fact that oversized hood = A? Hanna and Spencer walk right past the most obvious one in the room without even batting an eyelid. I'd be hyperventilating at the mere reference of a hooded top by that point, never mind just casually walking right past one.

Back in the DiLaurentis house, Spencer has to use a flashlight to investigate old newspaper clippings, but Hanna? Nah, she doesn't need any light, silly! Watch in amazement as she manages to read important details very clearly in the total and absolute darkness.

12. Why Does The DiLaurentis Family Have A Creepy Old Mask Collection?

Like, come on. There's Halloween, and then there's just plain weird. Nobody needs to amass a collection of stinky old masks from the dollar store and keep them on display in the spookiest room of the house. That's just crazy.

The average person checks their phone every 5 minutes (this is not an exact statistic, but based on habitual observation of my friendship group). The average person who has spent the past few years receiving death threats, blackmails, and cryptic messages on their phone probably checks it a whole lot more. And, yet, Hanna leaves her phone in the living room, and doesn't even notice? Oh, Hanna, sweetheart. No.

14. Alison Is Basically The Grinch

Just look at her! Tip-toeing around and peeking through windows with a sour look on her face. It's just a surprise that she didn't turn around and start plotting against the Liars in full-blown Dr. Seuss style rhyme.

That is elaborate. It takes me at least a good hour just to untangle Christmas lights, never mind arrange them into extremely precise, time sensitive displays outside of someone's house without anyone noticing.

Ezra and Caleb have never looked happier. Incidentally, they have made my Christmas list for three consecutive years, and Santa has failed to deliver time and time again.

Joyful and triumphant! PLL always has extra little details hidden within every episode to be on the look out for, so remember: stay alert, stay vigilant, look out for those oversized hoods, and keep your phone on you at all times. You'll never know when you'll need to SOS your squad when those hidden details make themselves known.