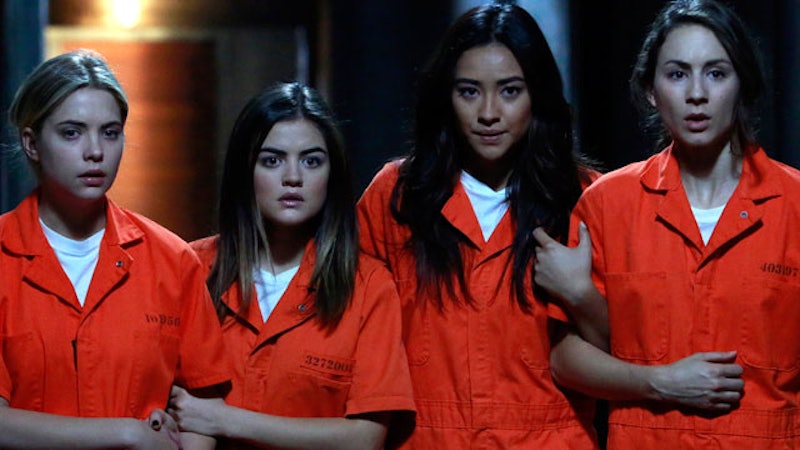 It should come as no surprise that the Pretty Little Liars ladies are the ultimate #squadgoals. So much so, in fact, that the group — which consists of Spencer Hastings, Aria Montgomery, Hanna Marin, and Emily Fields — nearly rivals Taylor Swift's squad in how closely they'll stick together in the face of adversity. (I guess the odds are a little skewed in their favor, though, considering they face a lot more adversity thanks to the fact that they had a psychotic stalker). The Pretty Little Liars ladies might not have been the best at keeping secrets, but they sure were good at a lot of other things. When you take a step back and look at the series, it's difficult to ignore that there really were tons of instances where the PLL squad were total #squadgoals.

Whether Pretty Little Liars began while you were leaving middle school, or leaving high school, the four ladies (and occasionally, five or six) were so relatable to the point where you could see yourselves in them, and your friend circle. Or, maybe you just took a "Which PLL Character Are You?" aptitude test and quickly became addicted to finding similarities in yourself and your friends in order to make all of your squad goals come true. In order to help you relive some of these key moments and rediscover all of the times you wished your squad could be as on point as their's while we wait for the #5YearsForward premiere in January, here's a recap of some of the times where the fantastic foursome were total goals:

When They Rocked The Fashion Show Together

Throwback to when the Liars rocked the runway together for a charity event, and completely stole the show. Well... up until A did, that is. Who wouldn't want to work the runway with their best friends by their side, looking like a million bucks?

When They Gave Each Other Killer Advice

There were so many instances during the past six seasons of Pretty Little Liars when the ladies could have gone crazy with all of the madness that was taking place in their lives. Thankfully, members of the group like Spencer were always quick on their feet to give great adivce when it was due.

When They Kept Their Cool In Scary Situations

We've all had moments with our squad when we probably overreacted in public when we should have/could have kept poker faces. Thankfully, we have the PLL squad to show us how it should be done. I don't know about you and your friends, but if my friends and I received a group text like this one, we wouldn't be able to keep it hush hush.

Ain't nobody messing with their clique. Whether the Liars were facing off against Mona, Charlotte, Jenna, or any of the other A suspects, they always did so as a strong unit. There's power in numbers, and this squad definitely understands that.

When They Bravely Conquered The Fear Of The Unkown

I'm not sure just how brave you and your pack are, but I know mine, and I am pretty sure that they would not be down to open a trunk containing anything from a dead pig to a corpse. Spencer, Emily, Aria, and Hanna had to do exactly this on occasion, though. You know, just casual things.

When They Developed Elaborate Schemes Against Charlotte

The ladies showed us what they were really made of when they plotted against Charlotte with Ali at the dollhouse. A squad that schemes together stays together.

When They Stood By Ali Upon Her Return

Ali put her friends through hell and back before, during, and after her time in Rosewood. The fact that they still stood by her side upon her return shows how strong their bond really was. True inspiration for all ride or dies out there!

There is no crew like Spencer, Emily, Aria, and Hanna. Through all of their trials and tribulations, they stuck by each other and persevered (we'll wait to see what happens when the show returns in January after a time jump) through it all. If that's not the definition of #squadgoals, then I'm not sure what is.