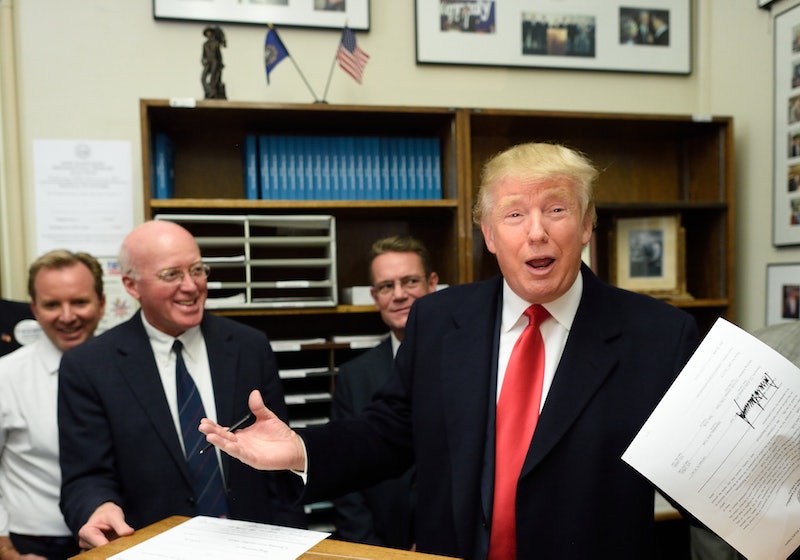 GOP presidential candidate Donald Trump hosted Saturday Night Live and the country seemed to brace itself for, well, something huge. But honestly, it was pretty uneventful. Trump also seemed to barely be in Saturday night's episode, leaving many people to wonder how long was Donald Trump on-screen during SNL, Variety reported that Trump was in 12 minutes of the 90-minute episode. That really does sound about right, since Trump did seem to mostly enter sketches at the end to deliver mean tweets, karaoke machines, and weird laser harp-playing. But hey, at least there was another "Hotline Bling" spoof — you gotta love those.

For comparison, Variety said that comedian Amy Schumer appeared in 25 minutes of her SNL hosting gig earlier this season. Trump's lack of screen time is probably due to the Federal Communications Commission's "equal opportunities rule," which regulates how much time candidates can appear on TV and ensures that they are each getting equal exposure. And if Trump had a huge chunk of sketch time on SNL, his fellow candidates would then be allowed similar time on a broadcast network. According to Mashable, any portions of the show that don't include Trump don't count toward the rule. So perhaps that's why we seemed to see so little of Trump in sketches — I doubt he'd want to give any of his fellow candidates freebie publicity time. Since Trump appeared on TV for 12 minuets, then his fellow candidates will get just that in return, according to the FCC rule. I wonder how they'll all use it — you can do a lot in 12 minutes. You can even host SNL, it seems.

Earlier this fall, candidate Hillary Clinton made a three-minute cameo in a sketch in which she played a bartender talking to Kate McKinnon's Hillary and it triggered the equal time rule as well. So that leaves us with the question: What will Trump's fellow Republican candidates do with his SNL time? I can't wait to find out.